OWINGS MILLS, Md. — A year ago, the core leadership of the Baltimore Ravens‘ defense was ripped apart during the NFL’s negotiating window.

This year, that same time frame marked the start of the Ravens’ rebuilding of an intimidating defensive front, which featured the addition of a couple of skyscrapers. The Ravens signed 6-foot-5 defensive lineman Michael Brockers on Monday to pair with 6-8 defensive end Calais Campbell, who was acquired in a trade from Jacksonville one day earlier.

The last time this defense was on the field, Tennessee Titans running back Derrick Henry was powering his way past Ravens defenders for 195 yards in Tennessee’s 28-12 AFC division-round, upset victory in Baltimore. That doesn’t go over well for a franchise whose identity has been forged in shutting down the run, whether it was Ray Lewis, Haloti Ngata or Terrell Suggs leading the charge.

It makes perfect sense that Baltimore’s first two new additions this offseason were Campbell and Brockers. Campbell was named Pro Football Focus’ run defender of the year. Brockers is “one of the best run-stoppers in the National Football League,” according to Aaron Donald, a two-time NFL Defensive Player of the Year.

In the Ravens’ three losses last season, they allowed rushing yards of 140 (at Kansas City), 193 (home against Cleveland) and 217 (against Tennessee in the postseason). It marked only the second time in the Ravens’ existence that they gave up over 4 yards per carry in a season.

So, imagine what’s going through team officials’ heads when they look at next year’s opponents and see these running backs:

It’s no wonder Baltimore acted swiftly to line up 940 pounds of powerful and disruptive forces in Campbell, Brockers and Brandon Williams. Campbell is one of the premier 3-4 defensive ends, and Brockers replaces defensive tackle Michael Pierce, who is expected to sign elsewhere in free agency.

Last year was an excruciatingly rough start to free agency for Baltimore. Middle linebacker C.J. Mosley and pass-rushers Terrell Suggs and Za’Darius Smith were gone before the Ravens signed anyone.

The Ravens surprisingly became the NFL’s best defense in the final three months of 2019. Baltimore allowed the fewest points and yards during its season-ending 12-game win streak, but the Ravens understood they were talent-laden in the secondary and filled with overachievers up front.

Immediately after last season, Ravens coach John Harbaugh indicated that the reloading of the defensive front seven was “going to be really critical.” 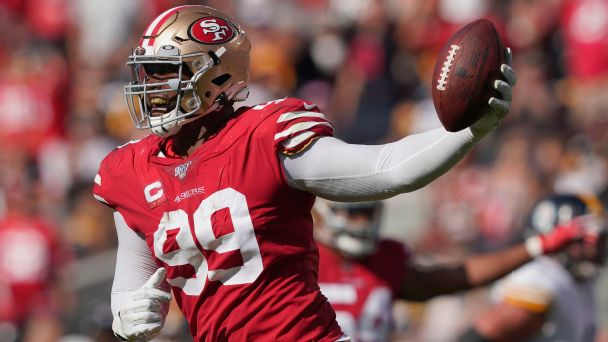 “We know, with our scheme and the way that we get attacked, we know the kind of player that we want,” Harbaugh said.

The Ravens showed how much they wanted defensive linemen, giving Campbell and Brockers a total of $41 million guaranteed. Baltimore reached a two-year, $27 million deal with Campbell and struck a three-year, $31 million agreement with Brockers. The Ravens’ hope is that investment leads to tackles for loss, blown-up blocking schemes and double-teams that set up others to make plays.

Baltimore knows its work is just starting with the front seven. The Ravens could add another pass-rusher after reportedly showing interest in Jason Pierre-Paul, who opted to re-sign with the Tampa Bay Buccaneers.

One of the biggest priorities is finding a middle linebacker behind Campbell and Brockers. Baltimore can bring in an inexpensive veteran or use a first-round pick on LSU’s Patrick Queen or Oklahoma’s Kenneth Murray. Both are fast, sideline-to-sideline tacklers.

The Ravens have the luxury to go young at middle linebacker because of the work they put in this week. Baltimore established the foundation up front with the acquisition of Campbell and Brockers.

Jan Blachowicz says he’s next up for light heavyweight title shot, with or without Jon Jones