THOUSAND OAKS, Calif. — Less than two years after the Los Angeles Rams held a news conference to celebrate signing Todd Gurley to a record-breaking extension, the running back was let go with an unceremonious Thursday tweet. “We have released Todd Gurley,” the Rams announced on their social media feed.

The Rams had good intentions when they signed Gurley in 2018 to the richest running back contract in league history — a four-year, $60 million extension that included $45 million in guarantees.

They wanted to reward Gurley, who over the span of three seasons had earned NFL Offensive Rookie of the Year, NFL Offensive Player of the Year and had established himself as a dependable star after the team relocated to a city full of them.

What you need to know about the Los Angeles Rams:

The irony in cutting Gurley after his fifth season, however, is that the Rams could have allowed him to play out his rookie contract before letting him depart for free agency. Instead, they paid him an extra $22.6 million.

Now the Rams must ask themselves if signing Gurley to an extension was a good move.

“He has meant a lot to my growth as a coach and leader,” Rams coach Sean McVay said in a statement released by the team. “I wish him nothing but the best.”

Rams general manager Les Snead selected Gurley with the 10th overall pick in 2015 and said in a statement, “We knew he was going to be a one-of-a-kind talent that would create special moments on the football field for us.”

He delivered a signature touchdown in a come-from-behind win over the Dallas Cowboys in 2017 that signaled the arrival of the McVay-led Rams. A season later, Gurley dashed for 1,251 yards and scored a league-best 21 touchdowns as the Rams went on a Super Bowl run.

But last season? Gurley wasn’t the same, and it never really became clear if that was due to his surgically repaired left knee, McVay’s decision to incorporate a running back rotation, or perhaps an unfortunate combination of both.

As Gurley struggled through the season, so did the Rams, who finished 9-7 and did not earn a playoff berth.

The Rams on Thursday did not provide a reason for Gurley’s release.

The team attempted to trade him, but it had no takers.

However, by cutting Gurley before 1 p.m. PT, the Rams were no longer on the hook to pay him another $10.5 million in base salary and a bonus, and by designating him as a post-June 1 release, they are able to spread an enormous dead money hit of $17.25 million across two seasons.

The timing to move on from Gurley, who remains their most recognizable star in L.A., is less than ideal as the Rams prepare to open the 2020 season at the new SoFi Stadium.

Momentum for the Rams, who still have seats to sell in their new home, has seemingly come to a halt after they missed the playoffs only 10 months after a lackluster performance in Super Bowl LIII.

And it’s not just fans who are left wondering what went so terribly wrong between the Rams and Gurley in such a short span. Rams players also have expressed varying levels of emotion about his departure. Star defensive tackle Aaron Donald, a two-time NFL Defensive Player of the Year and now the team’s most visible player, shared an angry emoji face on Twitter. Cornerback Jalen Ramsey, who is seeking a record-breaking contract of his own as he enters the fifth season of his rookie deal, offered one word on Twitter following the news Gurley had been cut: “Wow.” 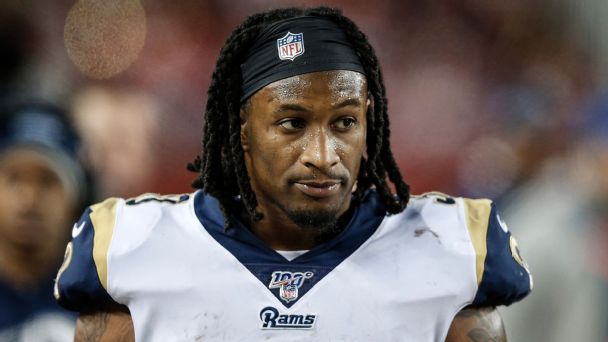 • Rams must learn from bad Gurley deal
• How Bucs build around Brady
• ‘No Fly Zone’ officially over in Denver
• After Slay trade, Lions’ moves have to work
• Free-agent tracker: signings, trades

There’s a chance the Rams will sign a running back in free agency; however, it remains to be determined exactly how much they can spend after re-signing left tackle Andrew Whitworth and offensive guard Austin Blythe, while also acquiring outside linebacker Leonard Floyd and defensive tackle A’Shawn Robinson. The Rams have six picks in the 2020 draft, and they could select a running back to build depth at the position.