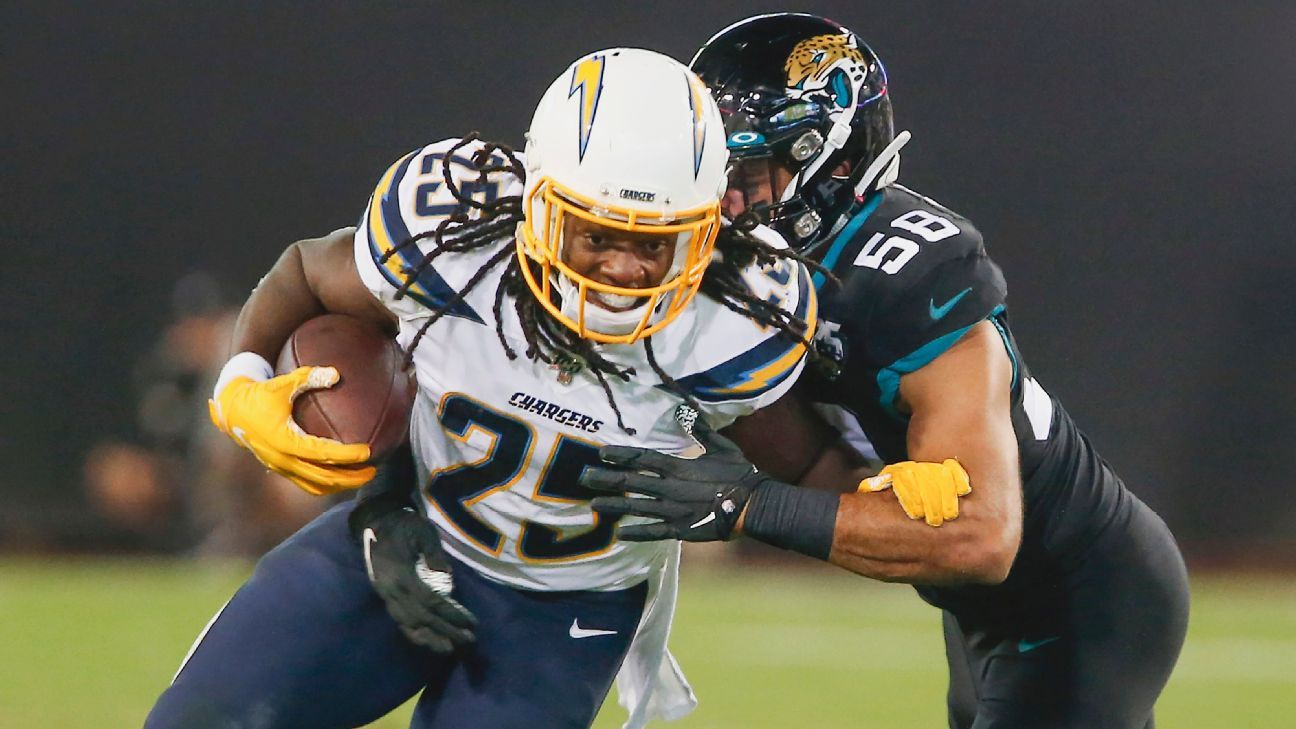 ENGLEWOOD, Colo. — The Denver Broncos went into the offseason in a fervent search for more touchdowns and added running back Melvin Gordon Friday to be part of the solution.

Gordon, a two-time Pro Bowl selection who has 36 rushing touchdowns over the last four seasons and 47 touchdowns overall in those four years, has agreed to a two-year, $16 million deal that includes $13.5 in guarantees, a source confirmed to ESPN Friday. The news was first reported by NFL Network.

The Broncos, with three different starting quarterbacks, finished 28th in the league in scoring last season (17.6 points per game) and scored 16 or fewer points in nine games. The Broncos were 2-7 in those games.

Broncos president of football operations/general manager John Elway made no secret of his intention to try to improve the team’s offense in the offseason as the Broncos missed the playoffs for the fourth consecutive year with a 7-9 finish.

The team did go 7-5 after an 0-4 start and were 4-1 over the last five games when rookie Drew Lock started at quarterback. But coach Vic Fangio replaced offensive coordinator Rich Scangarello with Pat Shurmur early in the offseason and Shurmur has already said he intends for the Broncos to push the ball down the field in the passing game with a productive run game.

Gordon certainly fits the bill, given he’s had four consecutive seasons with at least 41 catches. Gordon and Phillip Lindsay figure to now get the bulk of the snaps at running back for the Broncos, who traded fullback Andy Janovich to the Cleveland Browns earlier this week.

Lindsay led the Broncos in carries (224), yards rushing (1,011) and rushing touchdowns (seven) last season. Elway said earlier this offseason the Broncos, after Lindsay’s back-to-back 1,000-yard rushing seasons, would like to re-work his contract.

Lindsay made the Broncos roster as an undrafted rookie in 2018 and is slated to earn a $750,000 base salary this season.

While Gordon continued to move up the all-time lists for the Chargers, the 2019 season was a rocky one for him. However, he finished the season healthy for the first time in his career.

Gordon missed training camp and the first four games of the season over a contract impasse in which he wanted an extension that would have put him among the league’s top-paid running backs. He ended the holdout on Sept. 26 after 64 days.

As a result, Gordon, who turns 27 on April 13, got off to a slow start during a difficult season. He finished with 612 rushing yards — averaging 3.8 yards per carry — and nine total touchdowns in 12 games. He added 42 catches for 296 receiving yards.

Gordon, who hadn’t lost a fumble since the 2016 season, fought back tears on the sidelines after a late goal-line fumble in a Week 7 loss to the Tennessee Titans. It was one of three fumbles on the season for him.

He also had a difficult year off the field, dealing with the deaths of two uncles and a close friend.

His 35 touchdowns over the past three seasons ranks fifth in the NFL over that span. Gordon also has 3,864 scrimmage yards during that same time frame, which ranks ninth.