Washington Football Team defensive end Chase Young was different from the start. He was 6 years old, quarterbacking a team of 9- and 10-year olds, when he made a promise to his parents: They wouldn’t need to pay for college.

In hindsight, Young, the No. 2 overall pick in the 2020 NFL draft by Washington, undersold that promise. His parents certainly didn’t need to pay for college. But he left Ohio State as more than a kid who arrived on scholarship.

“Of all the players we had, including the Bosa brothers [the Chargers’ Joey and the 49ers’ Nick], as far as size and speed, Chase might be the most talented of all of them,” former Ohio State coach Urban Meyer said, “which means he’s probably one of the most talented players to come out of college in the last decade. All the intangibles are there, also the tangibles.”

That’s why Washington drafted Young; Not just because of his talent, but because of his approach. For a franchise and fan base desperate for success, Young, raised in the Washington, D.C. suburbs, represents hope. Washington hasn’t won a playoff game since 2005; it has two winning seasons in the past seven.

It has a new coach in Ron Rivera and a young core of players. Washington’s defensive front is expected to include former first-round picks Ryan Kerrigan (2011), Jonathan Allen (2017), Daron Payne (2018) and Montez Sweat (2018). But in Young, they hope they have someone who is just … different.

“He’ll be in the conversation with the Von Millers and guys like that,” ESPN NFL analyst Marcus Spears said of Young, who missed some practice time last week with a sore hip. “He was ready last year to be a superstar in the NFL. He is everything you want a guy to be at that position.”

The first sign Young was different came during his first season of football. At age 6, he memorized all 21 plays in a week. He’d get upset when others didn’t match his preparation and forgot the plays. He would work out, doing push-ups and agility drills without any urging.

“He worked hard from an early age,” his mother, Carla, said. “We never had to tell him to work out or exercise. We almost had to threaten him to sit down.”

Carla said she and her husband, Greg, also hammered home a message. They would watch a great player in any sport and deliver a mini-sermon about what that player had to do to become that good.

“We always talked about being great,” Carla said. “It was him being taught how you’ve got to sacrifice and put in the work, because anything easy is just average. To become great you have to make big sacrifices and work really hard — much above average.”

At age 7, Chase was cutting the grass and ironing his own clothes. He had regular household chores. And, in what probably makes him an anomaly, he did not own a cell phone until high school or have a TV in his room.

And Young’s parents, mindful of former NFL running back and Heisman Trophy winner Herschel Walker’s regimen of push-ups only, didn’t want Young lifting weights until high school; he didn’t work with a trainer until he was nearly in college.

“If you want it bad enough you should be motivated to do it yourself and he was,” Carla said.

Young took that mindset to Pallotti High School in Laurel, Maryland, where, he said, he found more mentors — coaches Justin Winters and Ian Thomas, both of whom played football in college (Winters at Buffalo and Thomas at Illinois).

They designed daily workouts meant to challenge the players.

“We made them impossible to complete and they never quit,” Thomas said. “Chase would look remarkable on the first two or three reps and once he got tired it took a lot for him. He had to train himself. A lot of people say he has God-given talent, but he really worked for everything.”

Young continued to work throughout high school — his final two years were spent at DeMatha — and then at Ohio State. He certainly didn’t carry a grudge against Thomas for pushing him so hard; he is now Young’s manager.

On draft night, after Washington picked Young, his defensive line coach from college, Larry Johnson, surprised him with a video call.

“We laughed and giggled and talked about goals he had set for himself,” Johnson said. “And he said to me, ‘I’ve got to get back in the lab.'”

“It’s not so much what you hear, because everyone can talk it,” Washington defensive coordinator Jack Del Rio said. “It’s the look in his eyes, it’s the way he conducts himself on the field and his interaction with other coaches and with other players. It’s on point; it’s serious; it’s focused. Like a man on a mission. He’s intent on playing really good football and earning his way.”

Young has a habit of stating his desire to be the best. When he finally started working with a trainer — Martin Gibson in November of his senior year at DeMatha — he made a prediction.

“He said he’d be the best guy I ever trained,” Gibson said.

And when he got to Ohio State, he made a similar declaration to Johnson.

For Gibson, based in Maryland, that meant Young had to top Saquon Barkley, the former Penn State running back who is now with the New York Giants.

“It’s always been a debate between him and Saquon,” Gibson said shortly before the draft in April. “I said, ‘If someone takes you at No. 1, then you would be the best.’ But I was also telling [Young] even if you get picked [No. 1], Saquon was rookie of the year. It comes with some pressure.”

“His numbers speak volumes about what he’s done,” Johnson said.

Those numbers are a result of never being content with his play. After a three-sack game against Wisconsin last season, Young relayed frustrations to Gibson in a postgame video call.

“He said, ‘I had two more sacks I could have gotten,'” Gibson recalled. “He was upset about that. Everyone’s praising him, and if you had had a conversation with him, you’d be looking at him like ‘Chase, that’s crazy.'”

When Young arrived at powerhouse DeMatha for his junior year, coaches put him with the second defense, behind a senior. Young said nothing; he did as he was told. Defensive line coach William Weathers said his assistant asked him, “How long we gonna play this game?”

“I played it off,” Weathers said. “He just got here; he has to earn the right to be a DeMatha guy.”

On Day 2, Young was with the starters. It was an easy decision; Young’s talent was obvious.

Still, his coaches would sometimes play mind games. During a first-round playoff game against Good Counsel his senior year, Young was pulled aside by Weathers during a timeout to whisper a falsehood and a plea.

“I said, you haven’t made a play all day, which was completely false,” Weathers said. “He made a ton of plays throughout that game. So we go back out after the timeout, they drop back to pass and the dude [forces a fumble], scoops and scores. That sealed the game for us. It was like, ‘Wow.’ Just that kind of motivation, that way to respond. He was like, ‘Shut up coach Will, I got this.'” 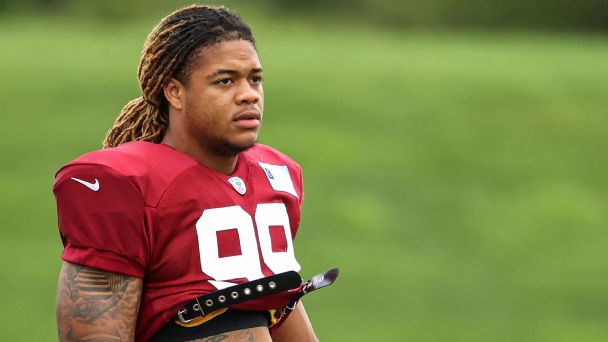 “He wanted to know everything,” Johnson said.

By the end of his three years at Ohio State, Young asked Johnson to put together a folder of NFL pass-rushers — Khalil Mack, Miller, Julius Peppers and the Bosas.

“I’d do a lot of watching of old guys,” Young said.

Young and the Bosas were taught the same techniques, so Young wanted to see how Joey Bosa executed with the same moves in the NFL.

“You don’t have to push the great players,” Johnson said of Young. “They want it and want it as much as possible. Every Thursday, ‘Coach, can we watch film after practice?’ He’ll text, ‘Can we watch tape?'”

They would focus, for example, on Mack’s bend off the corner. And they critiqued Young’s film as well.

“A lot of times we’d go frame by frame with Chase, slow the video down; look at his techniques and flaws,” Johnson said. “He learned so much by slowing the film down.”

Young said film work reduced his nervousness before games; it also allowed him to know some plays before the ball was snapped.

“I kept doing it and my game blossomed, so it would be dumb to stop,” he said.

He is doing the same in the NFL, chatting up veterans like Kerrigan for tips.

“I’ve been around Chase a lot in these first couple weeks,” Kerrigan said. “He’s a guy who wants this information. He wants to know how he can be great, so I want to impart as much as I can on him and help him accomplish all he can accomplish because … the sky’s the limit for that guy.”

Said Washington linebacker Kevin Pierre-Louis: “I’ve been in the league going on seven years now … so I’ve seen a lot of first rounders. I’ve seen a lot of highly touted people coming in and he has a really good head on his shoulders, and you can’t really ask for more from a guy like that who has the physical capabilities.”

It’s easy to see why Young is confident on the field, but it manifests itself in other arenas. He has no doubts he could have played basketball instead.

“If he wanted to be a Division I basketball player, he could have been,” DeMatha basketball coach Mike Jones said. “You could see his talent and size and his work ethic.”

• The NFL’s false-positive testing scare
• NFL coaches are ‘caught in middle’
• List of NFL players who are opting out
• Could players wear masks in-season?
• Football historians on 1918 pandemic
• Coronavirus-impacted schedules

It also comes through in other ways. Like singing.

“We’d have a water break and he’s singing,” Weathers said. “He would consistently sing. I was like, ‘Chase, you can’t sing.’ He was like, ‘Coach, I got skills; I got vocals.’ He would do it in-between drills. Sometimes I’d hear it on the sidelines now and then.”

That’s not surprising. Young played the piano, the saxophone and the violin. He was in the choir in the ninth and 10th grades, and said he was joined by only one or two other boys. He acted in plays from elementary school into high school. Carla wanted her kids to perform in front of crowds.

Young isn’t shy, and his confidence translates to all that he does.

As a junior in high school, he and good friend Markelle Fultz stated goals that would be difficult to achieve: Both wanted to be the No. 1 pick in their respective sport. Fultz achieved that in the NBA when the Philadelphia 76ers picked him first in 2017; Young nearly did so.

“He had sleepless nights and early mornings,” Young said of Fultz. “That’s what it takes to be the best and that’s what I tried to do in high school.”

And college. Next up: the NFL.

“He’s come in, he’s done some great things, he’s done everything we’ve asked,” Rivera said of Young. “The more reps he gets, the quicker he’s going to adapt.”

Said Young: “You get drafted with that second pick … people try to label you with the gold jacket. I try to mute everything out. Hopefully my NFL career will be pretty good.”

He knows what must be done, saying simply: