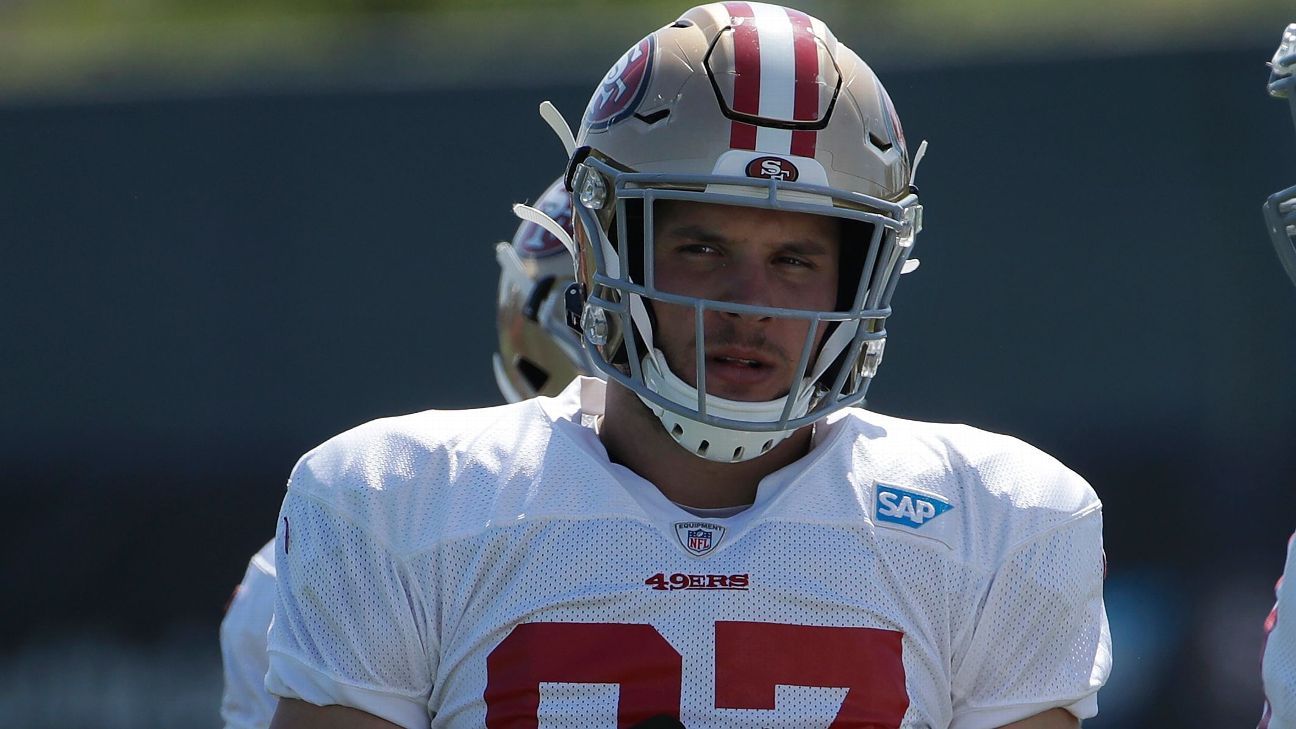 SANTA CLARA, Calif. — The San Francisco 49ers were without defensive end Nick Bosa and rookie receiver Brandon Aiyuk for Tuesday’s practice, something that is expected to be the norm for the foreseeable future.

Niners coach Kyle Shanahan said Tuesday afternoon that Bosa and Aiyuk will be “week-to-week” as Bosa deals with a muscle strain in his leg and Aiyuk recovers from what Shanahan called a “mild” strain of his left hamstring.

According to Shanahan, Bosa complained of soreness in his legs on Friday. The team gave him Saturday off, calling it a maintenance day. But when Bosa said the issue got worse even with the day off, the team sent him for an MRI, where the strain was discovered.

“He’ll end up being week-to-week now,” Shanahan said. “[I’m] glad we ended up getting the MRI because there was more to it. He was about to go out and practice through it because he didn’t think it was much and fortunately we got that and we were able to prevent him from hurting it worse.”

Aiyuk’s injury was a bit more obvious as he suffered the hamstring strain while tracking a deep pass from quarterback Jimmy Garoppolo late in Sunday’s practice. Aiyuk pulled up before getting to the ball and immediately grabbed for the back of his left leg. He watched the rest of practice from the sideline with his helmet off and then watched all of Tuesday’s practice from the sideline as well.

Shanahan said the fact that Aiyuk’s hamstring strain is considered mild was positive because the team initially feared it might be worse.

“Aiyuk has been in great shape, he’s working his tail off out there and sometimes that stuff just happens while going through a training camp,” Shanahan said. “That has been a challenge this training camp not being quite as long, so it doesn’t leave much room for error with that type of stuff but it happened to Bosa last year. When you’ve got guys who come in prepared, that gives them a chance when they don’t get all these reps. If Aiyuk didn’t come in the way he did come in, he’d be screwed now with an injury. That’s what’s been cool about him that he’s given himself a chance to overcome something like this. I think we got pretty good news with it.”

Aiyuk’s injury is the latest in a litany of issues the Niners have had at wide receiver. Deebo Samuel is working his way back from a Jones fracture in his right foot and though the team is hopeful he will be ready for week 1, he has yet to practice.

The 49ers lost wideout Jalen Hurd to a season-ending ACL injury earlier in camp, Richie James Jr. is likely to miss the start of the season with a right wrist injury and veteran receiver Travis Benjamin opted out before the season. Those issues led to the signing of veteran receivers Tavon Austin, Jaron Brown and J.J. Nelson and the Niners are expected to audition four more receivers — Johnny Holton, River Cracraft, Justin Hardy and Kevin White — in light of Aiyuk’s injury.

Ford appeared to tweak the calf during a one-on-one pass rush drill early Sunday. He got some work on the side field during Tuesday’s session.

Running back Raheem Mostert also did not participate in Tuesday’s practice but Shanahan said Mostert had just earned a veteran’s day off and there’s no injury issue.