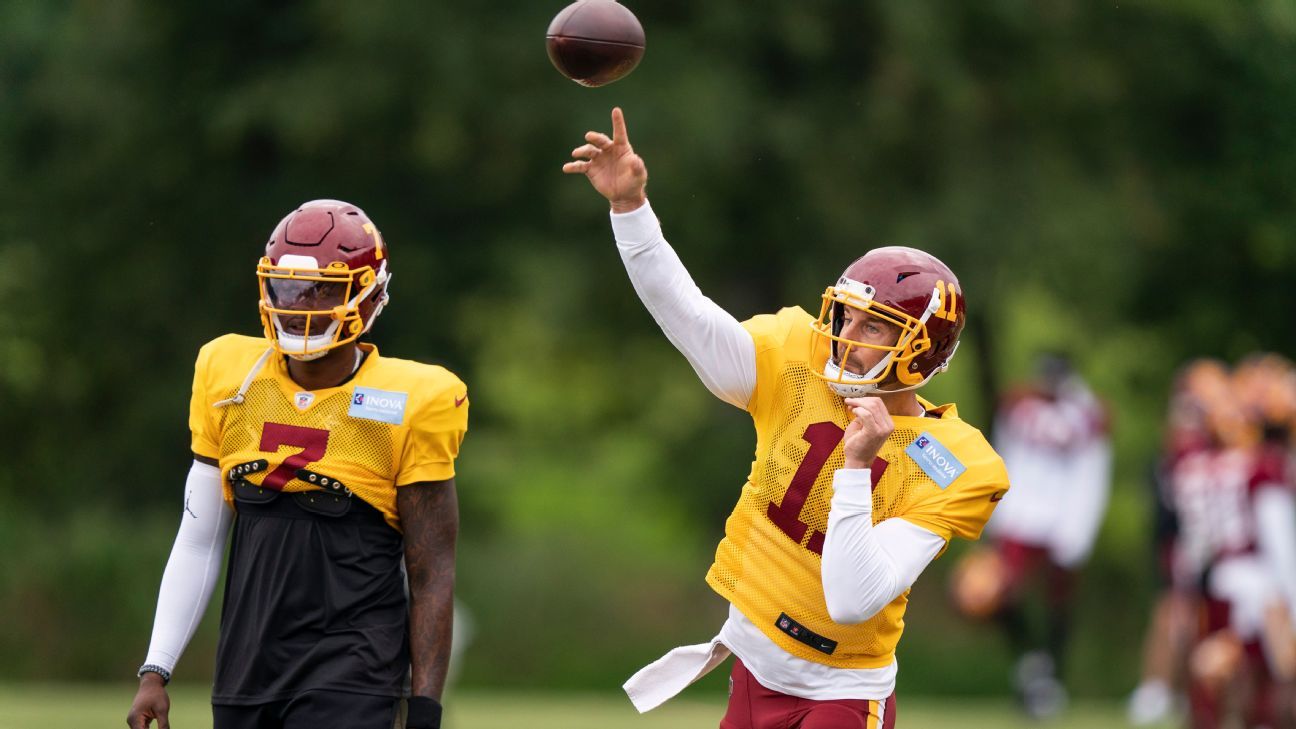 Washington Football Team quarterback Alex Smith participated in full-team work Saturday for the first time in training camp, yet another pivotal step in his attempt to return from a gruesome leg injury.

Washington was not in full pads so there was no contact. But coach Ron Rivera called it a “very big step.”

“It’s back to 11-on-11, bodies around you,” Rivera said. “Sure we were in shells, but the fact that he was doing something with 11 guys on the field at the same time is a big step in the direction we want to head.”

Smith suffered a broken tibia and fibula in his right leg in a November 2018 injury. He was cleared for football activity by the team on Aug. 16 and has slowly increased what he can do, graduating from just individual work to seven-on-seven and then, on Aug. 20, nine-on-nine work. The latter was added to help him get used to more pass-rush pressure.

Rivera also said he’d like to see Smith in an 11-on-11 full-padded practice at some point in the next week. Teams must cut down to 53 players by 4 p.m. Sept. 6. Washington must decide whether Smith can play if needed. His base salary of $16 million already is guaranteed; he’ll count $21.4 million against the cap regardless of whether he’s on the roster.

Participating in full-pad, 11-on-11 work will help Washington decide what direction to take with Smith.

“It’s to gauge his confidence in himself,” Rivera said. “It’s an opportunity for us to gauge his total movements with 11 players on both sides, see how it goes. The hope is that in the next few days we can continue to progress with him.”

On Friday, Rivera said increasing Smith’s work will be based on a combination of what they are seeing as well as how he is feeling. Smith has not missed a day of practice. During nine-on-nine work, Smith has shown that he can still throw on the run. Once, he had a pass-rusher push an offensive lineman back into his left — and non-injured — leg. Another time, a defender bumped into his right leg as Smith stood in the pocket.

The question, even internally for Washington, is whether he can play with the same suddenness as in the past and protect himself.

Because of inclement weather, Washington was forced to practice indoors Saturday. That meant no media could watch, though the team’s public relations staff provided a detailed report. According to the report, Smith took three snaps in the 11-on-11 work in the red zone. He handed the ball off twice and then threw a five-yard checkdown to running back J.D. McKissic.

Smith has taken reps only with the second unit, although Rivera said they could put him with any group and just want to find out where he’s at in his recovery. Dwayne Haskins has taken all the first-team reps during practices open to the media. But Saturday provided another chance for Smith and teammates to celebrate another step.

“Just seeing him scramble around, running, not favoring anything on his body, playing free,” McKissic said, “it’s exciting to see. I’m happy for him.”

Washington held three other 11-on-11 periods in which Smith did not take any snaps.