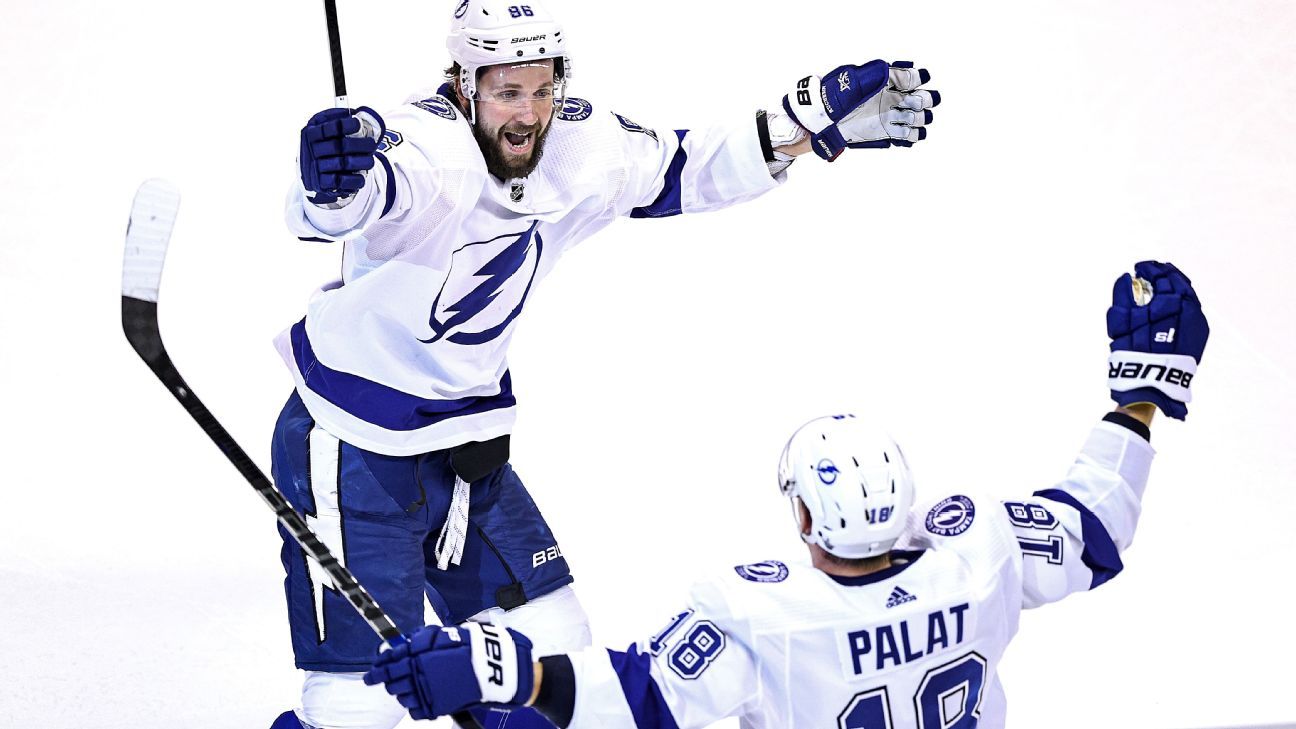 TORONTO — Well-rounded winger Ondrej Palat is scoring, reigning MVP Nikita Kucherov is defending and the Tampa Bay Lightning have taken over their series against the Boston Bruins.

Palat scored two goals to give him four in the past three games, Kucherov was part of a strong defensive effort in the third period and the Lightning beat the Bruins 3-1 on Saturday to grab a commanding 3-1 lead in their second-round series. From goaltender Andrei Vasilevskiy on, Tampa Bay is clicking like the Stanley Cup contender it was supposed to be and now stands one victory away from eliminating Boston and moving on to the Eastern Conference final for the second time in three years.

This matchup between the top two, seemingly even, teams in the Atlantic Division has been all Lightning since the Bruins won Game 1. They’ve taken the past three, notably since Palat scored the Game 2 overtime winner.

“We’re playing with confidence,” Palat said. “We don’t cheat on the ice. We’re doing it the right way. We’re staying on the right side of the puck. We try to not turn the puck over, and I think all four lines are playing good hockey and it’s huge.”

Vasilevskiy made 29 saves and Norris Trophy finalist Victor Hedman scored a pinball, bouncing goal on Boston goaltender Jaroslav Halak, who has started every game since starter Tuukka Rask opted out of the playoffs in the middle of the first round. Halak, who was pulled last time out Wednesday, allowed three goals on 26 shots in Game 4.

Bruins coach Bruce Cassidy said of Palat’s second goal that went over Halak’s glove, “We need that save.” His bigger frustration was a five-minute major penalty called on Nick Ritchie for a questionable hit on Tampa Bay’s Yanni Gourde that paved the way for Hedman’s goal.

Ritchie appeared to hit Gourde from behind a few feet away from the boards, and Gourde went left-shoulder-first into the boards. Officials gave Ritchie the major after reviewing video, and Gourde left before returning early in the third period.

“Clearly, Gourde was down on the play, and he’s a good player — real good player for them — clever, obviously,” Cassidy said. “He got them on the power play for five minutes, he finished the game, had no problems in the third period. I didn’t agree with the call.”

Ritchie said he was trying to finish his check after Gourde got rid of the puck. Still, he could face suspension, which Cooper said might be the case in the regular season, but he wondered if the major penalty might get Ritchie “off the hook” of missing Game 5.

Boston got a power-play goal from Jake DeBrusk in the third period to end the shutout but couldn’t come back from a 3-0 deficit. The Lightning didn’t allow a Bruins shot on goal in the final five-plus minutes, with the line of Palat, Brayden Point and Kucherov playing a big chunk of that time.

“Kuch was playing a great game today,” Palat said. “You could see it from the beginning when he hit (Bruins captain Zdeno) Chara, when he had a great forecheck. When your star player is doing those little things, everybody’s following him, and I thought he had a huge game.”

Playing without injured captain Steven Stamkos, the Lightning haven’t missed a beat. After they got swept in stunning fashion out of the first round of the 2019 playoffs, when the Bruins went to the Stanley Cup final, they look ready to take another big step forward.

GAME NOTES
Tampa Bay stuck with the same lineup as Games 2 and 3, which meant using seven defensemen and 11 forwards. … Boston went back to the traditional 12 forwards and six defensemen lineup, with Karson Kuhlman and Connor Clifton replacing Jeremy Lauzon and John Moore.