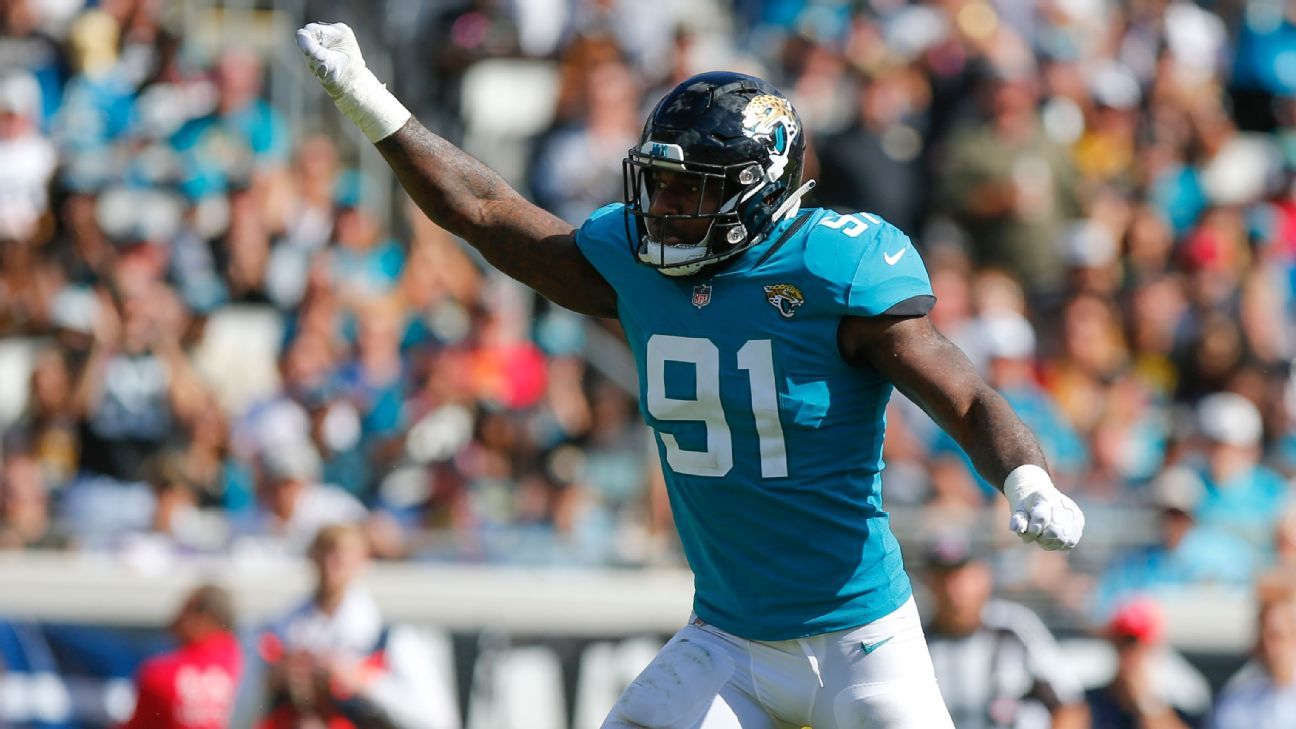 The Jacksonville Jaguars have agreed to trade franchise defensive end Yannick Ngakoue to the Minnesota Vikings for a 2021 second-round and a conditional 2022 fifth-round draft pick that could go as high as a third-round pick, league sources told ESPN’s Adam Schefter.

Ngakoue still has to sign his franchise tender, but the trade is now in place and he is expected to join the Vikings.

Ngakoue, 25, and the Jaguars will have to coordinate when he is going to sign his franchise tender Sunday so he can be traded to the Vikings. Because Ngakoue did not sign the tender before the July 15 deadline, he must play this season under the tag, valued at $17.8 million, before he can sign a long-term deal.

Sources said Ngakoue will restructure his one-year deal with the Vikings to create more cap space. The Vikings entered Sunday with approximately $12.9 million in cap space, according to the Roster Management System.

He will give the Vikings a young, proven pass-rusher opposite Danielle Hunter, one whose work ethic and intensity have always been among the most respected in Jacksonville’s locker room. Ngakoue also should ease the loss of four-time Pro Bowler Everson Griffen, who signed a one-year deal with the Dallas Cowboys earlier this month.

Ngakoue — whom the Jaguars drafted in the third round in 2016 — has been unhappy with the team since July 2019, when then-executive vice president of football operations Tom Coughlin abruptly broke off negotiations with Ngakoue’s camp. The Jaguars reportedly offered Ngakoue a deal that would pay him $19 million annually, but the pass-rusher turned it down and he played the 2019 season — after an 11-day training camp holdout — for $2.025 million, a considerable bargain for a player who had racked up 29.5 sacks in his first three seasons.

He suffered a hamstring injury early in the season that limited his production but still finished with eight sacks in 2019 and ranks second in Jaguars history with 37.5 after only four seasons. In addition, his 14 forced fumbles from 2016 to 2019 rank fourth in the league behind only Chandler Jones (17), Khalil Mack (17) and T.J. Watt (15).

Ngakoue also was directly responsible for five of the 12 defensive touchdowns the Jaguars have scored since 2016: a pick-six, a fumble return and three forced fumbles on sacks that other players recovered for TDs. Another forced fumble resulted in a touchdown in the 2017 playoffs.

He had been vocal about his dissatisfaction with the Jaguars, especially on social media, and his desire to play elsewhere. He announced in March via Twitter that he told the team he wasn’t going to sign a long-term deal and in April went on a Twitter tirade against Tony Khan, the son of owner Shad Khan and the team’s senior vice president of football administration and technology.

Ngakoue is the second starter in the past year to essentially force his way out of Jacksonville. Pro Bowl cornerback Jalen Ramsey seemingly faked a back injury to get traded to the Los Angeles Rams in October.

He also is the latest piece of Jacksonville’s 2017 defense, which helped the team make the AFC Championship Game, to hit the road. Ngakoue, Calais Campbell, A.J. Bouye, Marcell Dareus, Ramsey, Malik Jackson, Tashaun Gipson, Barry Church and Dante Fowler — a list that includes seven former Pro Bowlers — have been traded or cut in the past two years.

Jacksonville selected Ngakoue’s replacement, Josh Allen from Kentucky, with the seventh overall pick in the 2019 draft and added pass-rusher K’Lavon Chaisson this year. Allen had 44 tackles, 10½ sacks and two forced fumbles as a rookie and made the Pro Bowl as an alternate.

The Jaguars are loaded for the 2021 draft, in which many expect Clemson quarterback Trevor Lawrence to be the No. 1 pick. According to ESPN’s Football Power Index, the Jaguars have a 24% chance to get the top pick, the highest percentage in the league.

Jacksonville is now scheduled to have six picks in the first four rounds — two first-round picks, a second, a third and two fourths.