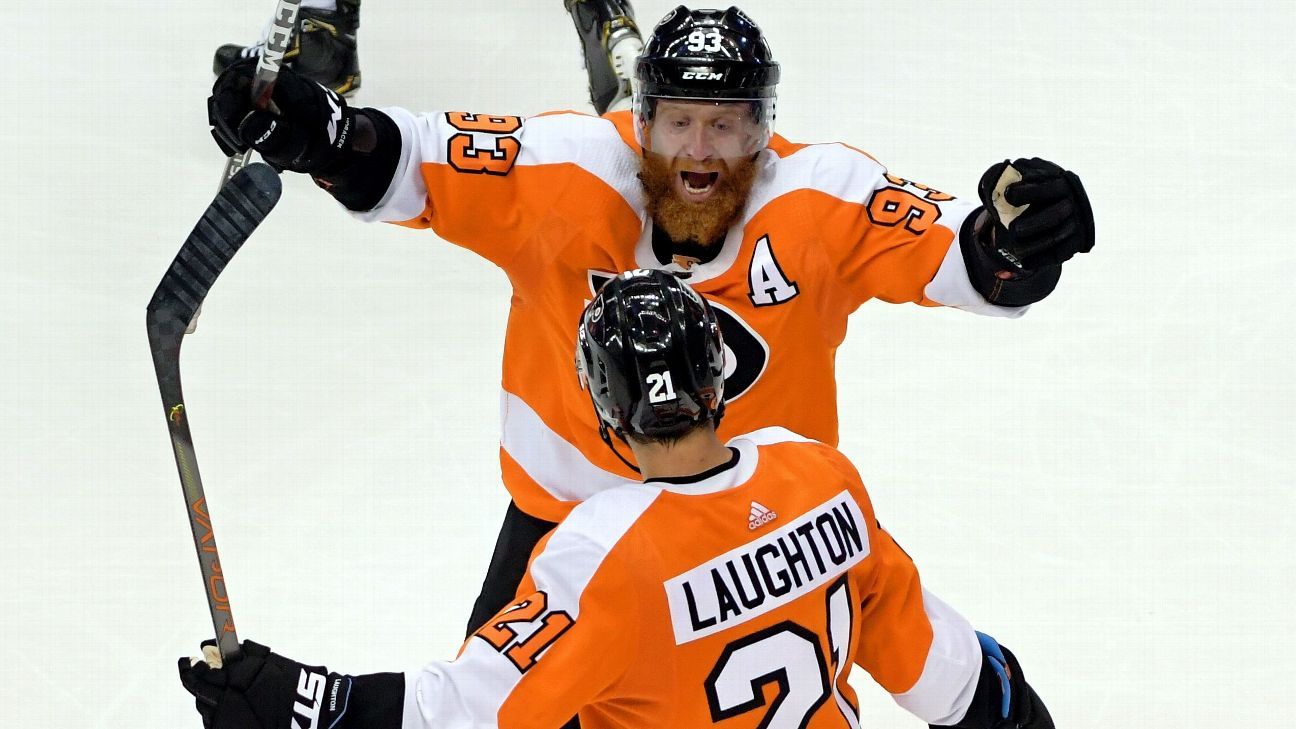 The Philadelphia Flyers and their big-boy pants are sticking around the Toronto bubble for at least one more game.

Scott Laughton scored on a redirect in overtime after Philadelphia blew a late two-goal lead, helping the Flyers stave off elimination with a 4-3 win over the New York Islanders on Tuesday night.

In Game 2, Philadelphia also led 3-1 in the third period before the Islanders rallied. The Flyers won that game in overtime before dropping the next two to New York.

On Tuesday, facing elimination, there was more at stake, and coach Alain Vigneault called on his top players to “put on their big-boy pants” for Game 5.

“The big-boy pants is something they’re aware of,” Vigneault said. “They don’t need me to motivate them. They’re a group the motivates themselves. They’re got a lot of pride and a lot of compete.”

Claude Giroux and James van Riemsdyk — the latter of whom has been a healthy scratch at times this postseason — responded to their coach’s urging with their sticks, scoring their first postseason goals after New York went up 1-0 on Josh Bailey‘s first-period goal. Matt Niskanen added his first playoff goal early in the third period to put the Flyers up 3-1.

The scrappy Islanders made a big push late, though, tying it on goals by Brock Nelson and Derick Brassard 93 seconds apart.

Flyers goalie Carter Hart, who stopped 29 shots, made some spectacular saves in overtime, and Laughton redirected Ivan Provorov‘s at 12:20 to pull the Flyers within 3-2 in the best-of-seven second-round series.

Game 6 is Thursday in the Toronto bubble.

“In games like this, you need everyone pulling the rope and moving in the right direction,” van Riemsdyk said. “Everyone did their job and played their role tonight.”

The Islanders put themselves in position to clinch the series with consecutive wins with different goalies in Games 3 and 4.

Semyon Varlamov returned to the crease after Thomas Greiss stopped 36 shots in Game 4 and was sharp early as the Flyers controlled play much of the first period.

The Islanders opened the second period on a power play after managing four shots in the first and immediately capitalized. Bailey scored on a wraparound through a pile of bodies in the crease, a goal upheld upon review for goaltender interference.

The Flyers withstood another New York push in the second and Giroux scored late, redirecting a shot by Philippe Myers through Varlamov’s legs for his first goal in 26 playoff games.

Van Riemsdyk gave the Flyers their first lead since early in Game 3, one-timing a pass from Laughton past Varlamov’s glove side 2½ minutes later.

Niskanen made it 3-1 following a New York turnover in the third period, beating Varlamov with a slap shot from the right circle.

Nelson seemed to catch Hart off guard with a one-timer between the circles with 4:14 left in regulation, and Brassard sent it to overtime with a goal off a nifty feed by Cal Clutterbuck.

Varlamov stopped 29 shots but had no chance on Laughton’s redirect through traffic.

“We came back in the game; we showed some character and it could have gone either way,” Brassard said. “It wasn’t our night and we’ll focus on what we need to do in the next couple of days.”

Islanders center Mathew Barzal took a stick to the face in the third period and did not return. Flyers forward Sean Couturier also left the game early, after a collision in the second period.