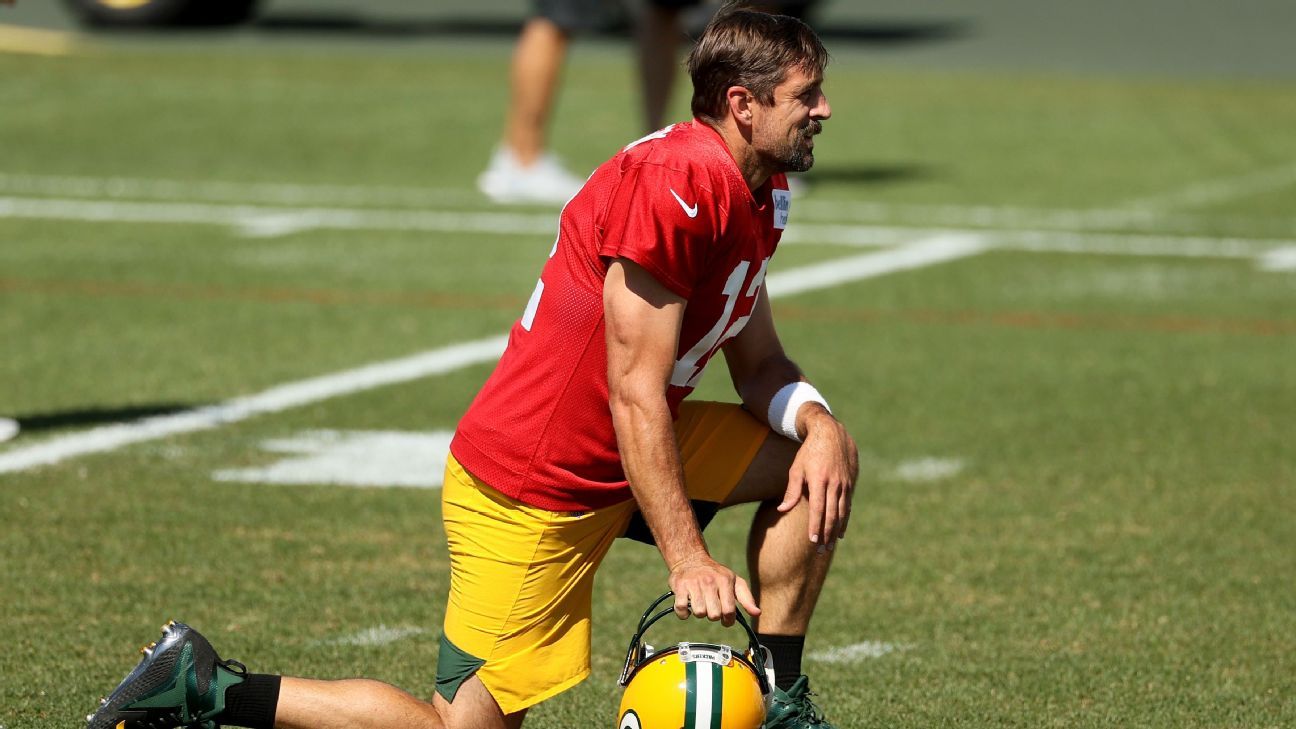 GREEN BAY, Wis. — Aaron Rodgers had every reason to come to training camp grumpy, especially considering the Green Bay Packers picked his possible replacement, Jordan Love, in the first round of the NFL draft this year.

Yet Rodgers, according to those closest to him, has been anything but that way throughout training camp after a long offseason away during the coronavirus pandemic, which forced the NFL into a virtual spring program.

It was first mentioned by backup quarterback Tim Boyle early in camp and reiterated by veteran tight end Marcedes Lewis a week later, and Rodgers admitted Wednesday that they’re right.

“I think, just like the 2011 offseason, the extra time was beneficial for those of us who chose to work on ourselves during that time,” a reflective Rodgers said Wednesday as the Packers entered their final days of summer practices. “And I think that was the important thing. I think the more we work on ourselves and we learn to love ourselves, the more we can love others better. And when you’re feeling good about yourself and confident and loving others, it’s naturally going to put you in a better mood.

“I think my quality of life has been pretty high, based on some important decisions I’ve made in my own life,” Rodgers added without specifying what decisions he has made. “And just finding my center a little bit better during these strange months during the offseason. So I came in excited to see the guys, excited to continue to build relationships with them and get to know them. I have a lot of close friends — you mentioned a couple of them in ‘Big Dog’ and Tim — on this squad, but I always enjoyed looking forward to seeing the guys and catching up and seeing how they’re doing.”

Rodgers split with girlfriend Danica Patrick this offseason. And there was an even bigger spotlight on Rodgers after the Packers traded up to draft Love at No. 26 overall. But by most accounts, Rodgers has treated Love no differently than any other backup.

“Aaron’s been awesome,” Boyle said last month. “To be quite honest with you, this is probably the best mood I’ve seen him in training camp. Not that he’s been in bad moods, but he’s spunky, he’s throwing jokes around. I think part of it is the comfort level of the offense. Like myself, he doesn’t really have to think about formations, that kind of stuff. But he’s in a great mood. We joke around 24/7, and Jordan brings a nice aspect into the mix. But yeah, Aaron’s been great. He’s not grumpy at all.”

Added Lewis: “I think Tim hit it right on the nose. When you’re in a position that Aaron’s in, done so much and accomplished so much in his life and in this league — MVPs, Super Bowls — there’s no reason to be insecure or unsure of anything. Him and I have had conversations about it; we text about it all the time. Aaron is in control of his process. Nothing on the outside — all external influences don’t really matter.

“He’s very internally motivated, and right now, I think that’s what you’re getting out of him, is that he believes he’s one of the best. And he’s gonna continue to prepare that way and play that way, and the things that he can control, he’s gonna control those, and the things that he can’t control, he won’t. You don’t control what the front office controls, and your attitude and your effort are the two most things you have complete control over when you wake up in the morning. And he does an amazing job of controlling those attributes, and it spreads throughout the team and through the locker room.

“There’s really no bad blood nowhere, so I think he’s understanding of what it’s gonna take to get to where we wanna go, and he’s willing to do whatever it takes.”

After a slow start to camp in which he threw four interceptions in a three-practice stretch, Rodgers honed in during the last two weeks of camp. He mentioned midway through camp that he spotted something from film of 2010 — the Super Bowl season — and ever since then, he has been sharp in practices.

Then there’s the comfort level in the second year of coach Matt LaFleur’s offense despite the truncated offseason. Rodgers’ first year under LaFleur produced the lowest Total QBR (50.4) of his career, and while the Packers went 13-3 and reached the NFC title game, the team never found a consistent groove on offense.

“The other part was just taking a critical look at my play the last few years and then going back to some previous years about what I felt like when I was playing really, really well. What was I doing slightly different than what I’ve been doing the last five years?” Rodgers said. “And I picked up on some things and tried to start incorporating them into my daily routine, and you pair that with a positive attitude and a comfort in the offense, it’s not surprising to me how camp has gone.”

About the only thing that seemed to concern Rodgers was the right side of his offensive line. The Packers most likely will open the season without Billy Turner, who started at right guard last season but was in the mix to play right tackle. The knee injury he suffered on Sunday could keep him out for the start of the season on Sept. 13 at Minnesota.

Rick Wagner, signed in the offseason to compete with Turner, has also missed time in camp because of a left arm injury. The Packers let longtime starting right tackle Bryan Bulaga leave in free agency to sign with the Chargers.

“It’s slightly unsettled,” Rodgers said of the right tackle spot. “I would say strong to quite strong in the unsettled department. It’s just what we’ve got to figure out at this point. You know, we’ve had some injuries to both Rick and Billy during training camp, so I’m sure those guys have a plan for whatever situation comes up. It is what it is at this point. We’ve got to figure this out. It might be just trial by fire come Week 1, but we’re going to need to be seven or eight or nine deep on the offensive line.”