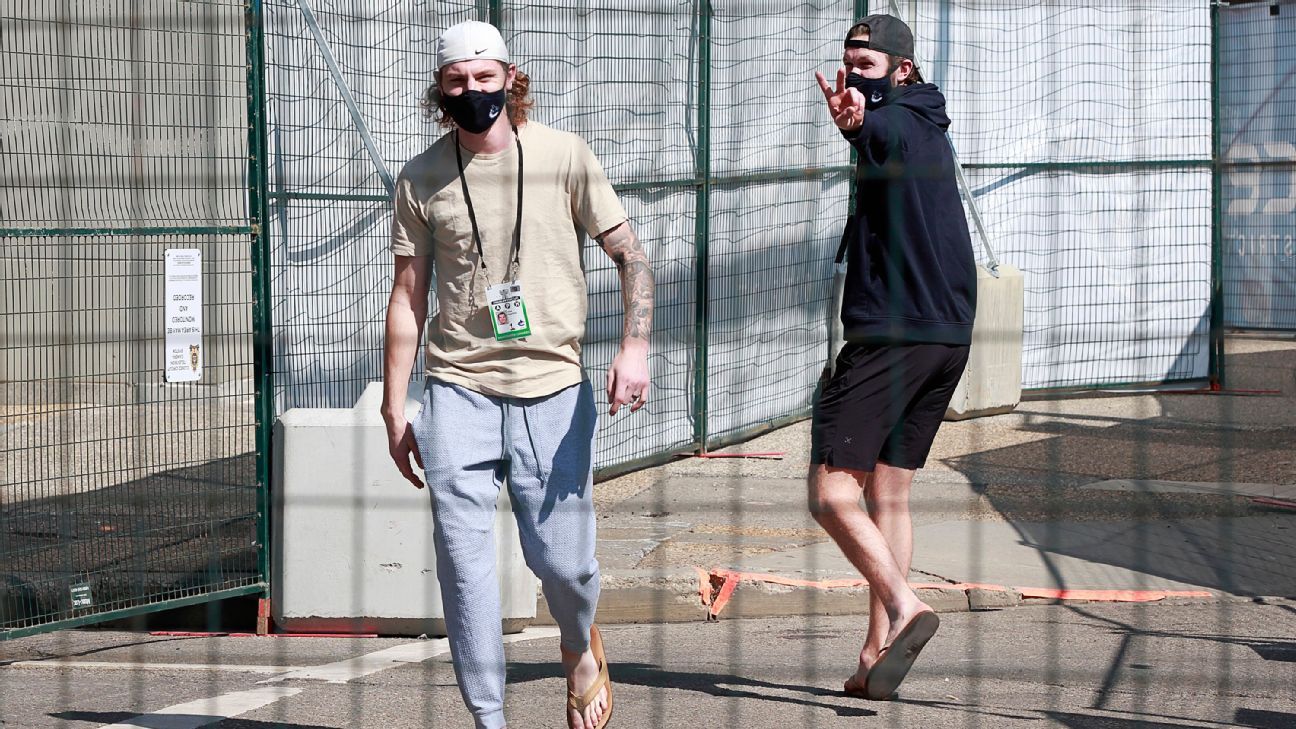 Every week, we’ll provide a handy recap and accompaniment to the latest episode of “Quest For The Stanley Cup,” the NHL docu-series about the playoffs, available exclusively in the U.S. on ESPN+. The first episode for the 2020 playoffs is titled “Double Bubble.”

Describe this episode in 10 words or less

Philadelphia Flyers coach Alain Vigneault analyzing a play using the bench TV monitors, deciding to challenge an Islanders goal for an offside, losing the challenge and then having the referee explain, in detail, why the challenge was denied. Good “inside hockey” stuff, and what you expect from the series.

From QUEST FOR THE CUP:

Torey Krug gets an on-camera swab to show us the daily routine for the players. pic.twitter.com/2oOcosMKxc

This episode was at its best when it took us deep inside the bubble. Like watching the desolate routine of Tampa Bay Lightning forward Blake Coleman as he ordered a bowl of oatmeal through Plexiglas and ate it at a table for one. But more importantly, the scenes of Torey Krug of the since-eliminated Boston Bruins taking us through the daily testing routine, from the I.D. check all the way through the swab up the nose. Witness his unbridled pride in not sneezing during this test.

Some QUEST FOR THE CUP highlights from Episode 1, now on ESPN+. Like, for example, NHL branded hand sanitizer … in the shape of the NHL logo. Nice work, intern. pic.twitter.com/m3mp1MI5st

NHL-branded hand sanitizer, fashioned into the shape of the NHL logo. Hey, why not?

From QUEST FOR THE CUP:

We’re here for the bubble life travelogue from Flyers buddies Travis Sanheim and Travis Konecny, who took us on a tour of the players’ recreation areas — including the squash courts — and then awkwardly walked past their teammates on the sundeck. The obvious highlight: Being genuinely baffled about the existence, and utility, of a hotel bookcase.

Ryan Reaves. The episode took a turn about 25 minutes in when news of the NBA, MLB, WNBA and MLS opting out of games to protest racial injustice permeated the NHL bubble. Golden Knights forward Reaves talked about his concerns that he might have to go it alone for a hockey-based protest, until he received a text from former teammate Kevin Shattenkirk seeking advice on behalf of Eastern Conference players.

The episode includes bits from those landmark news conferences, including the one led by Reaves as he stood in front of his Western Conference peers. Powerful moments, and the episode does a good job of chronicling them even if it plays a little loose on the details. (Like claiming teams that played after the NBA opt-out had discussed a course of action, when those teamwide conversations didn’t happen until the next day.)

More trash-talking, please. One of the hallmarks of this series is the way it captures the banter between players on the ice, and there just wasn’t enough of it in the first episode. It’s an empty arena. We imagine the mics are picking up everything. While we appreciate some of the moments of candor — who doesn’t love a Barry Trotz F-bomb? — give us the chirps. Or, in the case of Ryan Reaves, the “cluck cluck clucks.”

From QUEST FOR THE STANLEY CUP, in the Colorado Avalanche room: pic.twitter.com/kCNjHc6hIT

The Colorado Avalanche have a sign in their dressing room that reads “THIS IS FUN!” complete with exclamation point. Is this a welcome reminder of the childlike glee that players should embody when chasing their championship dreams, or the absolute last thing you want to see after sulking into the locker room after a playoff loss?