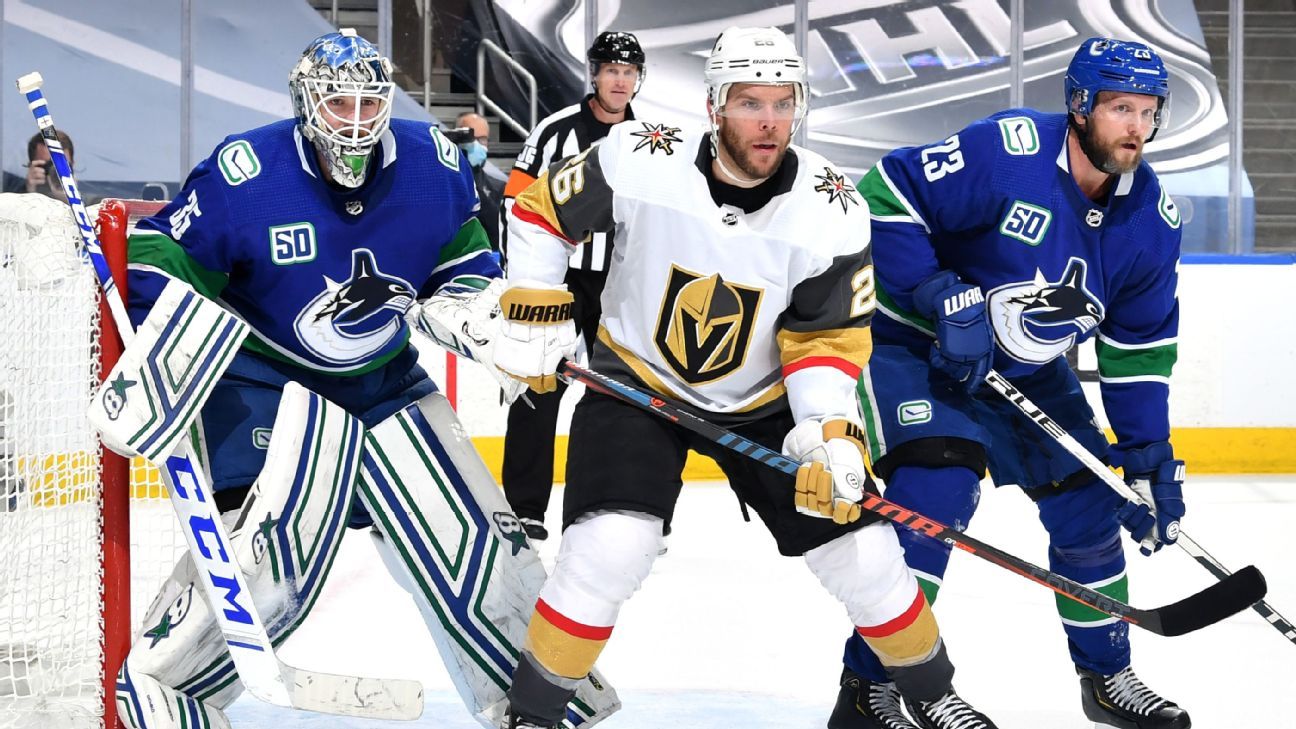 The Vegas Golden Knights overcame their postseason baggage and one of the hottest goaltenders in the playoffs to win Game 7 against Vancouver on Friday night, advancing to the Western Conference Final against the Dallas Stars.

“I need a drink after the last three games before I think about Dallas. We’ll talk tomorrow,” said coach Pete DeBoer, after his team’s 3-0 victory over the Canucks on Friday night. It’s the second time in the three-year existence of the franchise that the Knights are in the conference final.

It almost didn’t happen because of one opponent: Thatcher Demko, the Canucks’ backup goaltender who took over from an “unfit to play” Jacob Markstrom in Game 5 with his team down 3-1 in the series. Demko faced 125 shots in the last three games of the series and stopped 123 of them, with Vegas defenseman Shea Theodore’s goals in Games 5 and 7 the only pucks that got past him.

“That’s as hard an adversity as we can face. That goalie was just unbelievable. It was hard to get one past him,” said Vegas forward Jonathan Marchessault.

Demko made 33 saves in Game 7 after shutting out the Golden Knights in Game 6 just 24 hours earlier. Theodore’s power-play goal at 13:52 of the third period was the game-winner, with empty net goals from Alex Tuch and Paul Stastny padding the score.

“Any time you see a young player have success, you’re proud of them,” said Vancouver coach Travis Green of Demko, the 24-year-old San Diego native. “I’ve been with him for a while and I’m happy for Demko to raise his game to this level.”

Vegas goalie Robin Lehner was brilliant too, saving all 18 shots he faced.

“There was times it felt like we could have played six hours and not scored on them,” said DeBoer. “What he did, and the lightning they could in a bottle in the last three games with him and how he played … what I’m proudest of is how our group stuck with it. When you hit a hot goalie like that, you can fall into the trap of cheating to try and push for more offense. Our belief system in what we were doing, sticking with it, that’s the thing I’m proudest of.”

The mental challenge wasn’t just what Demko was doing in goal; Vegas also had to battle the mental demons from last postseason’s disastrous Game 7 loss to the San Jose Sharks.

The déjà vu was almost too much to process. Last postseason against the Sharks, the Golden Knights blew a 3-1 series lead to force a Game 7. Like against Vancouver, they had the better of the play against the Sharks in Game 7. The turning point in last season’s Game 7 was a major penalty on former Golden Knights center Cody Eakin that led to four power-play goals for the Sharks. Against Vancouver on Friday night, Vegas forward Ryan Reaves took a major penalty for a check to the head of Canucks forward Tyler Motte in the second period.

“Five-minute major, right? Penalty killing in a Game 7?” chuckled DeBoer, who coached that San Jose Sharks team last postseason before being hired by the Knights in January.

But this time, things were different. The Golden Knights killed off their major penalty, and three more Vancouver power-plays in the game.

“You have to think [last postseason] crossed out mind a little bit,” said Marchessault. “We knew this year that no matter what adversity that we faced that right off the bat it was our game. It was just a matter of time. Sticking to the process. Every team we face there’s going to be adversity: a hot goalie or a five-minute major or something like that.”

The Golden Knights faced adversity and overcame it. “We didn’t have any passengers tonight. We had 20 guys out there committed to advance,” said DeBoer.

The Knights and Stars open their conference final on Sunday in Edmonton.