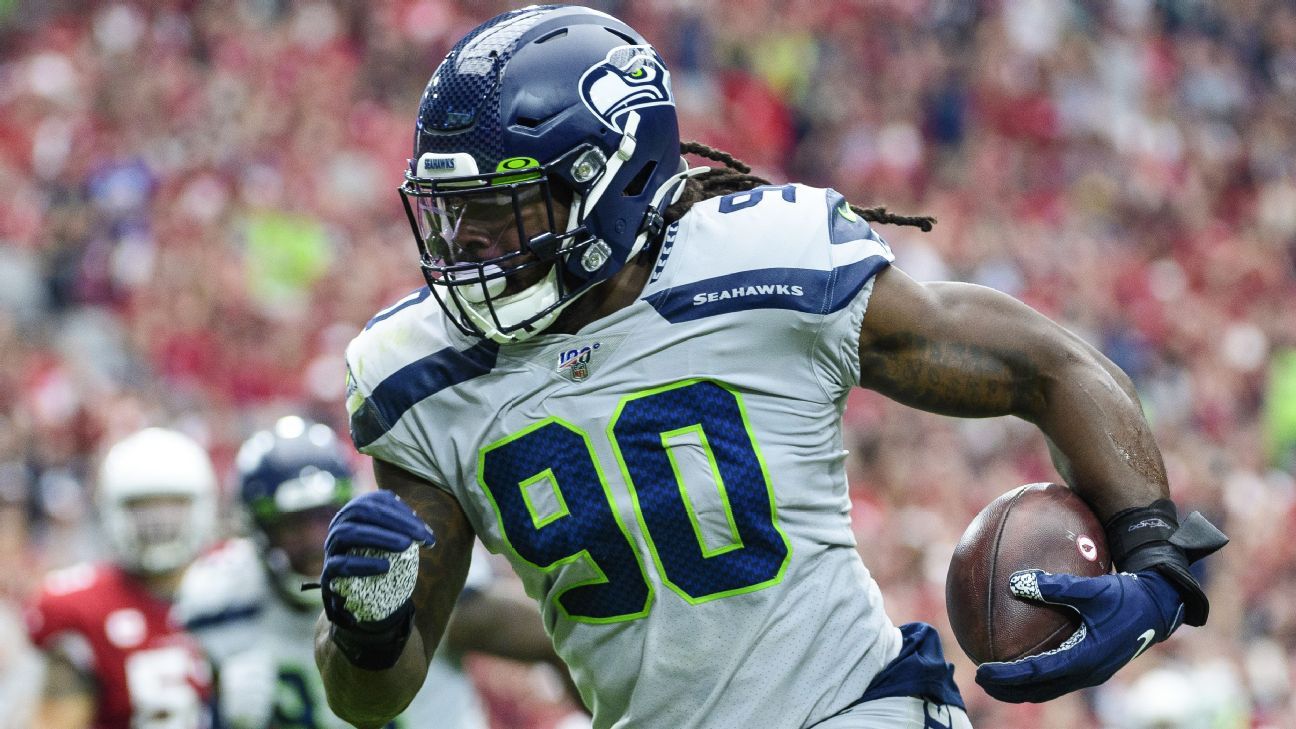 Clowney would reunite with Titans head coach Mike Vrabel, who served as his position coach and defensive coordinator when the two were with the Houston Texans.

The seventh-year veteran had his best season in 2017, when he played in Vrabel’s scheme for the Texans. Clowney posted career highs in sacks (9.5), tackles for a loss (21), and QB hits (21) that season.

The Saints, the other main suitor, made a very strong case for Clowney, as well, sources say.

Clowney made an impact following his trade to the Seattle Seahawks by the Houston Texans before the 2019 season in exchange for Jacob Martin, Barkevious Mingo and a 2020 third-round pick.

While he had only three sacks in 13 regular-season games, Clowney ranked fifth in ESPN’s Pass Rush Win Rate at 24.8%, scored two defensive touchdowns and was consistently Seattle’s most disruptive defensive lineman. PRWR measures how frequently a defender beats his blocker in 2.5 seconds or quicker.

Clowney, who turned 27 in February, suffered a core muscle injury in Week 10 last season and elected to postpone surgery until the offseason. That left him playing in pain for most of the second half of the season. The injury sidelined him for two games; he missed a third game with the flu.

He then added 1.5 sacks in Seattle’s two playoff games. His helmet-to-helmet hit on Carson Wentz — which didn’t draw a penalty or a fine — knocked the Philadelphia Eagles‘ quarterback out of the game in Seattle’s wild-card win.

The Seahawks couldn’t keep him from hitting the open market via either the franchise tag or transition tag, as they agreed not to tag Clowney when they acquired him. Clowney had been tagged by the Texans and possessed the leverage to insist on no 2020 tag because he had yet to sign his tender.

Clowney was named to three consecutive Pro Bowls from 2016 to ’18 with the Texans. Overall, he has 236 tackles, 32 sacks, 9 forced fumbles, 7 recoveries, 51 tackles for loss, an interception and 4 defensive touchdowns since being selected with the first-overall pick in the 2014 draft.

Clowney struggled with knee injuries early in his career, missing 15 games in his first two seasons. In 2016, he played through wrist and elbow injuries, appearing in 14 games and making the Pro Bowl for the first time. In 2017, he played in all 16 games for the only time in his career.

ESPN’s Brady Henderson and Turron Davenport contributed to this report.