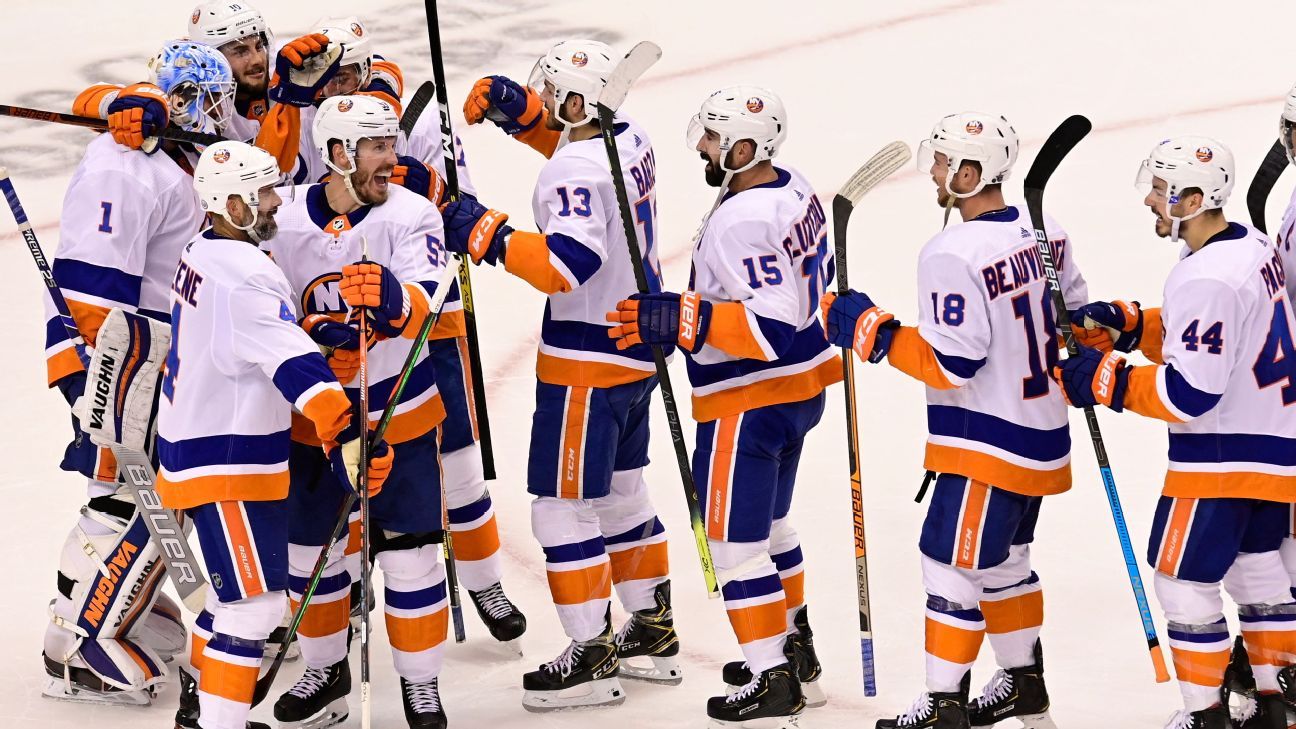 The New York Islanders are going to the Eastern Conference finals for the first time in 27 years, snapping the NHL’s longest streak without a final four appearance.

The Isles put on a clinic against the Philadelphia Flyers in Game 7 on Saturday, scoring two first-period goals en route to a 4-0 win. Backup goalie Thomas Greiss — whom coach Barry Trotz gave the start to give the Isles “freshness” — recorded the shutout, but he only needed to make 16 saves.

“This is a big day and a big win for us,” said New York forward Brock Nelson, who has been with the team since 2013. “Guys have worked their whole life to get this opportunity and get this far. The fan base is passionate and always talks about the wins back in the ’80s and the teams and the Cups. … Those guys are heroes. Everyone in the room now is trying to be a part of this story like that and write our own little chapter.”

The Isles have been through a lot since they lost to the Montreal Canadiens in the 1993 conference finals — including arena sagas, ownership drama (a con man, John Spano, briefly owned the team in 1996) and New York’s captain, John Tavares, leaving in free agency.

Hall of Fame general manager Lou Lamoriello, who won three Stanley Cups with the New Jersey Devils, was hired in May 2018 after a stint with the Toronto Maple Leafs. Trotz joined not long after, just weeks after winning a Stanley Cup with the Washington Capitals, because he got into a contract dispute with the Caps’ management.

“With everyone that came in, the level was raised a bit more,” Nelson said.

The Isles had built a 3-1 lead in their second-round series but almost squandered it. All three of the Flyers’ wins in this series came in overtime sessions.

Before Saturday’s finale, Trotz said he told his team: “Game 7, it sounds like a scary thing … but go have fun. Have fun and enjoy it because game 7s are rare. I’ve been in the league a long time, and you might only have a handful of them. It’s rare. Do something special for the guys next to you; do it for the families. Play Islanders hockey.”

His team responded with an emphatic win, using its signature stingy defense; with just 10 minutes in regulation left on their season, the Flyers had only mustered 11 shots on goal.

“We were fired up,” Islanders defenseman Andy Greene said. “I’m not gonna lie.”

Greene, the former Devils captain who waived his no-trade clause to be dealt to the Islanders this season, scored two goals in the series, including one on Saturday. Defenseman Scott Mayfield, Anthony Beauvillier and Nelson also scored.

Saturday’s outing marked the last game in the Toronto bubble, as all series now shift to Edmonton, Alberta, for the remainder of the playoffs.

The Islanders will travel on Sunday, then they will face the Tampa Bay Lightning in the Eastern Conference finals, which begin on Monday.

It also represented the end to Philadelphia’s unexpectedly strong season in its first year with Alain Vigneault as coach.

The Flyers were tied with the Boston Bruins for the NHL’s best record from Jan. 8 until the league paused in March, and Philadelphia picked right back up this summer, running the table in round-robin play to earn the No. 1 seed in the East.

They Flyers looked flustered Saturday, however, even with star forward Sean Couturier returning; the center later revealed he was playing with a sprained MCL.

“Right now, it’s very frustrating,” Philadelphia captain Claude Giroux said. “We like our team; we like the pieces we have. Frustration is high right now. We’re going in the right direction, but … it’s one game, we win this game and we’re a conference finalist. We’ve got to learn from this and move forward.”

Philadelphia now faces a challenging offseason. With just under $9 million in projected cap space, according to CapFriendly, the Flyers need to shell out new contracts for a few important restricted free agents, including defensemen Robert Hagg and Philippe Myers, as well as for Nolan Patrick, the No. 2 pick of the 2017 draft who missed the entire season as he managed a migraine disorder.