CINCINNATI — Months before the Cincinnati Bengals made the first selection in April’s NFL draft, all the chatter centered on one person: Joe Burrow.

From the time the Bengals clinched the top draft pick in December to now, the former LSU quarterback and Heisman Trophy winner has dominated conversation as the Bengals try to get over last year’s 2-14 season and continue a rebuild accelerated by Burrow’s selection.

On Aug. 30, Bengals coach Zac Taylor effectively named Burrow the starting quarterback for the Week 1 game against the Los Angeles Chargers. It was hardly a shock considering Burrow took every first-team rep during training camp.

Over the past month, Burrow has been the talk of the team. Here’s what people are saying about him on the verge of his NFL debut.

Burrow’s belief in himself has been referenced often during camp.

Wide receiver Auden Tate: “How he approaches the huddle, how he comes into the huddle, he doesn’t come in like a rookie. He comes in almost like a vet, like he’s been there before.”

Running back Joe Mixon: “To me, to be honest, I think what popped off the most about Joe Burrow is his leadership and how he takes the huddle. He’s a very confident guy. He goes about things so professionally. I think he does a great job leading. He’s stepped in — that’s what we needed — and I believe he will be able to get the job done at a high level.”

Running back Giovani Bernard: “I wasn’t a big college football guy. I didn’t really watch too much, but the word around town was that he was one of those guys that really did a great job of leading his players. He’s doing that exact same thing here. A lot of guys are following his lead.”

Burrow spent the bulk of the offseason working on his on-field communication skills, specifically in the huddle and during the pre-snap cadence at the line of scrimmage. The work appears to be paying off.

Tight end C.J. Uzomah: “He’s an absolute beast. He’s an animal out there. You see college. You see what’s going on, you watch him beat your alma mater [Auburn] and do so in convincing fashion and you’re like, ‘Dang, this sucks,’ but he’s that guy. He’s making all the right reads. He’s getting us in and out of all the right protections and making all the right checks and certain checks I didn’t even know we were allowed to check into. He’s like, ‘Why not? Go out there and do this. Come in here and do this.’ It’s been a lot of fun, honestly.”

Left tackle Jonah Williams: “If he wants to change something about the protection, if we’re saying, ‘What are you comfortable with doing?’ or ‘What responsibilities do you want us to control as O-line and what are you more comfortable with to give you a little bit more confidence when you’re sitting back in the pocket?’ So I think that’s been great. Some guys wouldn’t want to speak up like that. They wouldn’t want to give suggestions to a bunch of veteran O-linemen. But he does it in a way that we all respect it and appreciate his input.”

Left guard Michael Jordan: “I just remember guys like [former teammate] Pat Elflein, [former Ohio State coach Urban] Meyer, constantly yelling at Joe to be more demonstrative when calling the cadence, and now everything is crystal clear. He’s getting our guys on defense to jump offside with hard counts, and I love it.”

Mike Tannenbaum and Ryan Clark discuss their expectations for Joe Burrow in his rookie season with the Bengals.

All of the preseason chatter is great, but Burrow will ultimately be judged by his on-field production and whether he can be the Bengals’ next franchise quarterback. If the preseason is any indicator, Burrow appears to be trending toward a positive rookie year.

Wide receiver Tyler Boyd: “Well, the No. 1 thing for me in getting the correlation with the quarterback is just the timing and how he puts the zip on the ball and how quickly he releases the ball. That’s one for me. Secondly, how hard is he throwing it, so how fast do I have to get my hands up and things like that. So far, he’s been on-point to me.”

Wide receiver A.J. Green: “You have to be smart and you have to be able to pick up this offense very fast. We have a very complex offense, a lot of plays, and Joe is picking it up like it’s nothing.” 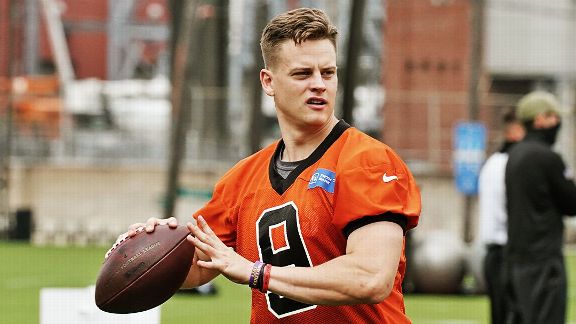 • Burrow’s NFL education during a pandemic
• How Bengals can make most of Mixon
• Best bets on Bengals, rest of the NFL
• Ceiling and floor for Bengals in 2020

Safety Jessie Bates: “A lot of young quarterbacks, they look at that first progression and if it’s not there, they still throw it. They force balls. Joe, he’s going from the first read to the last read and hitting the backside dig in practice. It’s been pretty impressive.”

Defensive end Sam Hubbard: “He has the same mentality as he was as a third-string backup at Ohio State as a freshman, still fighting every day to get on the field and get his name known. He takes that mentality and levelheadedness of where he’s been to where he’s at now.”

Offensive coordinator Brian Callahan: “We haven’t pulled back one bit and he’s handled everything we’ve thrown at him. It’s been really encouraging and exciting in that regard.”

Bengals coach Zac Taylor: “You don’t want to compare him to anybody else because you just see the work that he puts in individually. And it’s not this false confidence that he walks around with. We see the work. I’m sure he’s doing it when we’re not around, because he shows up the next day and he asks questions and he’s on top of it.”