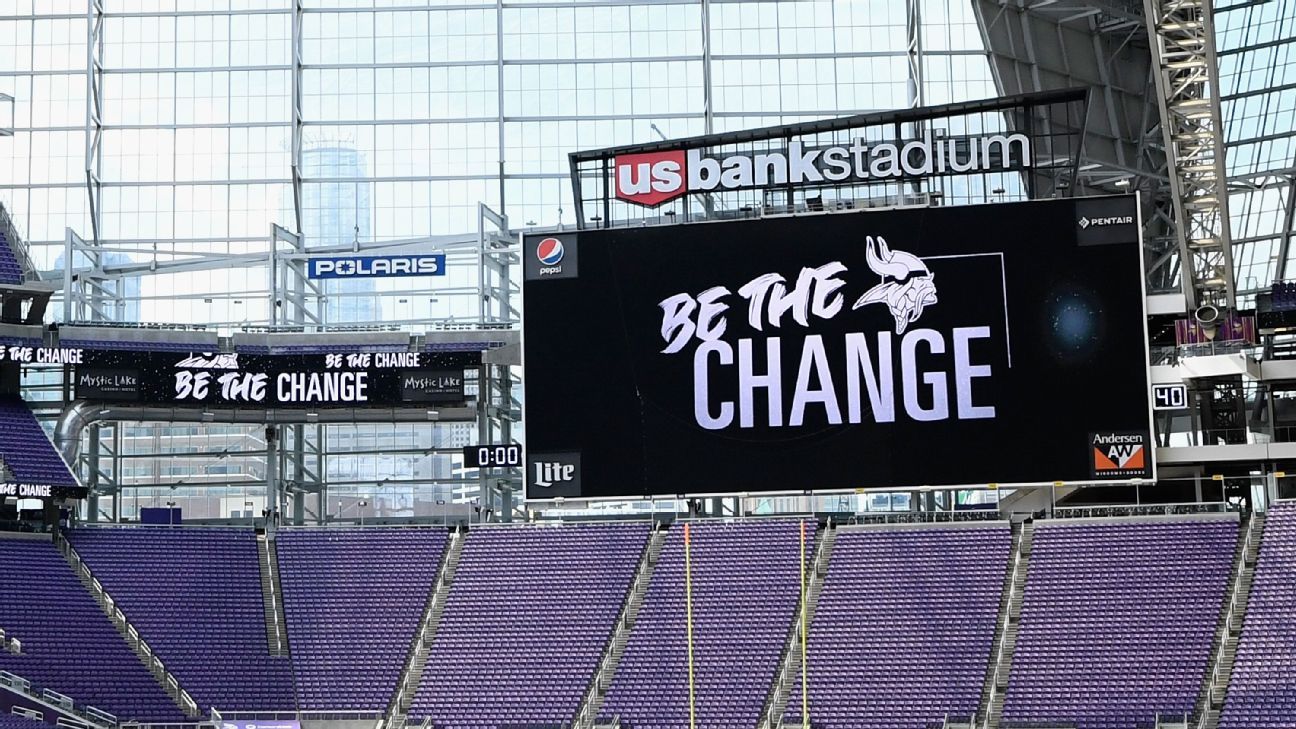 The Vikings created the George Floyd Legacy Scholarship with a $125,000 endowment to benefit Black graduating seniors in the Minneapolis-St. Paul area. Mimi Kol-Balfour, the inaugural recipient, was awarded the scholarship last week in a meeting with Vikings co-owner/team president Mark Wilf, general manager Rick Spielman and members of the social justice committee. Kol-Balfour, a graduate of Southwest High School in Minneapolis, begins online classes at Barnard College on Tuesday and will explore a blended economics/political science degree with a minor in African studies.

“We want to have an impact and some hope that we’re on the road toward a better future,” Wilf said. “What better way could you have it than giving a scholarship to someone? We need our young people. They’re going to be part of developing a better future and education is always the key; to turn what happened to George Floyd and all the other tragedies towards a positive where we can support the education of young people.”

Kol-Balfour submitted an essay detailing a plan to fight injustices in her community where she discussed her research on the discrepancies of marginalized groups. Her primary area of focus was on voter ethics and the micro-issues that impact voter participation and access.

That’s a cause being championed by the Vikings’ social justice committee. Together with the Minnesota Secretary of State’s office and Rock the Vote, the Vikings are using their platform to encourage fan voter registration (with a separate goal of having 100% of the organization registered to vote in the November election), are donating $20,000 in personal protective equipment for local polling workers and have launched a PSA campaign called “Be The Change,” focused on voter education.

“It’s not necessarily to persuade anyone to vote a certain way, it’s just to be active in your community,” linebacker Eric Kendricks said. “This is a small step we can all take to take action and sometimes we just give up that right. It’s important that we understand that we’ve got to be involved in the process, especially if we’re going to make a change, it’s important that we take action in the process and things that we can get done in order for us to have an opinion on things.”

The Vikings also offered U.S. Bank Stadium to the Secretary of State’s office as a polling location for the November election, but local polling places had already been set for this cycle, according to Wilf.

Running back Alexander Mattison is a front-facing figure in the Vikings’ campaign. Using his personal experiences, Mattison puts a focus on local elections and seeing change in one’s direct community.

“I was at a point in my life where I felt that my vote, my voice didn’t really matter or didn’t make as much of a difference,” Mattison said. “I think it’s important for us to stress the issue and let people know that change starts with you and we all have to be able to open ourselves up to accept that our voices do matter, our opinions and our votes do matter.

“We want to directly impact something that’s right here, next door, in the backyard rather than looking at something that’s a big, big picture. We know that the bigger picture has smaller details. We’re just trying to be a part of being the change in those details.”

Other areas of focus for the social justice committee’s funds are expanding statewide educational curriculum on racism and Black history and law enforcement and criminal justice reform.

The Vikings will further their commitment to AllSquare, a local nonprofit that invests in professional development of formerly incarcerated individuals; host a series of conversations with Minnesota high school athletic programs to address issues of race and injustice; continue their involvement with the Hennepin and Ramsey County Juvenile Detention Centers with weekly virtual meetings; and focus efforts into the integration of Black history into mainstream U.S. history and courses devoted to the African American experience.

“I think a lot of times our history just starts at slavery or starts at Jim Crow and it’s very dark,” running back Ameer Abdullah said. “The African American history is very dark up until the ’60s if we’re being honest. But there’s definitely crevasses of life that shine bright between the emancipation up until now that aren’t typically taught in the curriculum in our standard education here in America that I think are important lessons.”

The team will also continue its partnership with Project Success, a Minneapolis-based organization focused on helping kids develop life skills, support and confidence so they are more successful and engaged during high school and more prepared for life after graduation.

Minnesota partnered with Project Success in 2019 to take 50 students of color from Minneapolis to Washington, D.C., for a special experience that included a visit to the National Museum of African American History & Culture. The trip will be conducted virtually this fall.