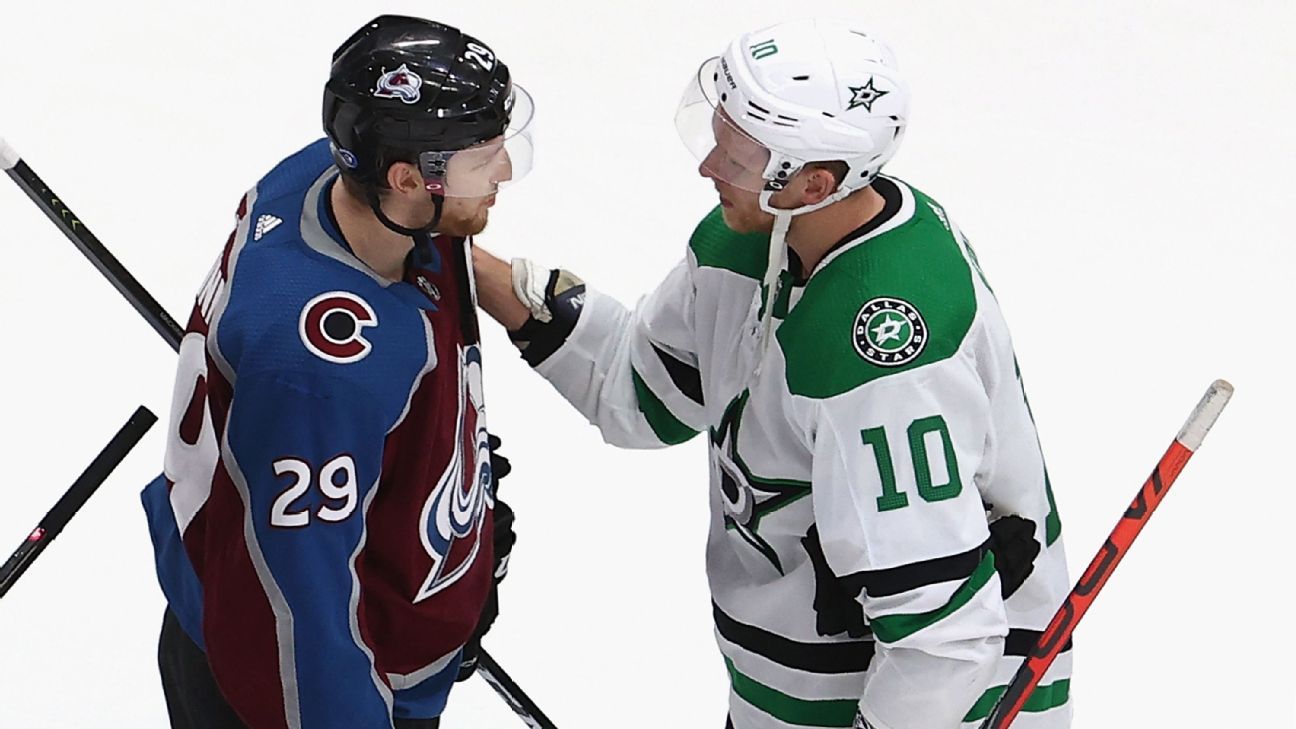 Every week, we’ll provide a handy recap and accompaniment to the latest episode of “Quest For The Stanley Cup,” the NHL docuseries about the playoffs, available exclusively in the U.S. on ESPN+. The second episode for the 2020 playoffs is titled “Sevens are Wild.”

Describe this episode in 10 words or less.

Colorado, Philadelphia, Vancouver, Boston: Your bubbles have been popped.

This was focused in on Dallas Stars coach Rick Bowness after their overtime Game 7 win over the Colorado Avalanche. After Joel Kiviranta completed his hat trick to win the game, Bowness celebrated on the ice by bellowing, “The Finns, baby! The f—ing Finns!” Then in the handshake line, Nathan MacKinnon of the Avalanche told the 65-year-old coach “we’re all cheering for you back home, eh?” It was a message from one of Nova Scotia’s greatest players to a member of the Nova Scotia Sport Hall of Fame.

The new episode of QUEST FOR THE STANLEY CUP has dropped on ESPN+ and it’s terrific. And by that I mean @TBLightning coach Jon Cooper is in a kayak. #NHL

The episode’s first off-ice segment featured the Tampa Bay Lightning getting in some post-series recreation in the Toronto bubble. Patrick Maroon attempted to fish in a harbor, and ended up hitting a camera operator with his hook. Coach Jon Cooper, seen here looking casual in a kayak, said he appreciated being out of the hotel but added, “I did find it odd that they gave us fishing gear for a lagoon that has no fish.”

In the Edmonton bubble, we got a glimpse at the barber services available to the players. The “weekly trim true” was set up in the concourse of the arena, and players got a snip from “Craig Bowa, a respected Edmonton hair professional” (as if there’s any other kind). It was interesting to see the COVID-19 protocols for the haircut, as the barber was basically wearing a hazmat suit.

Referee Steve Kozari called Alexander Radulov of the Stars for a high stick in Game 7 against the Avalanche. As Radulov protested the call near the penalty box, Kozari said: “Get in there and sit down. I’ll talk to you. Sit down. Raddy, I love you like a brother, buddy. But I had to call it.” Is there a Lady Byng for referees?

The @Stars mantra, uttered by both Jamie Benn and Joel Kiviranta after the game. pic.twitter.com/8rD7LkAzdW

“We’re not going home!” One of the most interesting bits in the episode was seeing captain Jamie Benn of the Stars behind the scenes, where was a lot more animated than he usually is in front of the cameras. “We’re not going home boys! We’re not going home!” he exclaimed as he read the lineup for Game 7. Later you realize that’s also the mantra uttered by Kiviranta after getting player of the game honors in the dressing room.

Ryan Reaves of the Vegas Golden Knights was our MVP for Episode 1 of “Quest for the Stanley Cup,” but in Game 7 against the Vancouver Canucks he was ejected after a hit to the head of Tyler Motte. We not only get to see Reaves nervously watching to see whether his team can pull out the win, but also get a glimpse of him going to his hearing with the NHL Department of Player Safety the next day. (He was suspended for Game 1 of the Western Conference finals.)

Lots of Oskar Lindblom coverage in this QUEST FOR THE STANLEY CUP episode pic.twitter.com/0fgX8j3WpW

Episode 2 will be remembered for its coverage of three thrilling Game 7s, but also for the emotional return of Oskar Lindblom to the Philadelphia Flyers‘ lineup since being diagnosed with and treated for Ewing’s sarcoma. That included an on-ice view of the stick-tapping salute the Islanders and Flyers gave him when he hit the ice in Game 6, and the scene in the Flyers’ dressing room when he was given a metallic helmet as their player of the game. Lindblom hadn’t played a game in 271 days.

We’re getting coaches cursing. We’re getting conversations with referees. But we’re still not getting those classic moments of player-on-player trash talking and mockery that used to define this series. Where’s Matt Martin of the Leafs telling Drew Miller of the Red Wings to “go dye your hair”? Or Brad Richards telling the Flyers’ Tom Sestito that his stint in the NHL was “fantasy camp”? We refuse to believe the bubbles are this tidy.

Any lingering questions after watching?

Was Shayne Gostisbehere the best socially distanced reporter in the bubble?