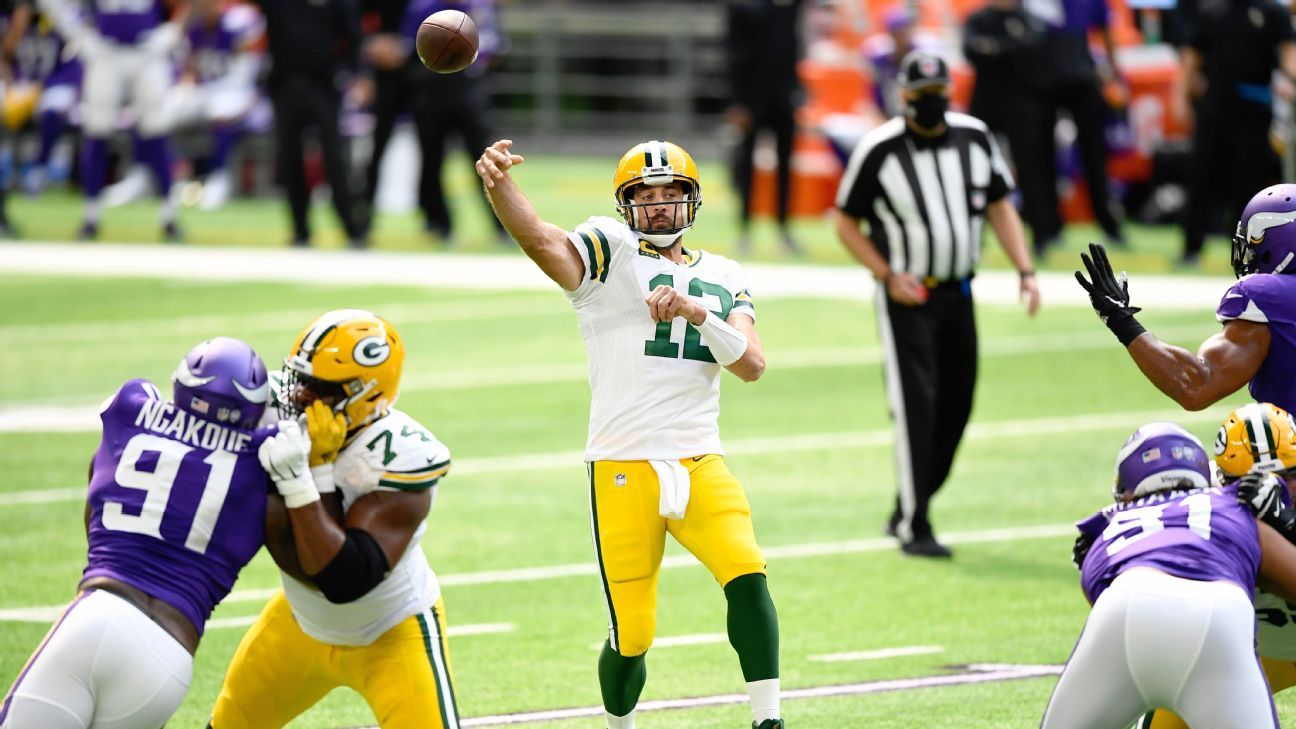 Who said Aaron Rodgers needed more weapons for the Green Bay Packers to be successful?

He sure didn’t in the Packers’ season-opening 43-34 win over the Minnesota Vikings at a fan-less U.S. Bank Stadium. Rodgers seemed as happy as ever heading into his 16th NFL season despite the fact that the team drafted his possible eventual successor, Jordan Love, in the first round instead of adding a playmaking weapon. And he relied on an old favorite and a couple of young receivers he talked up this summer.

The result was the first four-touchdown-pass game in a season opener for a Packers quarterback since Brett Favre in 1999. Rodgers threw two to Pro Bowl receiver Davante Adams and one each to up-and-comers Marquez Valdes-Scantling and Allen Lazard — the two other starters who benefited from Packers general manager Brian Gutekunst’s decision to ignore the position in the draft even though most outsiders viewed it as the team’s biggest weakness.

It was Rodgers’ most touchdown passes to receivers in a game since Week 4 of the 2017 season. He finished 32-of-44 for 364 yards without an interception, and the Packers scored their most points ever in a season opener.

Rodgers targeted Adams, last year’s receiving leader, time after time, feeding him nine times for 103 yards and a touchdown in the first half alone. Forget that Adams dropped a touchdown on a failed fourth-and-1 play on one of three failed red zone trips early in the game. Adams caught touchdowns of 24 yards in the second quarter and 1 yard in the third on the way to 14 catches for 156 yards.

Rodgers and Valdes-Scantling connected on a 45-yard bomb just days after the quarterback heaped praise on the third-year receiver.

“I would say that the receiver that I’ve been most impressed with, especially the last week, 10 days of camp is Marquez,” Rodgers said leading into the regular season. However, in a stretch that exemplified Valdes-Scantling’s maddening inconsistency, he dropped two balls in the third quarter — one on third down that would’ve extended a drive and another that might have gone for a 61-yard touchdown on a perfectly thrown deep ball — before hauling in a 39-yard pass on a free play.

Rodgers also showed off his mastery at the line of scrimmage once again, drawing three neutral-zone infractions or defensive offside penalties Sunday. That’s tied for his most in a game over the past eight seasons, according to ESPN Stats & Information. One of them he turned into the 39-yard completion to Valdes-Scantling in the third quarter.

Keep in mind, Rodgers did this as the road quarterback, albeit in a stadium without fans. Rodgers’ four touchdown passes moved him past Eli Manning and into seventh place on the all-time list with 368. Last year’s touchdown machine, Aaron Jones, scored his first one of the season. He’ll need 18 more to match last year’s NFL co-leading total.

It also was the Packers’ seventh straight NFC North win after they ran the table (6-0) in division games last year on the way to their 13-3 regular season. It’s their longest division-winning streak since the 2012 season, when they ran their streak to 12 straight.

With Love watching as the inactive third quarterback, neither the Packers’ injuries nor their lack of additions at receiver was an issue on Sunday.