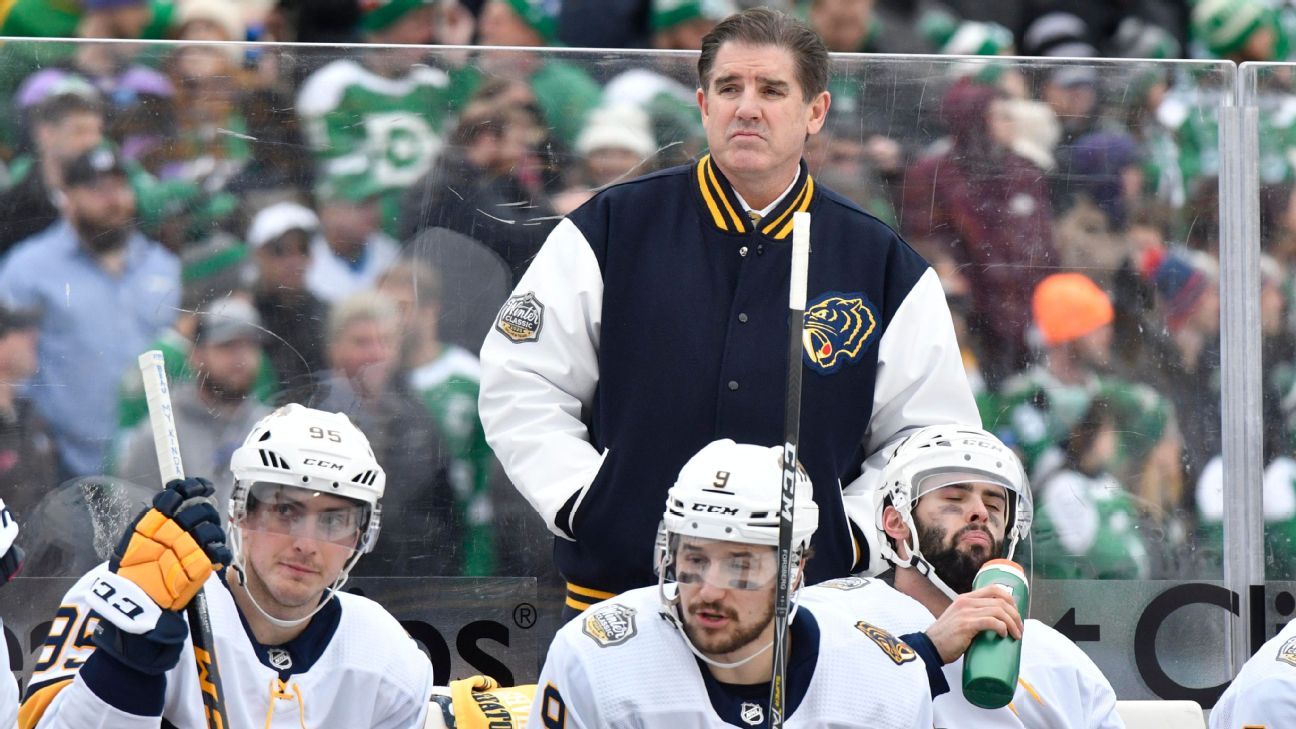 Peter Laviolette has been named the new coach of the Washington Capitals, the team announced Tuesday.

Laviolette’s deal is believed to be for three years, a source told ESPN.

Laviolette, 55, has 18 years of experience as a head coach and ranks 16th in all-time wins with a career record of 637-425-123. Laviolette won a Stanley Cup with the Hurricanes in 2006 and most recently coached the Predators, but was fired in January after five and a half seasons with the team. Laviolette also led the 2010 Flyers and 2017 Predators to the Stanley Cup Final.

“We feel he is a great communicator who will motivate our players to play with passion, structure and discipline, while helping our young players reach their potential,” Capitals GM Brian MacLellan said in a statement. “In addition, he is a high-character individual who is highly respected for his coaching pedigree, all of which make him the ideal person to lead our team to compete for the Stanley Cup.”

“I’m thankful and excited for the opportunity to lead this hockey club,” Laviolette said in the statement. “This is a winning organization with high expectations. I look forward to coaching this tremendous group of players and bringing my experience and vision to the team.”

Laviolette is still under contract with the Predators for next season, making $2.5 million, but the Capitals are expected to cover that salary as part of the deal.

Laviolette replaces Todd Reirden, who was fired three days after Washington was eliminated from the playoffs this summer. The Capitals hired Reirden, one of their top assistants, after getting into a contract dispute with coach Barry Trotz shortly after winning the Stanley Cup in 2018. However, the Capitals were knocked out in the first round in Reirden’s first two seasons, including a five-game loss to Trotz’s Islanders this summer.

Reirden has since been hired as an assistant coach in Pittsburgh.

MacLellan was clear that the top criteria he was looking for in a new coach was experience. Mike Babcock and Gerard Gallant were Washington’s two other finalists, according to sources. Trotz was the only one of six coaches in the Alex Ovechkin era with previous head-coaching experience. The other five were rookies.

MacLellan said last month that he began noticing a regression in his team in late December.

“You could see the style of play start to deteriorate,” MacLellan told reporters in August. “I think we had a good culture here, and it’s starting to slip. I think we need to grab a hold of it, get it back to where it was. We’ve developed a habit of thinking that we can play good when we have to play good, rather than developing good habits and the games will take care of themselves.”

The Capitals face another offseason in which they are strapped by the salary cap, which is expected to stay flat at $81.5 million. Goalie Braden Holtby, who won the Cup in 2018, is an unrestricted free agent and could walk as the team turns to 23-year-old Ilya Samsonov in net. Ovechkin, meanwhile, is set to become a free agent in 2021.