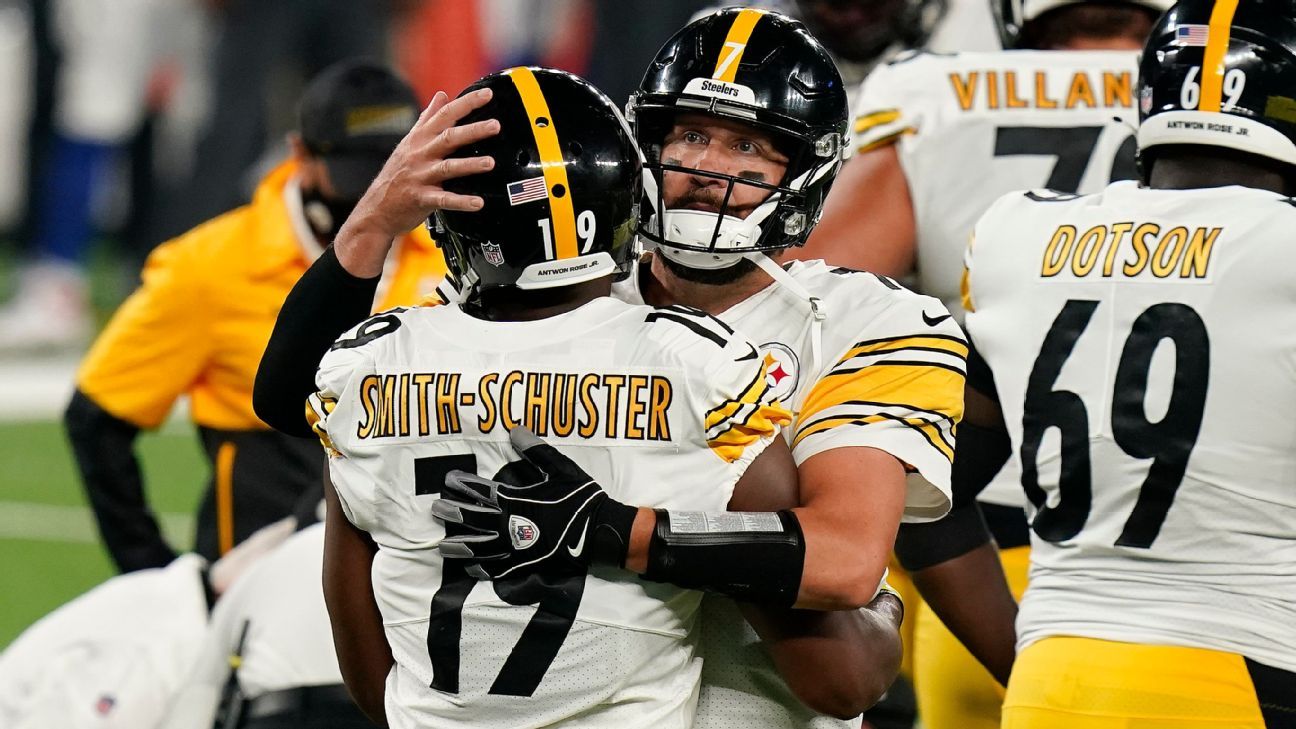 If Ben Roethlisberger had any jitters Monday night, the veteran shook them off in time for a vintage performance in the Pittsburgh Steelers‘ 26-16 victory against the New York Giants.

Playing for the first time in a year since a season-ending elbow injury sustained in Week 2 of 2019, Roethlisberger completed 21 of 32 passes for 229 yards and three touchdowns — and an 11-yard keeper for a first down.

“There obviously were a little bit of jitters, I was excited and nervous to be out there,” Roethlisberger said. “I just wanted to not let my guys down, that was the biggest thing.”

Roethlisberger looked most like his old self in an abbreviated two-minute drill just before halftime, leading the Steelers on an eight-play, 78-yard drive capped with touchdown throw to James Washington where the third-year wide receiver muscled his way into the end zone for the score.

Just before that drive, Roethlisberger stood on the sideline between drives with a jacket transformed into a wrap for his surgically repaired elbow to keep him loose and warm.

Roethlisberger admitted afterward he might feel some pain Tuesday following the game, but that there was nothing serious wrong with his knee, which he briefly grabbed after his 11-yard run in the second-quarter, or his elbow.

“I probably just grabbed my knee because I was moving so fast, but I feel great right now,” Roethlisberger said. “Obviously, adrenaline still pumping and we won the game. I’m going to be sore tomorrow and might have some bumps and bruises but in terms of elbow and everything else I feel really good right now.”

With his third scoring pass of the night — and second to Smith-Schuster — Roethlisberger notched his 366th career touchdown, setting a franchise record and tying Eli Manning for eighth-most in NFL history.

“I am just so excited, I am just thankful,” Roethlisberger told ESPN’s Maria Taylor in his postgame interview. “I told the guys in the locker room before the game that I’m back because of them. I don’t need to accomplish anything personally anymore. It’s about being with a defense that I think is as good as any I have ever played with, skill guys that are young and fun to play with and then, of course my line, who I love to death and they love me.

“They are the reason I came back to play.”

It wasn’t the most auspicious start for Roethlisberger, 38, when he threw a lateral to running back James Conner under pressure for no gain, ending his first series back after three plays. But Roethlisberger slowly got into a rhythm, finding Smith-Schuster for an 11-yard gain on the next series. That gave the quarterback and his offense a little life as he went on to connect with rookie Chase Claypool on a 28-yard toe-tapping reception to convert a third-and-long. The Steelers had to settle for a field goal on that drive, but a quarter later, Roethlisberger found the end zone when he hit Smith-Schuster for a 10-yard touchdown, capitalizing on T.J. Watt‘s interception of Daniel Jones in Giants territory.

“They’re unbelievable,” Roethlisberger said of his defense. “Unfortunately, I have to face it every day in practice, they are one of the best defenses I’ve played with, and I’ve played with some really good ones. I’m excited to be on the football field with them, and what they do is as a quarterback they allow me to play more free, because if you do make a mistake you can count on them to bail you out a bit.. they did it tonight, creating turnovers, big stops.”

After a scoreless third quarter, Roethlisberger got his team on the board yet again with a field goal drive followed by a time-consuming 11-play, 75-yard drive finished with Smith-Schuster’s second touchdown to seal the victory in his return.

“I’m excited we won the game, I’ll tell you that,” Roethlisberger said. “It’s not about me individually, the reason I came for is for these guys and this team. It’s a special group of football players and men, and I’m just thankful to be a part of it.”

The veteran quarterback did it with a new-look offensive line, including an entirely different right side than the one he previously played behind. Zach Banner won the right tackle job out of training camp, while Stefen Wisniewski replaced the injured David DeCastro at right guard. But both left late in the fourth quarter, with a knee injury and pectoral injury, respectively.

The Steelers also finished the game without Conner, who suffered a sprained ankle that will be examined Tuesday, a source told ESPN’s Adam Schefter. Pittsburgh is, in the words of the source, “optimistic for a timely return.”

“We had a number of guys who got injured in the game and are being evaluated,” coach Mike Tomlin said afterward. “Zach Banner went down with a knee late he is being evaluated right now, Wisnewski had a pec, James Conner had an ankle and I don’t know what the status of all of those guys are. Obviously, we are working on a short week so we better be ready to close ranks.”