Lincoln Riley could barely believe it.

A budding offensive coordinator at East Carolina at the time, Riley had just unsuccessfully tried convincing Baker Mayfield to transfer to East Carolina from Texas Tech. Mayfield had walked on at Oklahoma instead. But Riley saw a similar opportunity in this other overlooked quarterback.

Following his junior season of high school in 2013, Joe Burrow had only one college scholarship offer. He didn’t consider it real, either, since it came from Ohio University, where his father, Jimmy, was defensive coordinator.

“I remember watching the film and thinking the guy had an outstanding skill set,” Riley told ESPN. “Surprised at the time that he wasn’t being recruited a little bit more heavily by the more normally prominent programs.”

Not long after Riley offered Burrow his second scholarship, the prominent programs came calling, including Ohio State, which ultimately landed his commitment a couple of months later. The following year in 2015, Riley joined Mayfield at Oklahoma, first as offensive coordinator, then two seasons later as his head coach.

Beginning with Riley’s clairvoyant interest, Burrow and Mayfield followed strikingly comparable career paths, defined by swagger and self-confidence. They both transferred, led their respective schools to the College Football Playoff, won the Heisman Trophy and were No. 1 overall NFL draft picks. Upon arrival at their respective losing franchises in Ohio, they were immediately anointed as football saviors.

In a Thursday night matchup, which pits Burrow’s Cincinnati Bengals against Mayfield’s Cleveland Browns (8:20 p.m. ET, NFL Network), the two quarterbacks face off in a reinvigorated in-state rivalry. Both look to position perennial losing teams as the primary challenger to the Baltimore Ravens‘ and Pittsburgh Steelers‘ long-held dominion over the AFC North.

“They both had a ton of success at the college level,” Riley said. “Two high-quality players who are going to be two strong leaders for those organizations.”

In recent decades, the Battle of Ohio has featured two of the NFL’s most woeful franchises. The Browns haven’t reached the playoffs in 18 years and the Bengals have not won a postseason game since 1991. Both respective droughts are the longest of their kind in the league.

To change those fortunes, both franchises are banking their young quarterbacks will find their way.

ESPN analyst and former NFL quarterback Dan Orlovsky said he has high expectations for both QBs. And while Burrow and Mayfield are both exciting players who are accurate passers, Orlovsky said, the way each player approaches the game is vastly different.

“Joe is a way more instinctual and reactionary player. Baker’s a much more in-structure player,” Orlovsky said. “I think Joe sees the field outside-in, where Baker sees the field inside-out.”

After a breakout rookie season in 2018, Mayfield surprisingly struggled during Cleveland’s disappointing 6-10 finish last season. The pressure on him and the Browns was only amplified after Mayfield tossed an interception on the Browns’ first drive on the way to a 38-6 season-opening shellacking by Baltimore on Sunday.

Burrow, meanwhile, nearly led Cincinnati on a game-winning drive against the Los Angeles Chargers in his NFL debut on Sunday. A 3-yard touchdown pass to A.J. Green was nullified by offensive pass interference. On the next play, Cincinnati’s Randy Bullock missed a game-tying 31-yard field goal with 2 seconds left after injuring his calf, and the Chargers escaped with a 16-13 victory.

Mayfield didn’t see Burrow’s first NFL appearance, but was impressed watching several of his games at LSU. Mayfield said he likes Burrow’s demeanor as a field general, his decisiveness and quickness in getting the ball out of his hand and giving his receivers a chance to make plays.

“Obviously, I think he’s an unbelievably talented guy,” Mayfield said. “But I think his teammates love him and they really fight for him. That is what you can tell on TV.”

The respect between the quarterbacks is mutual. Burrow got a firsthand look at Mayfield’s skills when Oklahoma traveled to Columbus in 2017 and beat Ohio State 31-16 in a showdown of top-five teams as Burrow watched from the bench in his final year with the Buckeyes. After the game, with Burrow in the locker room with the rest of his teammates, Mayfield planted a crimson Sooners flag at midfield.

“I think he’s a great player,” Burrow said. “Obviously what he did at Oklahoma and what he did in his first couple of years in the NFL, he’s been playing really well. I’m excited to compete against him.”

Mayfield serves as a template and, potentially, a cautionary tale for the Bengals rookie. Mayfield holds the NFL rookie record with 27 touchdown passes set in 2018. But as 2019 showed, linear success for NFL quarterbacks is not always guaranteed.

After a loss in his debut, Burrow noted that he’s more concerned about winning than chasing Mayfield’s rookie record.

First-year Browns coach Kevin Stefanski said the self-belief Mayfield and Burrow each possesses is a crucial quality, especially when authentic. Stefanski added that genuine inner confidence is more important to teammates than a false sense of bravado. Bengals coach Zac Taylor said he sees that trait in both quarterbacks as well.

“It’s some guys just have that natural [demeanor] and tangibles that guys gravitate to and they don’t have to try to be somebody they’re not — they just naturally have it,” said Taylor, who, as a native of Norman, Oklahoma, has followed Mayfield’s career over the years. “You see that with Baker. You see that with Joe. When you got one like that, it’s pretty special.”

Players on both sides of Thursday’s game said they know how special Mayfield and Burrow can be as teammates. That includes Bengals running back Joe Mixon, who starred with Mayfield at Oklahoma, and Browns cornerback Denzel Ward, who was in the same Ohio State recruiting class as Burrow.

Browns wide receivers Odell Beckham Jr. and Jarvis Landry became fans of Burrow as he led their alma mater on its historic 2019 run. Beckham was even spotted on the field giving cash to Burrow and other LSU players after the title victory over Clemson. 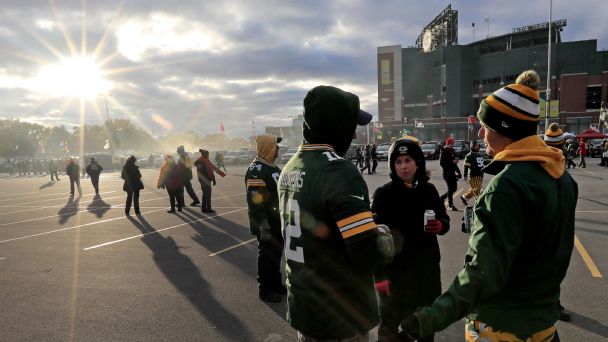 • No tailgating allowed! Lambeau on hold
• Broncos’ Jeudy on how ‘failure is growth’
• Can Giants’ Slayton produce like a No. 1?
• Rams’ Donald a ‘monster’ task for Eagles
• Ranking NFL stadiums 1-28

“Obviously, I don’t want him to beat us,” Beckham said, “but anywhere else or any other game he plays, I’m always rooting for him.”

As Riley and other college coaches continue to deal with the pandemic-plagued season, those in the AFC North will get a look at what Riley has experienced firsthand over the years. Two years after coaching Mayfield in a College Football Playoff, Riley coached against Burrow, who dismantled the Sooners in last season’s playoff semifinal.

Such college success propelled Mayfield and Burrow to their respective NFL teams. And if they can play up to expectations, Thursday’s meeting could be the first of many in the Buckeye State.

“It’s pretty awesome to see what those guys have done,” Riley said. “It should be fun to watch over the next several years.”