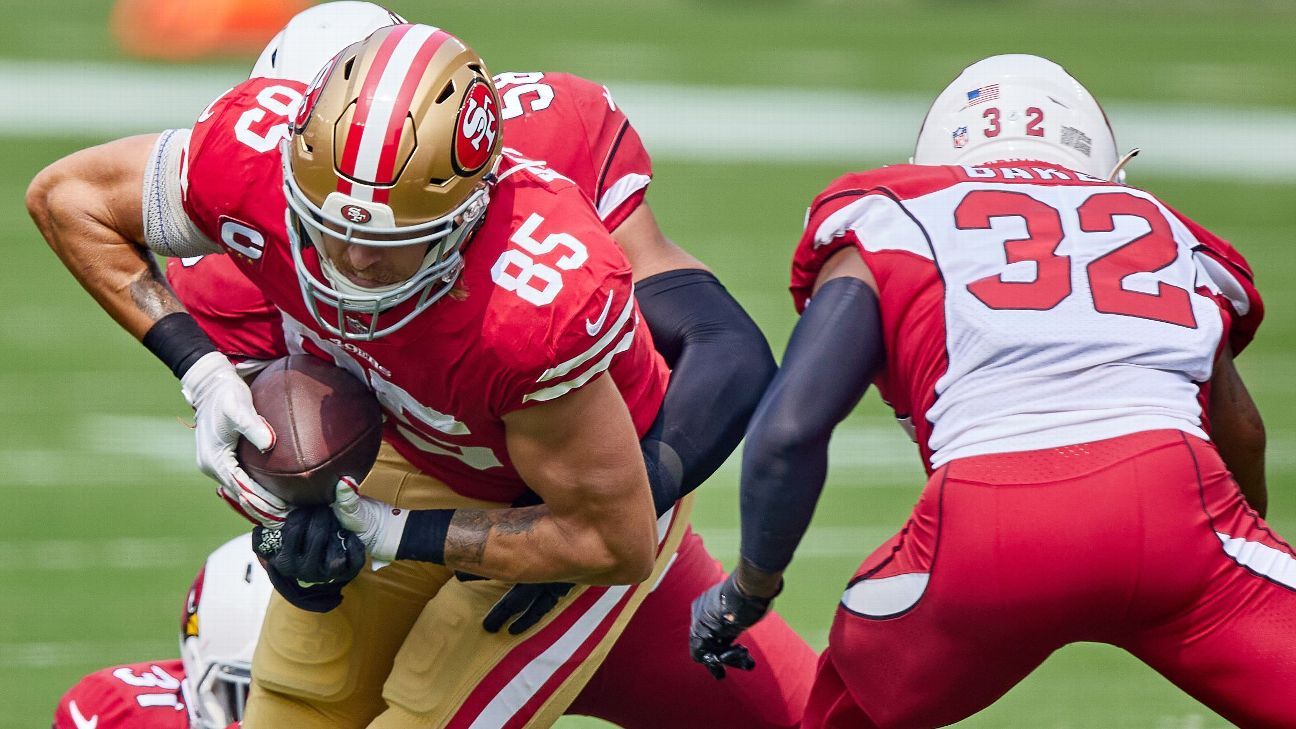 Earlier in the week, Shanahan indicated a decision could be made closer to game time because of Kittle’s propensity for playing through injury. But, after Kittle sat out practice all week and with a cross-country flight set for Friday, the 49ers decided not to risk it and declared Kittle out on Friday’s injury report with a sprained left knee.

Kittle will stay in the Bay Area this weekend to rehab and will rejoin the team at The Greenbrier Resort in Sulphur Springs, West Virginia, next week as it prepares for the Week 3 meeting against the New York Giants.

“I think if it was just the normal person, we would have ruled him out earlier in the week, but we never do that with George because of what he’s shown us here over these three years with him,” Shanahan said. “We would have held out two more days to wait and see if it was a home game, but with us having to travel today we had to decide whether it was worth it to bring him.

Kittle suffered the injury in last week’s loss to the Arizona Cardinals. Just before halftime, Kittle jumped for a high pass from quarterback Jimmy Garoppolo and Cardinals safety Budda Baker hit him simultaneously. Kittle hobbled off the field and to the locker room but returned and played the entire second half, although Garoppolo did not target him again.

The 49ers will turn to reserves Jordan Reed, Ross Dwelley and Charlie Woerner to step in for Kittle.

Meanwhile, the 49ers are hopeful that defensive end Dee Ford will be able to play Sunday despite a neck injury. Ford, who is listed as questionable on the injury report, was a surprise addition to the participation report on Thursday and was again absent on Friday with what Shanahan referred to as neck spasms.

“It’s Friday, so we’re just trying to play it slow here and see how it goes for the next two days,” Shanahan said.

Without Kittle, the Niners could also ask more of their receivers this week as rookie Brandon Aiyuk is expected to debut after missing last week because of a hamstring injury. Veteran wideout Mohamed Sanu could also be an option after officially signing with the team and going through Friday’s practice.

“He’s been in the Zoom meetings watching all of the installs and stuff and we threw him out there today, and he didn’t make any mistakes and was able to line up with confidence,” Shanahan said. “Mo is a pro. Mo works at it. It was good to see him today, I hadn’t seen him for a while, and I’m glad to have him here. I know if we go with five [active receivers], we won’t hesitate to have him out there and I know he’ll be ready.”