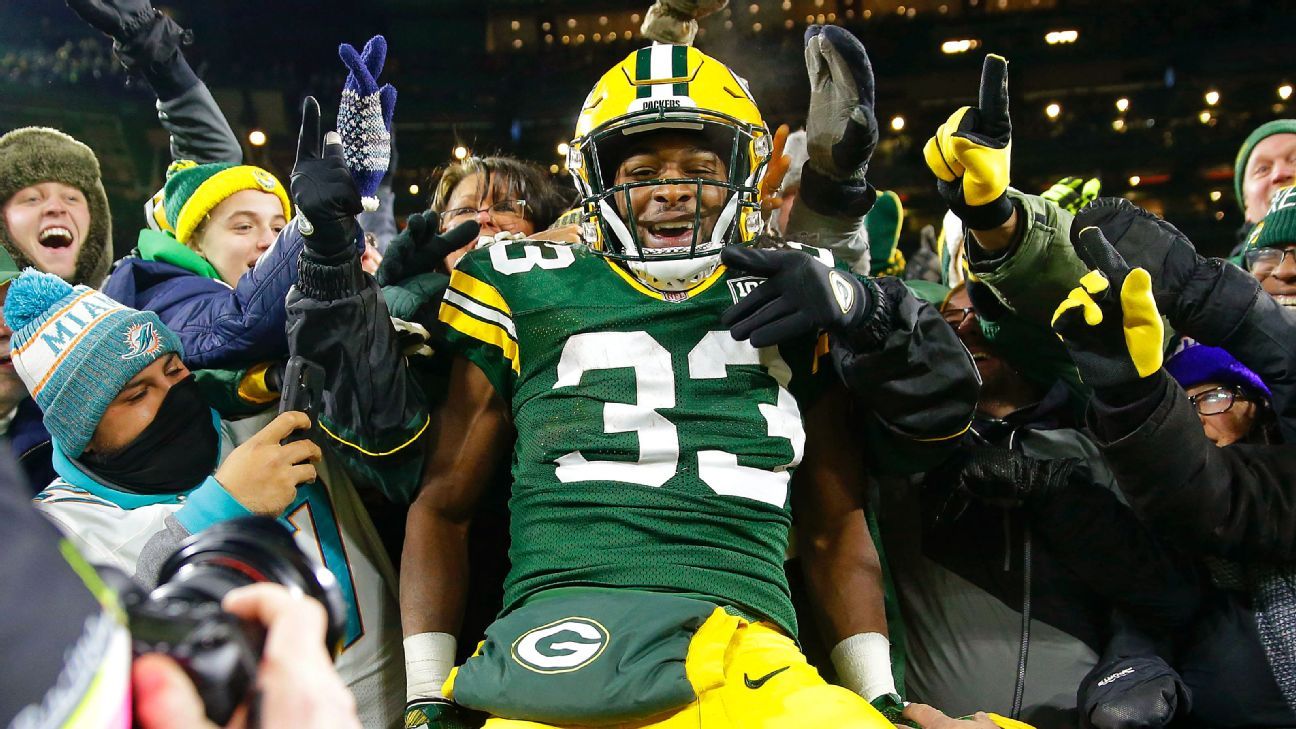 GREEN BAY, Wis. — Aaron Jones isn’t going to stop Lambeau Leaping just because the Green Bay Packers won’t have any fans in the stands, and he won’t stop listening to contract offers even though he didn’t get a deal done on the eve of the season, like fellow 2017 draft class running backs Dalvin Cook and Alvin Kamara did.

Jones and the Packers got their first look Friday at how Lambeau Field will be configured for Sunday’s home opener against the Detroit Lions. The team practiced in the stadium, which has the first eight rows of bleachers covered with signage and advertisements during the coronavirus pandemic.

“You’ll definitely still see a Lambeau Leap from me, probably right on one of those tarps,” Jones said after practice on Friday. “Just gotta pick which one, or wherever I score at or the location I’m at it’s gonna be that one. Definitely different seeing it, though, replacing the fans and just the tarp. Definitely not the Lambeau we’re used to.”

Jones is one of the most likely Packers to get the chance for a Lambeau Leap, considering he tied for the NFL lead with 19 touchdowns last season. He scored once last week at Minnesota in the Packers’ Week 1 win, when he rushed for 66 yards on 16 carries.

But is he one of the most likely Packers to get a contract extension?

They signed nose tackle Kenny Clark to a four-year, $70 extension in August. Clark, who suffered a groin injury against the Vikings, has been ruled out against the Lions. Jones is one of four other starters with expiring contracts, including All-Pro left tackle David Bakhtiari, center Corey Linsley and cornerback Kevin King.

The Packers and Bakhtiari were about $4 million per year apart on a deal before the season, according to a source familiar the negotiations. Bakhtiari is seeking to match or exceed the $22 million per year that Houston’s Laremy Tunsil makes as the NFL’s highest-paid tackle.

The Packers also have been talking to Jones about a contract extension since last spring but have not been able to get a deal done. Jones is making $2.133 million in the final year of his rookie deal. Last weekend, both Cook and Kamara signed extensions. The Vikings gave Cook a five-year, $63 million extension, while the Saints extended Kamara for five years and $75 million.

When asked what he thought about those deals, Jones said: “Just congratulations to those guys. They’re just helping out all the running backs on the market. So big kudos and congrats to those guys. It’s very well deserved to them.”

Jones, a fifth-round pick, had a breakout season last year with 1,558 total yards from scrimmage. He tied Carolina’s Christian McCaffrey for the NFL touchdown lead.

Jones said he’s not closing the door on the possibility of still getting a deal done during the season.

“I’m definitely open to getting something done whenever,” he said. “But like I said, that’s not my main focus. Just gonna continue to focus on football and helping this team bring in the wins, as many as possible.”