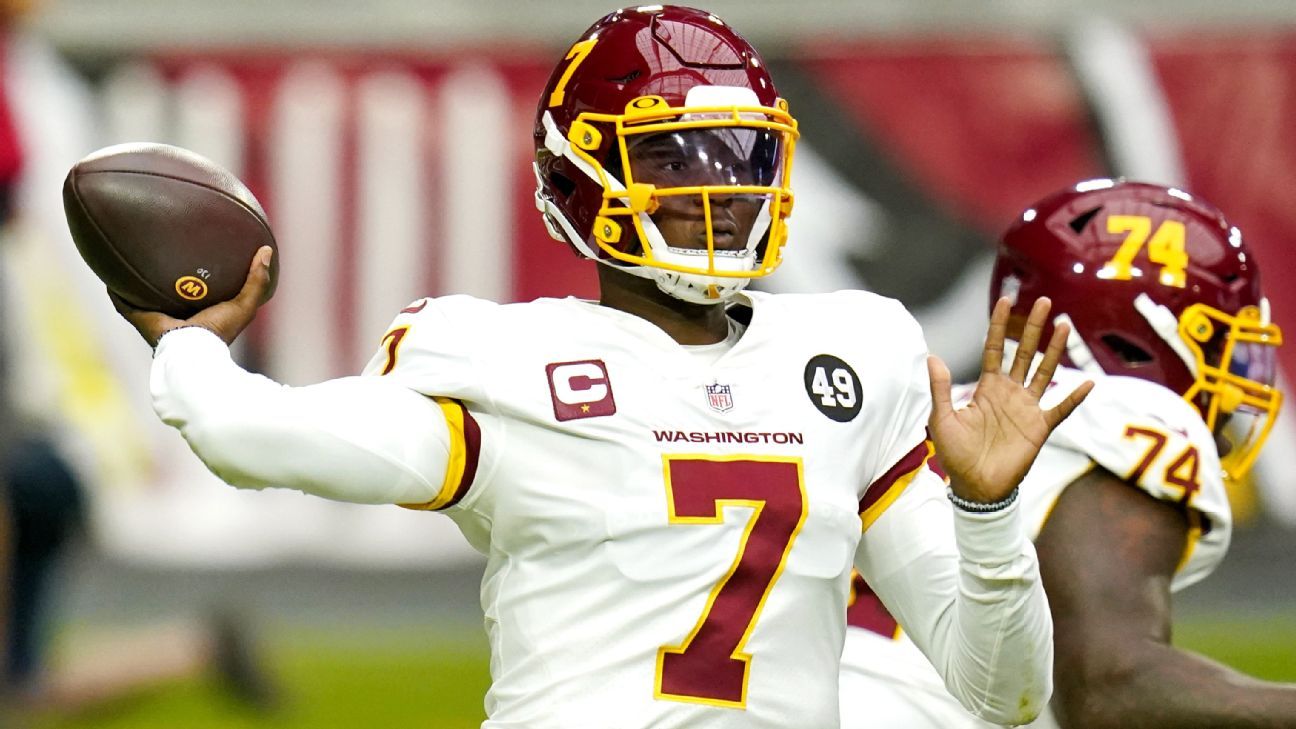 ASHBURN, Va. — Washington Football Team quarterback Dwayne Haskins, who missed Sunday’s game because of an illness, was sent home from the practice facility for the same reason Wednesday.

Haskins, benched a week ago, was at the facility Monday but when he showed up Wednesday he wasn’t feeling well again. After doctors checked him out and gave him medicine, Haskins took a COVID-19 test and was then sent home. Washington coach Ron Rivera said Haskins’ sickness is not COVID 19-related, but rather gastrointestinal.

Meanwhile, the player who replaced Haskins in the starting lineup, Kyle Allen, did practice Wednesday and Rivera said he’ll start Sunday at the New York Giants. Allen left Sunday’s loss to the Los Angeles Rams in the second quarter with an arm injury. Alex Smith will be the No. 2 quarterback with Haskins, for a second consecutive week, serving as the No. 3.

His demotion has led to all sorts of speculation. Rivera declined to comment on whether they’re looking to trade Haskins, the 15th overall pick in 2019, or whether the QB had asked for a trade.

“I’m not going to talk about football business,” Rivera said. “We’ll cross the bridges as we get to them.”

But multiple sources have said that there’s been no formal request for a trade nor has any team yet called Washington to inquire about Haskins’ availability. Washington would like Haskins to learn from the benching and the reasons behind it — lackadaisical practice habits and not putting in enough time away from the facility during the week to prepare. It has frustrated coaches and teammates.

Rivera stressed once more that the lack of a typical offseason and the loss of four preseason games didn’t help Haskins either. Both Allen and Smith have experience in offensive coordinator Scott Turner’s offense.

“This is an opportunity for him to learn and grow and develop,” Rivera said of Haskins. “I have not quit on the kid as far as his development.”

Rivera said he’s hopeful that Haskins returns to practice Thursday. He did participate in each practice session last week. He woke up Sunday feeling sick and was told to go home.

His replacement, Allen, was told to keep his diving to a minimum during games. Offensive coordinator Scott Turner said Allen shouldn’t be diving for a first down in traffic as he did Sunday.

“We’ve got to be smarter than that,” Turner said. “Obviously, not only is it kind of a bonehead play to put yourself in that situation, but it’s also selfish as far as now he got hurt and now he’s not available to help the rest of his teammates.”

Allen understands what Turner was saying. But he also said that play typifies his game.

“That’s why you see me do that on third-and-1 and stick my nose in there and try to go get it because it really does mean that much to me,” Allen said. “I’m always going to compete no matter where we’re at, what the standings are, what the score is. This is all I play the game for is competing. It’s every day.”