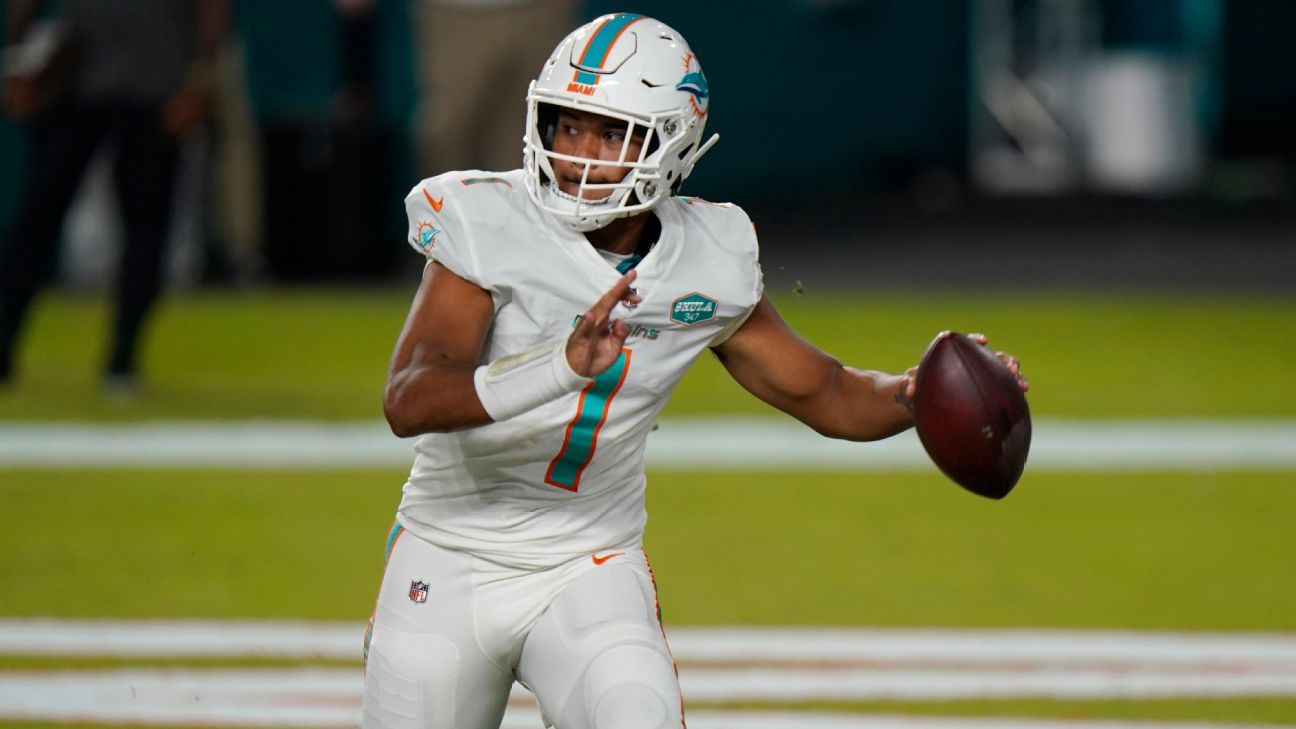 MIAMI GARDENS, Fla. — The Miami Dolphins crowd rose to its feet, making more noise than it had at any point during a 24-0 victory over the New York Jets as rookie quarterback Tua Tagovailoa jogged onto the field for his first NFL action.

Ryan Fitzpatrick waved his arms up and down in hopes of pumping up the crowd even louder. Other teammates clapped and hugged the sideline in anticipation.

Nearly a year since Tagovailoa suffered a scary, potentially career-ending hip injury at Alabama on Nov. 16, 2019, it was Tua Time.

In the final minutes of the game, Dolphins coach Brian Flores told Tagovailoa to warm up, and with a little over two minutes left, Tagovailoa entered the game, throwing his first two NFL passes, both completions.

Chants of “Tua” rang out as he ran onto the field.

“I know there was some excitement when he went in. I’m happy for Tua,” Flores said.

Fitzpatrick added: “That was just a cool moment for him, just the reception from the crowd that was here and us on the sideline.”

Tagovailoa also became the first left-handed quarterback to complete a pass since Kellen Moore did so for the Dallas Cowboys in Week 17 of the 2015 season.

“Yeah, I definitely could hear it. There’s nothing else playing in the stadium, so I could hear that,” Tagovailoa said. “And that was awesome. But to just be out there with my teammates, being my first time, and getting the support and love from them, I think that was super awesome. And then you have a 16-year vet like Fitz, who has no animosity toward it, as well, who’s just been supportive that entire time. Good drive, bad drive, he comes to the sideline and just talks through his process with why he did some things. I’m very fortunate to have a mentor like him who is just very encouraging on the field and then this guy is, like, he’s just very personable off the field, as well.”

After the game, Tagovailoa returned to the field, sitting down at the middle of the 15-yard line alone in full uniform for about 10 minutes soaking in the moment.

Tua Tagovailoa went back to the field and he’s sitting around the 15-yard-line in full uniform. It looks like he’s soaking this moment in.

He tried to find the spot where his Dolphins drive ended and then FaceTimed his parents, who couldn’t be there to see him play. They watch almost every game, and he wanted to share the moment with him. He said the conversation was emotional particularly because of everything it took for him to get back on that field.

Tagovailoa’s first pass came on a naked bootleg in his own end zone, and he throw a short pass over two Jets defenders to running back Patrick Laird for a 2-yard completion. His second pass was also impressive, a 7-yard completion to receiver Jakeem Grant for the team’s only third-down conversion of the game.

“The naked in your own end zone isn’t the easiest of plays, and he went in and completed that one and then completed the third-down, so I think that was a cool moment for him,” Fitzpatrick said. “Just the reception, too, of the fans that were here. And everybody on the sideline. We’re all excited to get him out there.”

Tagovailoa declared himself healthy, and he proved he could make the mobile plays that made him special at Alabama.

“It was just a glimpse of what’s going to be to come,” said Dolphins defensive tackle Christian Wilkins, who gave Tagovailoa a bear hug after the game.