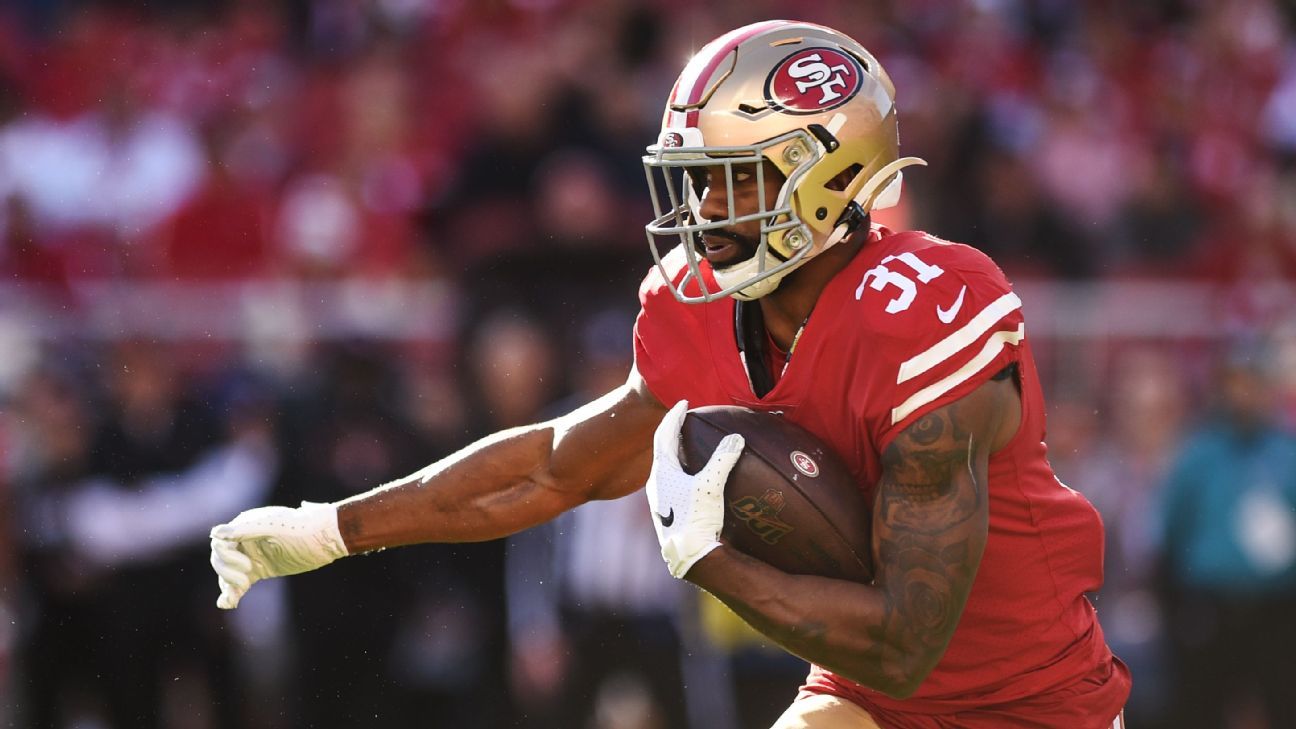 SANTA CLARA, Calif. — The San Francisco 49ers got an important bounce-back victory against the Los Angeles Rams on Sunday night but, as in their previous two wins this season, it came at a significant injury-related cost.

Niners coach Kyle Shanahan said Monday that running back Raheem Mostert suffered a high left ankle sprain in Sunday’s 24-16 victory over the Rams. Shanahan added that Mostert will “most likely” land on injured reserve with the capability of returning after missing three games, though his injury could keep him out longer.

Mostert isn’t the only 49ers starter who is probably headed to injured reserve. Center Ben Garland has a calf strain that Shanahan said will keep him out awhile and he, too, is set to go on injured reserve later this week.

Safety Jaquiski Tartt (groin) and left tackle Trent Williams (ankle sprain) are also being evaluated further and will be monitored as the week goes on.

Mostert’s is the latest in a series of high ankle sprains to the Niners after quarterback Jimmy Garoppolo left with one in Week 2 and linebacker Kwon Alexander suffered one in Week 5. Neither of those players has had to go on injured reserve, but Mostert’s position would make it difficult for him to be back within three weeks, which makes injured reserve the appropriate move in his case.

Without Mostert — who leads San Francisco with 303 yards on 51 carries and boasts a 5.94-yards-per-carry average, which ranks second among all running backs — the Niners (3-3) will have to sort through a few options.

Jerick McKinnon would seem to be the first choice after filling in for Mostert earlier this season. Although he’s eligible to return from injured reserve, Tevin Coleman isn’t likely to return this week as he is still dealing with a sprained knee. Jeff Wilson Jr. is another option, though he was inactive Sunday night with a calf injury. Shanahan said the hope is Wilson will return to practice Wednesday.

That could mean an expanded role for rookie JaMycal Hasty, who provided a spark off the bench to help seal the win against the Rams by gaining 37 yards on nine carries in the second half.

“I just like he came in the game and the moment wasn’t too big for him,” Shanahan said. “We like to keep our guys fresh. Once we lost Raheem, [McKinnon] had been going for a while, it was a perfect time to change the pace and bring in a fresh guy and he was the guy that we had left and he came in and was ready for the occasion.”

The center situation is more defined as Garland is expected to miss considerable time. With veteran Weston Richburg still targeting a Week 12 return from the physically unable to perform list as he works back from knee and shoulder surgeries, Hroniss Grasu will take the reins at center.

Grasu, whom the Niners signed about a week into training camp, started in Week 1 against the Arizona Cardinals and filled in for Garland during the second half Sunday night.

“Never excited when you’re down to that situation but we feel pretty fortunate to have him right now because he did a good job in Week 1,” Shanahan said. “He has played in this league and he’s going to get the reps because Ben is going to be gone for a while. He’ll hopefully hold down the role until Richburg gets back.”