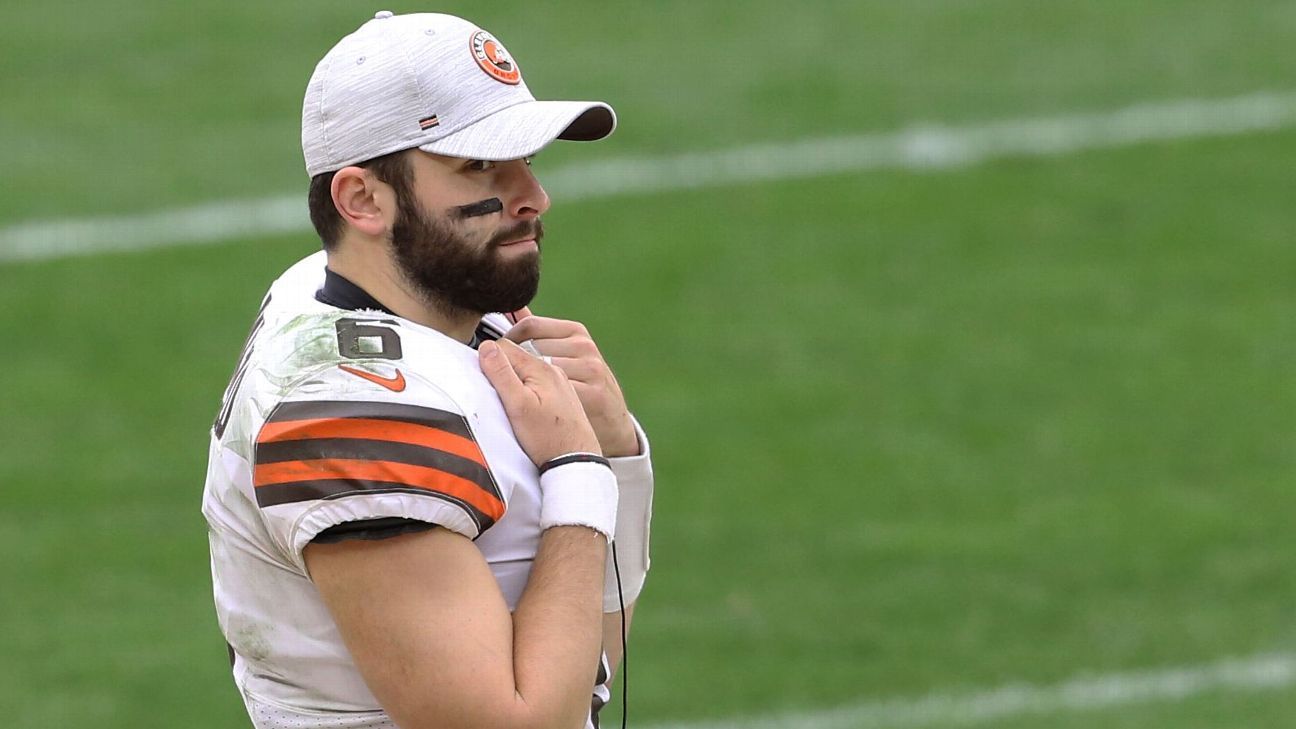 BEREA, Ohio — Baker Mayfield and Odell Beckham Jr. both admitted that even though the Browns still boast a winning record, it hasn’t felt like it this week following a deflating 38-7 loss to the Pittsburgh Steelers.

“The feeling throughout [our] building after that loss — 4-2 has never felt so much like 0-6 before,” the Cleveland quarterback said Wednesday. “But that’s because we have very high expectations for ourselves.”

Beckham seemed especially frustrated in Pittsburgh and visibly upset pacing along the sidelines in the fourth quarter after getting pulled.

“I’m pissed,” Beckham said Wednesday. “And at this point, I don’t really care to keep trying to make myself look like a good guy to the world and all that s—. … Tired of losing. Tired of losing to good teams.”

The Browns last held a winning record during the 2014 season. But an otherwise strong start has been marred by blowout losses to AFC North rivals Baltimore and Pittsburgh, which combined to outscore Cleveland 76-13.

Despite that, ESPN’s Football Power Index gives the Browns a 56.6% chance to finally snap the NFL’s longest playoff drought of 18 years. According to FPI, Cleveland also faces the easiest remaining schedule in the league.

“We’re eager to get back to work,” Mayfield said. “Fix the problems we know are within our control.”

Mayfield has taken the brunt of the criticism for the loss to the Steelers after producing a QBR of 5.5, the third-worst performance of any quarterback this season. While battling a chest injury that limited him in practice last week, Mayfield threw a pick-six on Cleveland’s third snap, and Pittsburgh went on to sack him four times and intercept another pass. He was eventually replaced by Case Keenum late in the third quarter.

Coach Kevin Stefanski explained afterward, “I didn’t want to see him get hit one more time.”

“I’ve got to have a short memory playing quarterback,” Mayfield said. “It’s tough when you’re in a momentum swing like that to get back on track. But this position, you have to be able to do that.”

Mayfield said avoiding early mistakes will be key to bouncing back.

“Not let them up front pin their ears back and bring a bunch of different crazy blitzes,” he said. “Get the ball out of [my] hands, not give them a taste for hitting the quarterback, getting those sacks. … Playing the field position early on is more than OK.”

Mayfield said his chest and rib injury had improved since Sunday despite taking several big shots and that he expects to get more practice snaps this week.

And as for criticism from the pundits?

“I don’t give a damn what they say,” he fired back. “We know we can be better. I know I can be better. The outside noise doesn’t matter. They get paid to talk and we get paid to do our work. So that’s how it’s going to be handled.”

Like Mayfield, Beckham missed practice time last week after falling ill. He was away from the building Thursday and Friday while the team waiting to see the results of his COVID-19 tests. Beckham tested negative multiple times, clearing the way for him to play in Pittsburgh.

Beckham said he was never worried about catching COVID-19, but felt compelled to alert team officials he wasn’t feeling well.

“(But) I felt like it was the right thing to do to mention I may not have been feeling well, I just wouldn’t want it to spread throughout the building – if there was a case I would’ve possibly had it.”