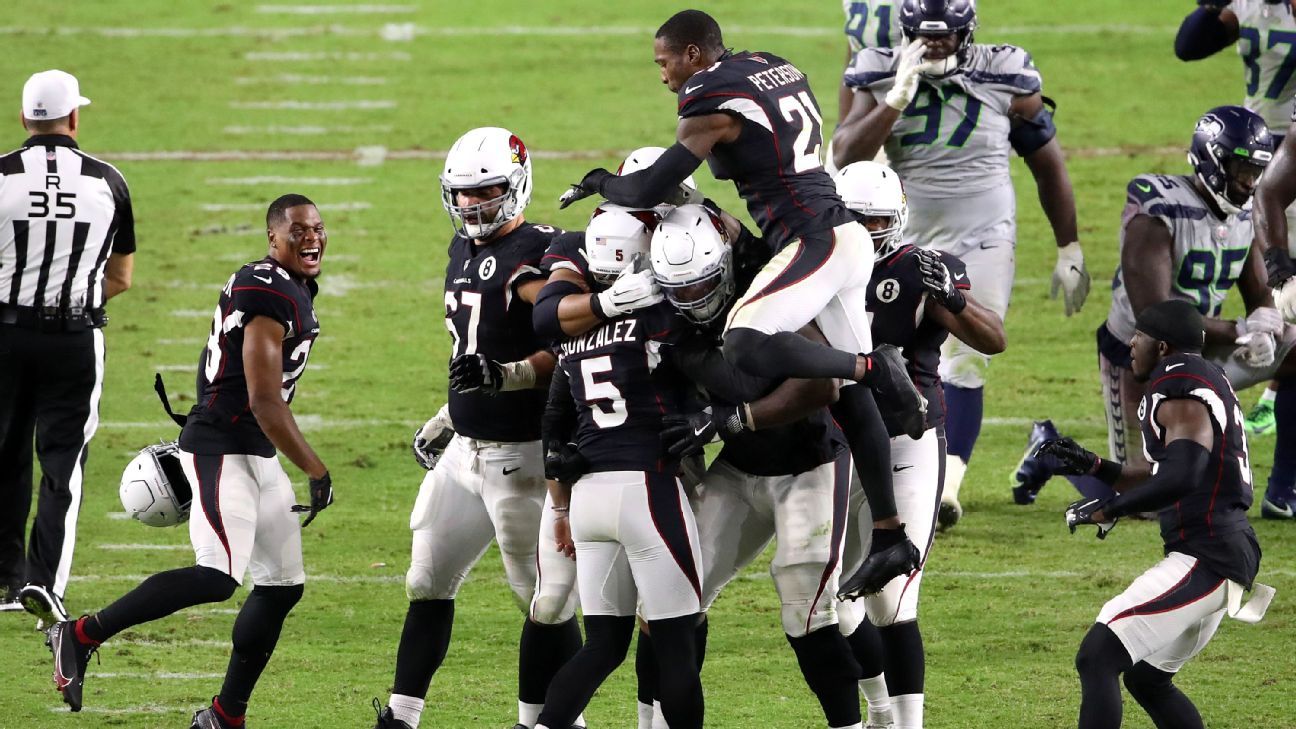 GLENDALE, Ariz. — Of all the players to lead the Arizona Cardinals to an overtime win over the Seattle Seahawks, he was one of the most unlikely.

Rookie linebacker Isaiah Simmons intercepted Seahawks quarterback Russell Wilson with 1 minute, 4 seconds left in overtime on his fifth snap of the game. Simmons didn’t play in the first half.

That led to Cardinals kicker Zane Gonzalez redeeming himself after he missed the potential winning field goal earlier in overtime. Gonzalez made a 48-yard kick with 20 seconds left in the extra period to give Arizona a 37-34 win and hand the Seahawks their first loss of the season.

Arizona improved to 5-2, holding on to second place in the NFC West with the 4-2 Los Angeles Rams playing Monday. Seattle leads the division at 5-1.

Coach Kliff Kingsbury nearly cost the Cardinals the game earlier in overtime, when he iced Gonzalez with 2:47 left on second-and-15. Gonzalez made the initial kick, but it didn’t count. He missed the next one.

“It was pretty bad, pretty much a complete debacle,” Kingsbury said of the series of plays that led up to his icing Gonzalez. “But luckily, those guys bailed us out. I got conservative and went for the field goal, and then we did not execute our center-left play, get our quarterback blown up, and then we were about to get a delay of game and had to take a timeout, kind of freeze our own kicker.

“So it was about as bad of a coaching job as possible by me. But our guys kept fighting, kept believing and found a way to get it done.”

Then came Simmons’ pick after a touchdown by Seahawks wide receiver DK Metcalf was nullified by a penalty.

“Couldn’t be happier for Isaiah,” Kingsbury said. “He’s a guy, due to not having an offseason or really a preseason, we’ve tried to put him in positions to be successful and work him in there, but you saw tonight, the ability he has to make that play in that situation was huge and will do wonders for him moving forward.”

It was another typical Cardinals-Seahawks game — full of drama, twists and turns. Arizona had not beaten Seattle at home since 2012. Since then, Arizona had gone 0-6-1 at home against the Seahawks, including a 6-6 tie in 2016, also on a Sunday night. However, Arizona is 5-2 in Seattle during that span.

Arizona held Seattle, the highest-scoring team in the NFL, to just a touchdown in the second half.

But seemingly every time the Cardinals came within a score, they couldn’t keep the Seahawks from scoring.

The Cardinals couldn’t get to Wilson during regulation but sacked him twice in overtime.

“So I’m just super proud of the team, the way we fought, not giving up, no matter the circumstances, just keep battling, keep battling. And that’s what we did. So I think that’s huge for us to take that next step.”

Murray threw for 360 yards and three touchdowns with an interception on 34-for-48 passing. He also had 67 rushing yards and a touchdown on 14 carries.

When the Cardinals needed Murray the most, he came through.

Arizona came within 34-31 with 2:33 left in regulation on Christian Kirk‘s second touchdown of the game and his fourth in the past two weeks. After forcing Seattle to punt, Murray orchestrated an eight-play, 54-yard drive that took 52 seconds to get the Cardinals into field goal range. He did that with an 11-yard pass to Larry Fitzgerald, a 15-yard run of his own, a 16-yard pass to Kirk and a 12-yard run by running back Chase Edmonds. Then Gonzalez hit a 44-yard field goal as time expired to send the game into overtime.

“I don’t think I smiled all game, honestly,” Murray said. “Just because it just felt like we just had to have your head down, just keep grinding. Just because when you’re playing Russell, anything’s possible, and I think everybody saw it tonight.

“For me, personally, my mindset was just move the ball, do what I do. Move the ball, be myself and lead the guys down the field, make smart decisions, take care of the ball. Whatever I see, go with it, trust it and do it with conviction, and let my guys — obviously, we got a lot of playmakers on my team or on the offense — get the ball in their hands, and let them do what they do.”

DeAndre Hopkins had 10 catches for 103 yards and a touchdown. Running back Chase Edmonds, who had two of the biggest plays in overtime, caught all seven of his targets for 87 yards. Larry Fitzgerald had 62 yards while catching all eight of his targets.

Wilson was 33-for-50 for 388 yards and three TDs with three interceptions. He rushed for 84 yards on six carries. His top target was Tyler Lockett, who had 15 catches for 200 yards and three scores.

The game was moved to Sunday night amid concerns that the Buccaneers-Raiders game might have to be postponed because of a positive coronavirus test on the Raiders and additional players being placed on the reserve/COVID-19 list as a result of contact tracing.

Now the Cardinals head into their bye week before hosting the Miami Dolphins on Nov. 8. Arizona travels to Seattle on Nov. 19, a Thursday night, for their second meeting of the season.

Kingsbury called Sunday night’s win “big” because of what it did for Arizona in the NFC West standings. The Cardinals are now 2-0 in the division.