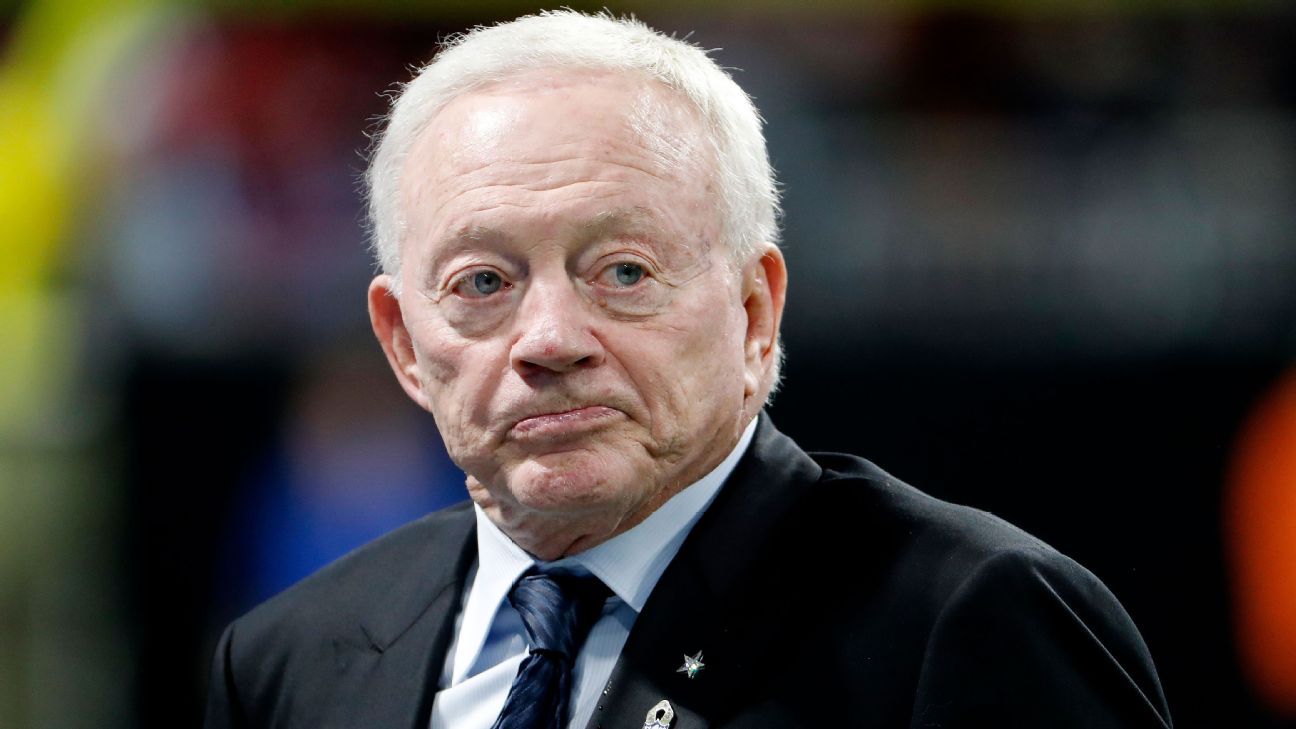 FRISCO, Texas — Dallas Cowboys owner and general manager Jerry Jones had a terse exchange during his weekly radio segment on Tuesday when asked whether the team has a leadership void.

Jones became curt on his appearance with the Shan & R.J. Show on 105.3 The Fan as one of the hosts attempted to clarify the question.

“Well, just shut up and let me answer,” Jones said while interrupting Shan Shariff. “No [he doesn’t see a leadership void].”

Jones later apologized for the exchange.

He is frustrated with the Cowboys’ 2-5 record as well as the fact that multiple players are out for the season due to injuries, including quarterback Dak Prescott, tackles Tyron Smith and La’el Collins, and tight end Blake Jarwin. He has noted in his past two radio appearances that the Cowboys have roughly 40% of their salary cap not on the field because of injury.

Jones was asked how much blame he deserves as general manager for the Cowboys’ record.

“As much as you give me when you’re talking about how great the talent is,” Jones said. “I think you basically step up there that it’s a joint effort, has been forever. And it’s a joint effort, have a lot of input, have input from some of the best there are in terms of opinions, in terms of deciding what to do. Have lived a life of being able to determine when there’s too much input, but don’t confuse the ultimate decision with just a single-minded decision.

“That’s not the way it works. Never has worked that way. Didn’t work that way from the first day I walked through this door. And I’ve had the last say on everything since I bought the team in 1989. Period.”

Jones said he anticipates some “personnel changes,” but he was not asked to elaborate. The NFL trade deadline is Nov. 3. He did back head coach Mike McCarthy on multiple occasions.

“One of the reasons Mike McCarthy is the coach is because he’s been through it,” Jones said. “He’s had tough times and he’s had disappointing times. … Certainly we couldn’t have wanted to be at this stage with our team this year, but if I’m going to hire a coach that will be at this stage and work through this for the betterment for the rest of the year and for what’s in the future, I’ve got my man.”

McCarthy made the playoffs in nine of his 13 seasons with the Green Bay Packers, made it to the NFC Championship Game four times and won a Super Bowl. Aside from the injuries, his first season with the Cowboys has been affected by the lack of an offseason program, full training camp and preseason games due to the ongoing coronavirus pandemic.

“You wanted someone in case the you-know-what hit the fan that had the credibility and had the doability to do what? Stand tall and strong as the head coach. And he’s doing that,” Jones said. “In answer to your question, he’s doing that in the face of adversity.”

Jones closed the interview with an olive branch to the hosts.

“If I were a little abrupt there, then I really don’t want to have our day start that way. You’re too good of men for that,” Jones said. “This certainly isn’t my most tactful time, you might say, with this thing, as we discuss these matters. I’m disappointed for our fans. I can’t tell you how disappointed I am. It was not the plan at all.

“We certainly want to point to things, but they’re not excuses. This is football. I’ll assure you right now we’ll put our head down. We haven’t spent the time, the years, the money, the effort and everything for the Dallas Cowboys to be where we are right now. There will be better days.”