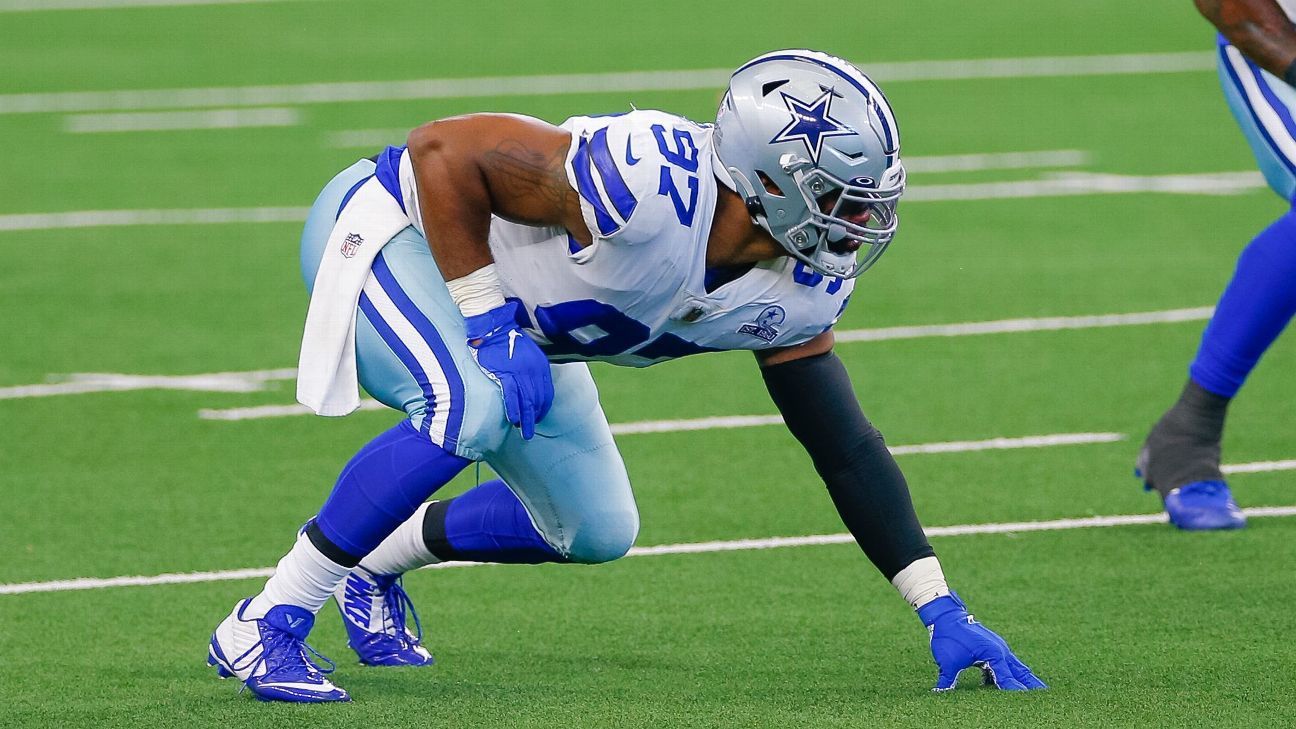 Terms of the conditions have not been announced, but multiple sources tell ESPN that Dallas received a conditional sixth-round draft pick in 2021 that could become a fifth-rounder.

Griffen gives Detroit another pass-rushing option to shore up one of the biggest holes in its defense while Dallas saves a little more than $3 million against the cap. The Cowboys had talked with a number of teams about a possible deal for Griffen in recent weeks.

In August, he signed a one-year deal with the Cowboys worth $6 million with a $3 million base salary and per-week roster bonuses worth $187,500. In seven games, Griffen had 2.5 sacks, 14 quarterback pressures and 21 tackles in 281 snaps.

The trade of Griffen opens up playing time for Randy Gregory, who had just six snaps of action against the Washington Football Team on Sunday, as well as potentially rookie Bradlee Anae, who was inactive for the first time last week.

The 32-year-old Griffen was in his first season in Dallas after playing 10 seasons with Minnesota and becoming one of the NFL’s better pass-rushers. In Minnesota, Griffen was a dominant force very familiar with the Lions. In 19 games against them, Griffen had 16 sacks — including at least one in his past six games against them and in all four when he faced his new head coach, Matt Patricia.

Due to COVID-19 protocols, Griffen’s first game for Detroit won’t be until Nov. 8, when the Lions play in Minnesota.

The Lions desperately need help with their pass rush to go along with Trey Flowers and Romeo Okwara on the edge. Flowers and Okwara have six of Detroit’s eight sacks this season — a total that ranks at No. 28 in the NFL — and the Lions have sacked quarterbacks on only 3.8% of their passing attempts this season.

Griffen should be able to help Detroit both with its pressure on the quarterback and converting sacks. He’s had 5.5 or more sacks every season since 2012.

“This year has been a journey for my family,” Griffen said in a tweet Tuesday. “I was so blessed to be able to spend this time with the Dallas Cowboys. I want to thank the Jones family and Coach McCarthy for the opportunity.”

In a subsequent tweet, Griffen thanked the Lions for giving him another opportunity and said he can’t wait to play for the team.

Lions defensive coordinator Cory Undlin was in the middle of his weekly news conference when the trade for Griffen was first reported.

“Breaking news to me. Appreciate the heads-up on that,” Undlin said. “Probably go back to the staff room and see what we got on the board there. We’ll take a look at it. I’m not going to really comment on it. Obviously, you just told me.

“I knew there was obviously some stuff going on, had no idea until you just told me. But we’ll be excited, just like we do when any new player comes in here. We’ll welcome him with open arms and then see what we can do and put him in the best position to help all of us, not just us on defense but everybody.”

This is the fourth major move the Lions have made around the trade deadline in the past two-plus seasons. In 2018, the Lions acquired Damon Harrison from the Giants to shore up their run defense and traded receiver Golden Tate, in the final year of his contract, to Philadelphia. Last season, Detroit traded starting safety Quandre Diggs to Seattle.