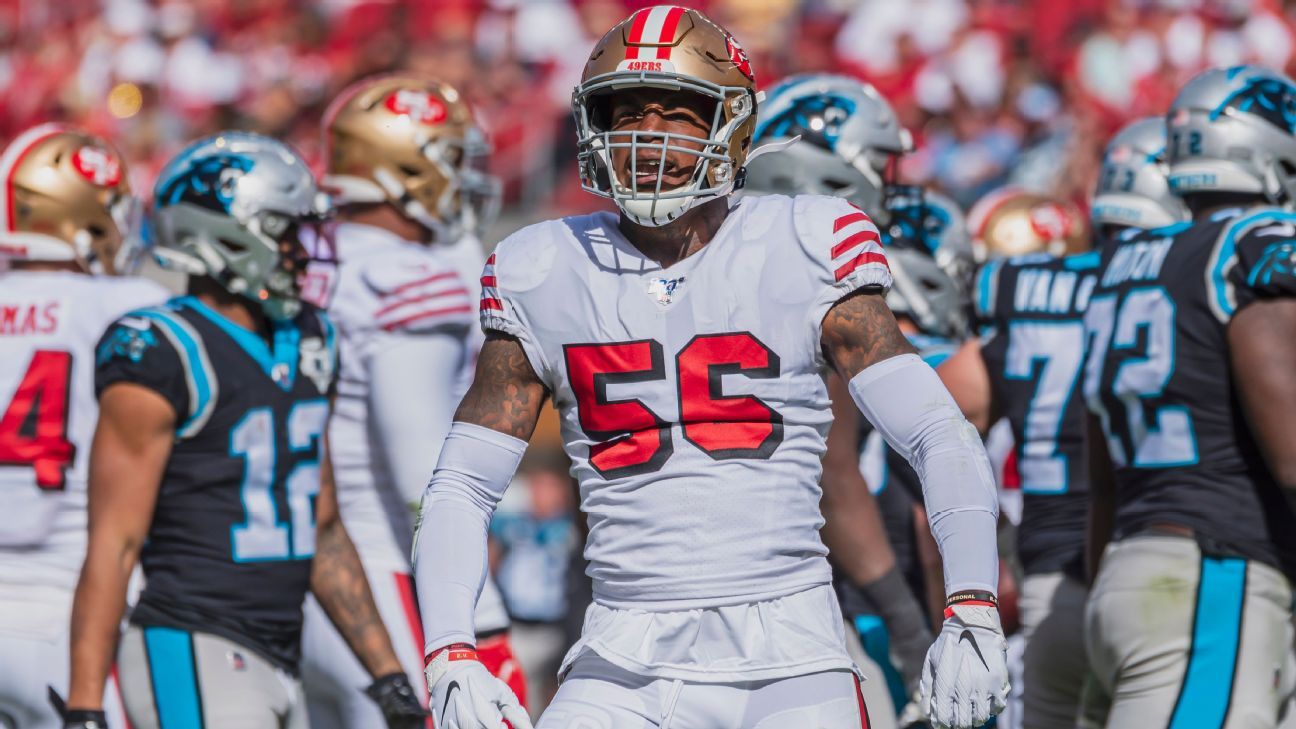 METAIRIE, La. — The New Orleans Saints continued their aggressive approach toward the 2020 season by acquiring linebacker Kwon Alexander from the San Francisco 49ers in exchange for veteran linebacker Kiko Alonso and a conditional fifth-round draft pick.

The 49ers signed Alexander to a four-year, $54 million contract as a free agent from Tampa Bay last season. But Alexander, 26, was limited last year by a torn pectoral muscle before returning for their playoff run. This was a way for the 49ers to shed salary because they like their depth at the position — specifically second-year linebacker Dre Greenlaw, who has started in Alexander’s place whenever he has been injured.

The Saints, meanwhile, have one of the NFL’s best run defenses. But the athletic 6-foot-1, 227-pounder should help their pass coverage while playing alongside All-Pro Demario Davis. Both players are Mike/Will linebacker hybrids.

Coach Sean Payton said Monday the Saints envision Alexander as a Will linebacker, where he will compete for playing time with current starter Alex Anzalone while Davis plays more of the Mike linebacker role.

Payton said it would be difficult for Alexander to play Sunday night at Tampa Bay because of the five-day onboarding process that is required. But Payton said the “goal” is for Alexander to be able to suit up in Week 10 — against the 49ers of all teams in New Orleans’ Mercedes-Benz Superdome.

“We’ve had a chance obviously to see this player in our division,” Payton said of Alexander, who spent his first four seasons with the Tampa Bay Buccaneers. “It’s adding another player that we think fits what we’re doing. It also gives us another athletic player at that position that can run.”

Payton disagreed with the idea that Alexander’s pass coverage is his most significant trait.

“No, I wouldn’t just say that. He’s very good in coverage, but he’s also very good in defending the run game,” Payton said. “He does a lot of things well. He’s smart, he’s instinctive, he’s a run-and-hit player that has very good speed and instincts.”

The 49ers wound up paying Alexander about $26 million for his year and a half with the team, according to figures from ESPN’s Roster Management System. They will incur a dead-money hit of just under $7 million for 2021 from the bonuses and guaranteed money that they have already paid to Alexander. But that still marks a savings from his scheduled 2021 cap hit of $16.5 million.

Alexander, who was originally drafted by Tampa Bay in the fourth round out of LSU in 2015, made the Pro Bowl in 2017. He has started a total of 59 games in his career with 444 tackles, seven interceptions and eight forced fumbles.

Alonso, 30, was a 2013 second-round draft pick who has now been traded four times in his eight-year career from Buffalo to Philadelphia to Miami to New Orleans to San Francisco. The 6-foot-3, 239-pounder has started 67 career games with 588 tackles, 10 interceptions and seven forced fumbles.

Alonso is a versatile linebacker who joined the Saints in a trade just before the 2019 season and played well in a part-time role. He tore the ACL in his right knee during their playoff loss to the Minnesota Vikings — the third time he had torn an ACL dating back to college (the right knee twice and the left knee once). Alonso is due $850,000 in remaining salary this season, plus some not-likely-to-be-earned bonuses.