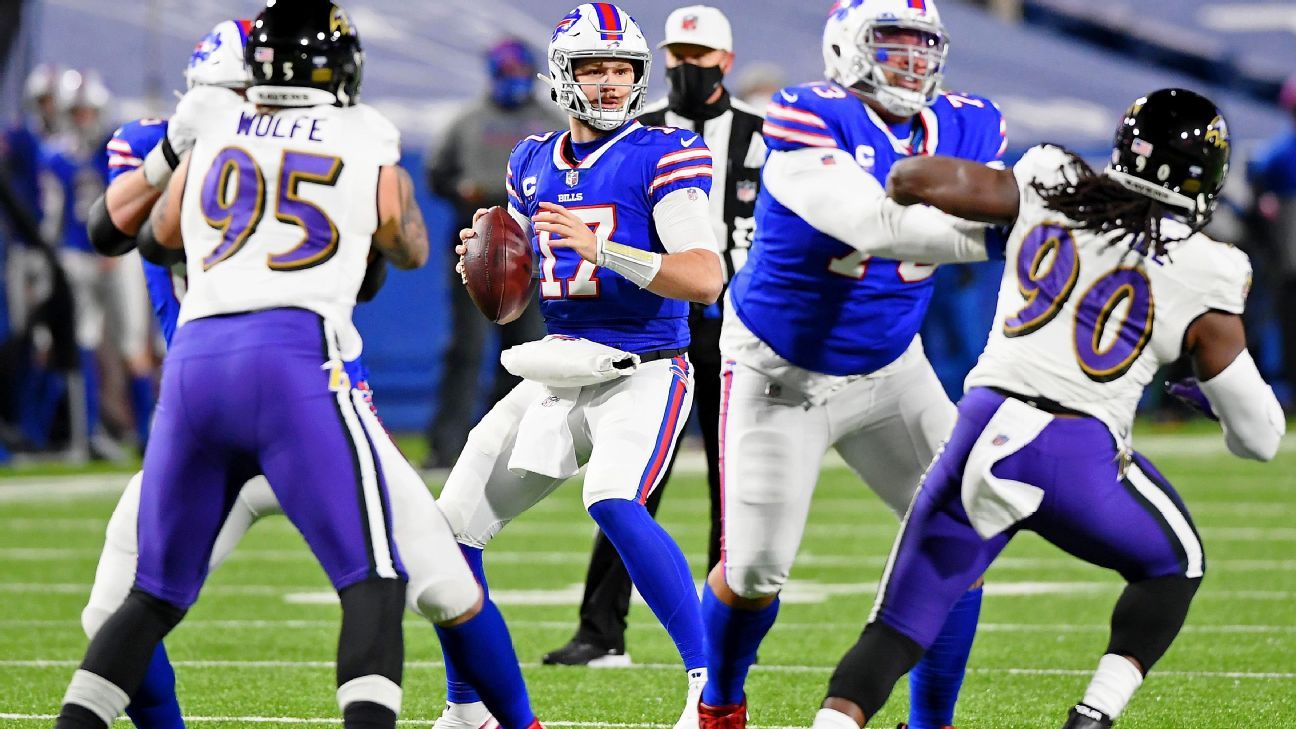 Sparked by cornerback Taron Johnson‘s record-tying 101-yard interception return for a touchdown in the third quarter, the Buffalo Bills defeated the visiting Baltimore Ravens 17-3 on Saturday night to advance to the AFC Championship Game for the first time since the 1993 season.

The second-seeded Bills will face the winner of Sunday’s game between the Cleveland Browns and Kansas City Chiefs (CBS, 3:05 p.m. ET).

If the defending Super Bowl champion Chiefs win, the Bills will travel to Arrowhead Stadium for the game next Sunday at 6:40 p.m. ET.

If the Browns win, the AFC Championship Game will be played in Orchard Park, New York, next Sunday at 6:40 p.m. ET.

The last time the Bills played in the AFC Championship Game was Jan. 23. 1994. They beat the visiting Chiefs in that game to earn their fourth straight trip to the Super Bowl (a game they would lose for the fourth straight year).

The Bills’ return to prominence under fourth-year head coach Sean McDermott has had Western New York buzzing, with Saturday night’s game played before approximately 6,700 fans at Bills Stadium that sounded more like 67,000 on NBC’s television broadcast. The stadium had been closed throughout the regular season due to COVID-19, but state and local officials put together a plan for the postseason that allowed attendees who registered a negative COVID-19 test to attend.

Just as it appeared the Ravens were driving for a potential tying touchdown on a march that lasted more than eight minutes, Jackson didn’t seem to see Johnson cut underneath on third-and-goal from the 9-yard line.

On the Ravens’ next drive, Jackson was knocked out of the game after taking a hit and having his head bang against the turf. The Ravens announced he was in the concussion protocol, and the Bills closed things out against backup Tyler Huntley.

It was much tighter in the first half.

Buffalo ended the half with three total rushes — one on a scramble by quarterback Josh Allen on a designed pass play, and another coming with Allen’s kneel-down on the final play.

The three rushes tied for the fewest in the first half of a playoff game over the last 70 seasons, joining the Green Bay Packers (2016 NFC Championship Game), St. Louis Rams (1999 divisional round) and Houston Oilers (1990 wild card round).

The Bills notably turned to the run on their opening drive of the second half, which produced the game’s first touchdown — a 4-yard catch-and-run by receiver Stefon Diggs, who became the first Bills player with a receiving touchdown in consecutive playoff games since Pro Football Hall of Famer Thurman Thomas (1995-96).