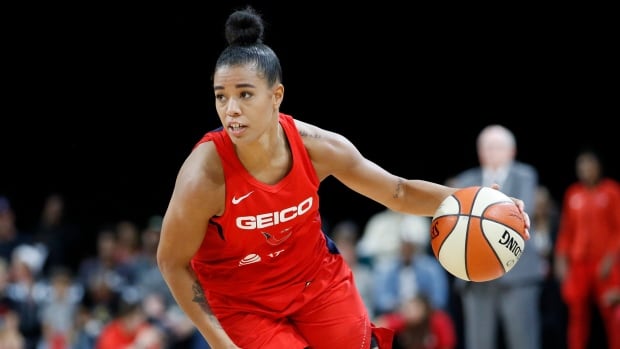 Natasha Cloud watched her wife, Aleshia Ocasio, win the Athletes Unlimited softball title this past summer and now will have a chance to win her own championship in the winter.

Cloud will be part of the new Athletes Unlimited basketball league that will debut in January.

“I’ve seen first-hand from the initial [softball] league how it’s a really dope thing,” the Washington Mystics guard said in a phone interview. “My wife just won the whole thing this past season and it was amazing.”

The basketball league will feature 44 players, including Cloud and former WNBA players Sydney Colson and Ty Young. All three are on the league’s executive council. The season will be played in the same city running from Jan. 29 through Feb. 28. Players will earn points each week based on their team’s results as well as some individual stats. At the end of the week, the leading four players will draft the teams for the next week’s games.

“Seventy to 80 per cent come from how the team performs based on winning quarters and winning the game,” said Athletes Unlimited Co-Founder/CEO Jon Patricof. “Fans today really care about individual players, free agency and moving teams so rapidly, among younger fans this format works really well.”

No Canadians involved yet

As of yet, there are no Canadians involved in the league, an Athletes Unlimited spokesperson confirmed to CBC Sports.

Brie King of Langley, B.C., was the lone Canadian to compete in the volleyball league.

A trio of Canadians played in the WNBA in 2021, but Kia Nurse’s recent knee injury likely renders her unable to play in the inaugural Athletes Unlimited basketball season.

That leaves the Minnesota Lynx duo of Bridget Carleton and Natalie Achonwa, not to mention the dozens of Canadian women who play professionally overseas, as possibilities to join the new venture.

The rules will be similar to the WNBA. There will be over $1 million US for the 44 players to earn with the winner receiving roughly $50,000. The league is still finalizing the city where the games will be played.

Besides trying to not let her wife have complete family bragging rights, being able to play at home for the 6-½ week season was appealing to Cloud.

“I have played overseas, it’s not what I want to do,” she said. “I don’t want to spend seven months away from my family. To have a competitive league and stay in shape and transition right in the W is new wave. I’m excited to be one of the pioneers for the basketball side of it.”

Athletes Unlimited started in 2020 and has softball, volleyball and lacrosse leagues in which there are no team owners and players share directly in league profits. Basketball is the first one that has an already well-established pro domestic league with the WNBA.

“We reached out to WNBA earlier this summer and we had a couple of meetings with them virtually,” Patricof said. “We shared our plans and our view is that we hope to be part of growing the sport.”

There’s also a charity component to it, as each player will be playing for a cause. At the end of the season, Athletes Unlimited will also donate 50 per cent to the players’ charities based on the bonus money the athletes won during the season.

“It’s everything to have that support from your league because we are much more than athletes,” Cloud said. “We have been given this platform to be a voice for the voiceless. We step on the court every night, not just playing for Athletes Unlimited, but also our charities of choice, so that adds a different sense of importance. We’re playing to fight for life and create opportunities and resources.”