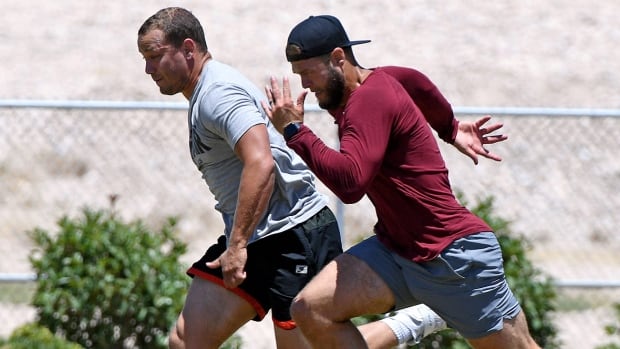 The NFL has informed teams their training camps will open on time.

League executive Troy Vincent sent a memo to general managers and head coaches on Saturday informing them rookies can report by Tuesday, quarterbacks and injured players by Thursday and all other players can arrive by July 28.

Rookies for Houston and Kansas City are set to report Monday.

The league and the NFL Players Association are still discussing testing for the coronavirus and other health and safety protocols. Union leadership expressed several concerns in a 90-minute conference call with reporters Friday.

However, under the collective bargaining agreement, the NFL can impose report dates.

The NFLPA could file a grievance to argue the league isn’t providing a safe work environment under the labour deal.

“The league is management,” NFLPA executive director DeMaurice Smith said Friday. “They have the exclusive right, just like somebody who owns a plant, regarding when it opens and when it closes. They want training camps to open on time. The role of the union is to hold them accountable about whether it’s safe to open now.”

The players’ union wants players tested daily for the virus. A joint committee of doctors, trainers and strength coaches formed by the NFL and NFLPA recommended testing every other day.

Other outstanding issues include number of preseason games. The league has planned to cut the exhibition schedule from four games to two while the union wants none.

Both sides are also negotiating economic issues and questions remain on players’ rights to opt out of playing.