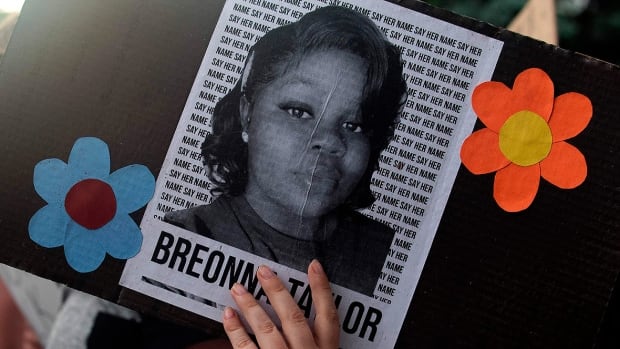 Terence Davis is using his platform for things bigger than basketball.

In Wednesday’s media availability, the Toronto Raptors rookie’s message was brief and direct. He answered his one question — about basketball — with a message about Breonna Taylor, the 26-year-old who was shot and killed by police officers on March 13.

“A lot of the guys, we’re united right now. We’re just keeping the focus on Breonna Taylor’s killers. That’s what I want to keep the focus on this week,” the 23-year-old said.

“It’s nothing against you guys — and I can answer all of you guys’ questions post-game or any time after we’re playing – but right now I just want to keep the focus on what’s really going on in the world. There’s a lot of social injustice going on and I just want to make sure that I’m doing the right thing and using my platform, as well as other athletes, to just continue with this thing, man.”

“We all stand united. We don’t all have to be on the same team but we’re still united in the league. I just want to keep the focus on Breonna Taylor’s killers and just keep that going, man, because it’s still going on in the world,” said Davis.

He then said goodbye to reporters, stood up and walked away.

The fight for ‘justice and equality’

Both the NBA and WNBA are using their restarts after the COVID-19 hiatus to amplify social and racial justice messages.

The 30-year-old was asked how he’s keeping himself busy in the NBA bubble at Walt Disney World.

“Right now with what is going on around the world, I’m trying to focus more on that …,” Ibaka said. “Justice and equality, that is what we are trying to fight for now.”

Ibaka, who held a virtual talent show on Instagram early in the coronavirus lockdown, said he was hoping to create a show that would allow NBA players the opportunity to share their thoughts on Black Lives Matter issues.

“I’m sure you know, but we want justice for Breonna Taylor and that is something we are trying to fight for, any player in the league, any player on my team, we try to fight for,” he said. “I think she deserves justice so my focus right now is on that.”

The Congolese big man said the racial unrest in the U.S. is going to be felt in all parts of the world.

“If we can fight for change here, that change is going to affect everywhere,” he said. “Like you saw when people started protesting in the United States, and then guess what? It led to people out in the streets protesting [everywhere].

‘Bree should be with us’

“The fact that we are protesting here is bigger than just here. It is going to affect everywhere.”

CJ McCollum, a shooting guard for the Portland Trail Blazers, told reporters that he and some other NBA players spoke with Taylor’s mother on a conference call recently.

Taylor’s mom Tamika told TMZ she appreciates how NBA and WNBA players are keeping a spotlight on her daughter’s death.

“Everyone raising their voices for justice are what keeps this family going each day,” Tamika Palmer said. “What is being done by the NBA and the WNBA is amazing. Now, it’s time for the attorney general to listen, to charge everyone responsible for Bree’s murder and to get overdue justice.

“Bree should be with us. The world was a better place with her.”

Two days before they step on the court for their first game in more than four months, the Toronto Raptors didn’t want to take it easy Wednesday.

So after a casual poll of players revealed they wanted to go harder ahead of Friday’s scrimmage against the Houston Rockets, coach Nick Nurse shredded his practice plan that had called for a light day.

“I just flipped it and decided that we’d go play a little bit more today and condition and compete today just after going around and talking to some of the guys in their pre-practice,” Nurse, who wore a facemask with a monogrammed “Coach Nurse.”

The NBA’s restart, with its marketing motto of “Whole New Game,” tipped off with four games Wednesday. Each team will play three scrimmages before the real restart begins on July 30. The Raptors open Aug. 1 versus the Los Angeles Lakers in their first real game since the global pandemic shuttered the league on March 11.

The first scrimmage in particular, Nurse said, will give him a true indication of where the Raptors — who only began practising on July 11 after a couple of weeks of one-on-none work — are at in terms of conditioning.