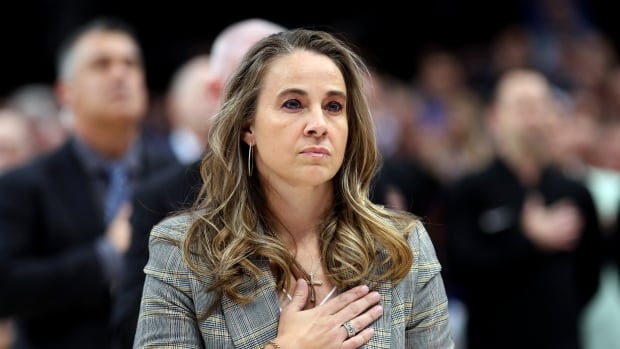 Thursday’s report card from The Institute for Diversity and Ethics in Sport (TIDES) at Central Florida assigned an overall A-minus score, with an A-plus for racial hiring and a B for gender hiring. The report examined a range of positions at the league headquarters and within franchises from the start of the 2019-20 season, then updated data this month as the league prepared to restart play amid the coronavirus pandemic.

Most notably, people of colour represented 28 per cent of general managers for a 24-year high at the start of the season, then reached 40 per cent with the July update. The study also found that women filled 33 per cent of team management positions, the highest mark in two decades after the overall gender score had fallen on each of the previous two report cards.

TIDES director Richard Lapchick, the lead report author, said the NBA “has been and continues to be the highest scoring men’s league when you’re combining race and gender hiring practices.”

“They have the most proactive diversity-inclusion office in professional sport,” Lapchick said in an interview. “And of course, they’re the same team that also leads the WNBA’s efforts in that area. They really take things to heart. But they want to keep pushing themselves. It’s one of the things I admire about the NBA’s leadership.”

Canadian universities and national sports groups say they have to do more to diversify their coaching staff and leadership, after CBC Sports carried out a visual audit and found the vast majority of those positions are held by people who are white. 2:10

The league received A-plus grades in racial hiring for its headquarters, players, head coaches, assistant coaches, team management and team professional staff, along with an A-minus for team general managers and B-plus for team vice-presidents.

Additionally, nine NBA teams had a person of colour or a woman as majority team owner, with no other men’s league “even close” to that total, according to the study.

Lapchick attributed slight decreases in the NBA’s overall and racial hiring scores due to TIDES changing its methodology to add a category for team chief executive officers or presidents in its report cards going forward. The league received F grades in that category for both racial and gender hiring, with people of colour and women each representing 10.9 per cent of those positions.

The NBA study is the first from TIDES for the 2019-20 or 2020 season, with report cards to come for Major League Baseball, the WNBA, Major League Soccer, NFL and college sports.