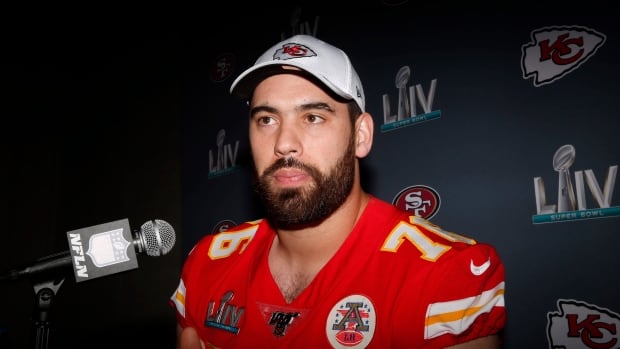 The 29-year-old from Mont-Saint-Hilaire, Que., became the first player to opt out of the upcoming NFL season due to the COVID-19 pandemic Friday. The KC starting right guard earned a medical degree from McGill University and has been working to fulfil his requirements to become a doctor in the off-season.

He has been on the front lines of the fight against the COVID-19 pandemic this summer and said in a social media post that if he is going to take any health risks, it will be to help patients.

“This is one of the most difficult decisions I have had to make in my life but I must follow my convictions and do what I believe is right for me personally,” Duvernay-Tardif said in a message on Twitter. “This is why I have decided to take the Opt Out Option negotiated by the League and the NFLPA and officially opt out of the 2020 NFL season.

“Being on the frontline during this offseason has given me a different perspective on this pandemic and the stress it puts on individuals and our healthcare system. I cannot allow myself to potentially transmit the virus in our communities simply to play the sport that I love.”

My decision regarding the 2020 NFL season <a href=”https://t.co/jrY3nZfNWO”>pic.twitter.com/jrY3nZfNWO</a>

“It was a very difficult decision, like Laurent mentioned in the statement it was one of the toughest decisions he had to make in his life,” said Sasha Ghavami, Duvernay-Tardif’s agent and longtime friend, who saw him struggle with the decision over the past few days.

Ultimately, Duvernay-Tardif decided if he was going to take a COVID-19 related risk in a pandemic, it would be with patients, not on the football field.

“He preferred not to put himself in that position this season,” Ghavami said. “If he was to be put in a position to take risks, it would be treating patients.”

His experience answering the Quebec government’s call for orderlies to work in long-term care homes hit hard with COVID-19 led him to his decision.

Duvernay-Tardif documented some of his time at Centre Gertrude-Lafrance, a facility in St-Jean-sur-Richelieu, south of Montreal, on his social media accounts.

“Laurent is a person with a lot of convictions and has always been true to his beliefs and what he thinks is the right thing to do for him,” Ghavami said.

The NFL and its players association agreed earlier Friday to an opt-out clause for the upcoming season. Those who choose to voluntarily will reportedly receive a $150,000 US stipend rather than their contractual salary while those with medical opt outs will receive $350,000.

The deadline to opt out is Aug. 3.

Duvernay-Tardif signed a four-year deal in February 2017. He recently renegotiated the contract and was scheduled to receive a base salary of $2.75 million this season.

Kansas City welcomed rookies to training camp earlier this week, though most of their time was spent undergoing tests for COVID-19 and routine physicals. Veterans such as Duvernay-Tardif were expected to arrive in the coming days.

Kansas City drafted Duvernay-Tardif in the sixth round of the 2014 NFL draft out of McGill. He’s been a starter at right guard since 2015 and helped the team win the Super Bowl last season, its second overall but first in 50 years.

Now, they will have to find a replacement for Duvernay-Tardif for the upcoming 2020 season.