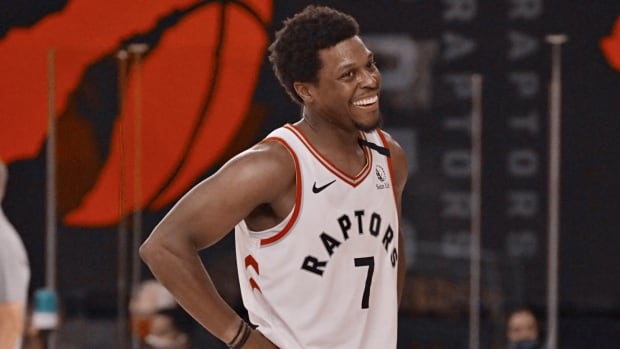 It was only 10 minutes, but it was enough to make Marc Gasol smile.

Nearly six months since he’d last played, the slimmed-down Spanish big man’s start was a highlight of the Toronto Raptors’ 110-104 victory over the Portland Trail Blazers on Sunday.

Serge Ibaka scored 19 points, while Pascal Siakam added 18 to lead the Raptors in their second exhibition scrimmage of the NBA restart in the Walt Disney World bubble.

Matt Thomas had 16 points, while Kyle Lowry had 13 points, six rebounds and four assists, and Terence Davis chipped in with 13 points.

CJ McCollum topped Portland with 21 points, while Yusuf Nurkic had 17 points and 13 rebounds.

Trailing Portland for most of the first half, they dug in on the defensive end in the second, and when Lowry and Davis hit back-to-back three-pointers late in the third quarter, the Raptors went up 80-67. They took a 87-75 advantage into the fourth.

Fred VanVleet appeared to go knee-on-knee with Portland guard Anfernee Simons. VanVleet left the game immediately and did not return. 1:09

Portland had a brief late-game burst but the reigning NBA champion Raptors already had the game well in hand.

Gasol, who hadn’t played since Jan. 28 — he didn’t play in the first scrimmage as coach Nick Nurse eases him back into action — had three points and four rebounds, but it was a triumphant return for the 35-year-old who’d missed 28 games of the pre-pandemic season nagging hamstring injury.

“You always wanna play more but . . . you’ve got to build it up,” Gasol said. “We know when the important times come and when the big games come, you have to be ready to take those bigger minutes.”

Gasol had chalked up his bad hamstring to Toronto’s long run in the NBA Finals, and then the World Cup in China — Gasol was a key member of the victorious Spanish team. He went into the four-month layoff intent on correcting the issues that caused his hamstring woes, and cranking up his overall fitness was a big part of that.

The one negative on the night for Toronto was the loss of Fred VanVleet less than a quarter in to the game. He suffered what the team called a “banged” left knee, but was able to jog unevenly off the court to the locker-room.

“I don’t think it was too bad, but it’s just a scrimmage, there’s no sense in trying to play him through that,” Nurse said.

Ibaka had another strong outing, shooting 3 for 5 from behind the arc. He looked in regular-season feisty form in a brief scuffle with Nurkic. His 18 points two nights earlier topped Toronto in scoring.

Gasol and Ibaka both started as part of Nurse’s “jumbo” lineup against a big Portland frontcourt of Nurkic and Hassan Whiteside.

Gasol said Ibaka’s ability to shoot from long-range is “crucial” to Toronto’s success.

“We have to be able to move guys out of the paint, especially if they try to go big as they did today,” said Gasol. “That’s what we work on. Having me and Serge out there does a lot of great things defensively, but offensively we’ve got to create space for Freddy, for Kyle, for Pascal, for OG [Anunoby], for Norman [Powell] to drive in there and create shots either for themselves or for us.

“It’s always a work in progress, it’s a matter of working together and doing what’s best for the team.”

The Raptors beat Houston 94-83 on Friday in a game that featured 10-minute quarters to help players readjust to games after the unprecedented layoff. Saturday’s game was back to the regulation 12 minutes per quarter.

The Raptors play Phoenix on Tuesday in their final exhibition schedule. The Raptors begin their title defence in earnest on Saturday when they battle the Los Angeles Lakers in the first of eight seeding-round games.

Finally back on the court more than four months after COVID-19 shut down the league on March 11, the scrimmages continue to pose unique challenges. Nurse said it’s tough to call a play or direct his players — his voice carries so well in the quiet fanless arena. And officials had to warn both teams’ benches on Sunday as their criticisms aimed at referees could also be clearly heard.

“There was a lot of talking, I know that much,” Nurse said with a laugh. “Everybody can hear everything everybody’s saying at both ends from the benches, It was actually kind of entertaining there for a while, both benches were kind of going back and forth a little bit, one guy would score and one bench would say ‘Hey!’ back and forth. It was pretty entertaining.”

The Raptors’ first seven shots Sunday were three-pointers, and they hit just two of them as Portland led for most of a first quarter that ended in a 25-25 tie.

Ibaka hit a three late in the second quarter to give the Raptors a one-point lead, but they trailed 54-49 at halftime.

Patrick McCaw sat out the game with an undisclosed injury.