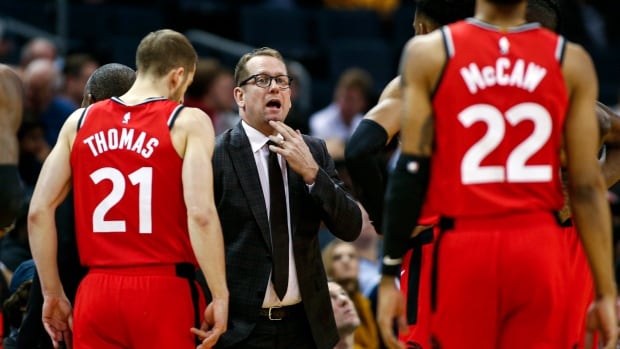 The lackadaisical defending and sloppy backcourt turnovers said everything about the Toronto Raptors’ exhibition finale.

They’re tired of scrimmages. Bring on the real games.

The weary-looking Raptors dropped a 117-106 decision to the Phoenix Suns — who have the worst record of the 22 teams at Walt Disney World — on Tuesday, suffering their only loss in three scrimmages in the NBA’s restart.

“I think I’m glad there isn’t any more of these, right?” coach Nick Nurse said afterward. “I think we’ve gone one too far with these . . . Certainly [based on] our mindset or the way we played tonight.

“But it’s OK. Listen, we didn’t have a lot of great, engaged play tonight, and it showed up in transition defence and contesting shots and missed assignments and things like that, but it’s so meaningless that you can kind of wash it away pretty quick.”

“Right after the game ended,” said Norman Powell, who had 14 points off the bench. “We’ll obviously talk about it and about how we can improve and get better, but we take it for what it is and move on to the next one. It’s real come Saturday so we can’t focus too much on this one.

“We’ll take the learning and see how we can get better for the actual seeding games and get ready for the real deal.”

Pascal Siakam had 17 points, while Fred VanVleet, who was back after missing most of Sunday’s scrimmage with a minor knee injury, had 13. Kyle Lowry had 11 points, seven assists, and took a couple of charges.

Mikal Bridges had 26 points to top the Suns, while Ricky Rubio chipped in with 22.

Playing their third game in five days, and coming off an unheard-of four-month layoff due to COVID-19, the defending NBA champions were both sloppy and a step behind the Suns (26-39), who are 13th in the Western Conference.

Toronto trailed 35-29 after one quarter. A Lowry three-pointer capped a 7-0 Raptors run and pulled Toronto to within four points late in the half. The Suns took a 66-60 advantage into the break.

Marc Gasol’s three early in the third gave Toronto its first lead of the game — 73-72 — but it was short-lived as the Suns outscored the Raptors 25-7 to end of the quarter and led 97-86 with one quarter left.

Nurse went to his bench in the fourth and the Raptors never threatened.

Turnovers cost Toronto — the Raptors committed 28 to the Suns’ 19.

“We must have had eight turnovers in the backcourt, which is just strange, you have one or two of those every two months normally,” Nurse said. “So just not very engaged and that’s it.”

The Raptors habitually follow up a bad game with a good one — and the next game means significantly more. The Raptors open the eight-game seeding round on Saturday versus the Los Angeles Lakers, their first real game since March 9, two days before the NBA shut down due to COVID-19.

The Raptors, who were second in the Eastern Conference (46-18) when the league suspended play, have the toughest schedule of the restart, including games against Milwaukee, Philadelphia, Boston and Miami.

“We try to play the same way, no matter what time [of day], who we are playing and where, but we all know that that’s not really the reality,” Nurse said of Tuesday’s loss. “[I’ve] always said that we tend to kind of use up a lot of bad play in one game sometimes and we usually respond really well, which … is good. That’s not a bad characteristic.”

The Raptors beat Portland 94-83 in their first scrimmage, then downed Portland 110-104.

The scrimmages weren’t just a warmup for players and coaches, it was a chance for the league and broadcasters to work out some glitches in these unprecedented circumstances. A virtual ad flickered on the court briefly in Tuesday’s game. The scoreboard for the TV broadcast at times showed the incorrect score, or disappeared altogether, and the referees had shot-clock issues.

In a state reeling from the coronavirus — Florida reported another 9,000 new cases on Tuesday — Disney World’s NBA campus is a unique view of sports’ return to action. Bench players have their own seats with name tags that are spread over three rows. Coaches wear masks. The scoring staff is protected behind a plexiglass window. Players are tested daily.