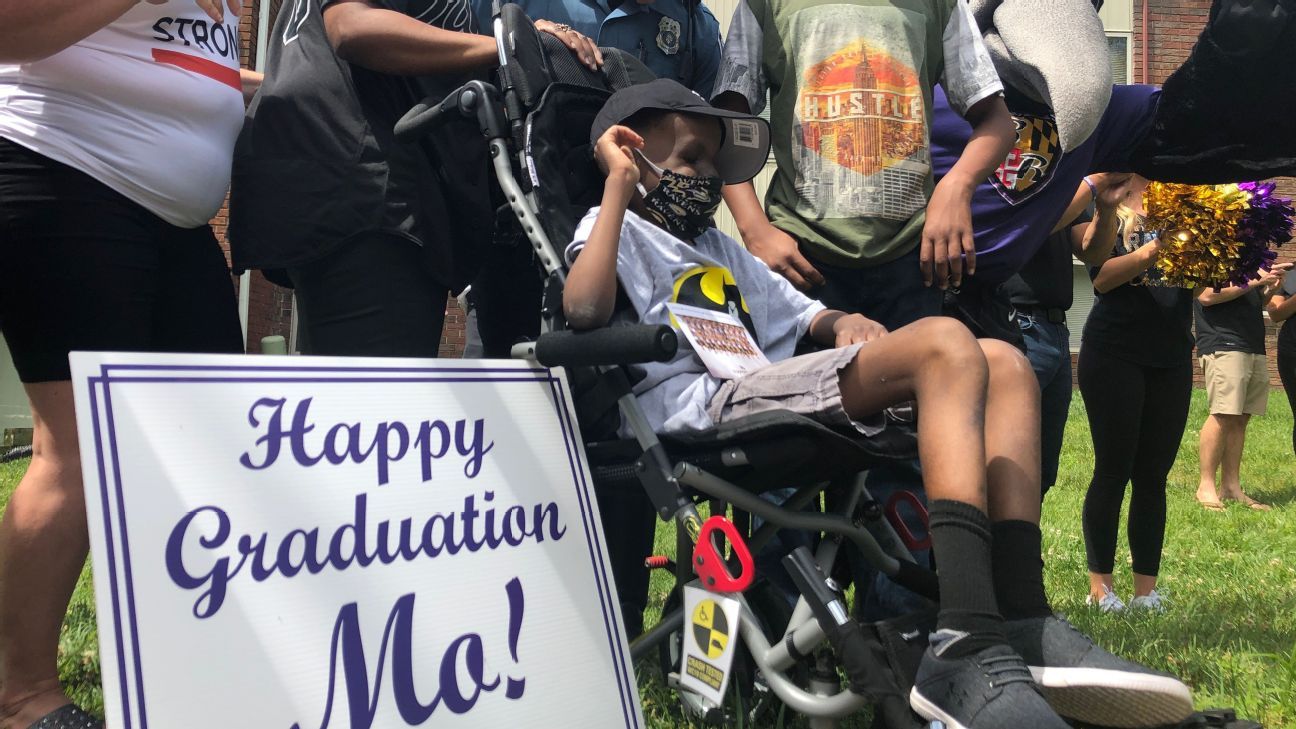 Mo Gaba, a beloved Baltimore superfan, died Tuesday from cancer. He was 14.

A frequent caller on a sports talk-radio show, Gaba became an inspirational figure for players on the Orioles and Ravens for his positive attitude and selflessness.

Last year at the NFL draft, Gaba made history by becoming the first person to announce a selection off a card written in braille. On Tuesday, he was inducted into the Orioles Hall of Fame just hours before he died.

“The world has lost a beautiful spirit and a shining light,” Ravens coach John Harbaugh said. “With his infectious laugh, amazing love of life and love of Baltimore sports, Mo captured the hearts of not only our organization, but the entire state of Maryland.”

Gaba’s celebrity in Baltimore started five years ago when he secretly called 105.7 The Fan while his mother was at work. Soon, he was throwing out the first pitch before an Orioles game and calling a play inside the Ravens huddle at practice, which resulted in a Lamar Jackson touchdown pass.

Thank you for everything, Mo.

Gaba grew close with Orioles outfielder Trey Mancini, who is undergoing chemotherapy treatment after having a cancerous tumor removed from his colon in March. Mancini spent an entire day with Gaba during the All-Star break two years ago.

“Your kindness, bravery and positivity has left a lasting impact on all of us who were lucky enough to have met you,” Mancini said Tuesday night. “You have truly made this world a better place.”

It has been estimated that Gaba spent 75 percent of his life at hospitals. His mother, Sonsy, first discovered Gaba’s health issues at 9 months old, when she noticed his eyes appeared white in a photo taken at a family gathering. He was diagnosed with a malignant tumor of the retina and soon lost his sight.

Gaba underwent operations, aggressive chemotherapy, radiation and a bone-marrow transplant to treat tumors on his neck, legs and lungs.

Less than two months ago, scans showed cancer had spread into his lungs and brain.

“I lost my best friend today,” Gaba’s mother posted on social media. “Your legacy will live on love bug.”

Six weeks ago, Gaba’s eighth-grade graduation was celebrated with a car parade, which included Mancini, Orioles catcher Austin Wynns, Ravens offensive lineman Bradley Bozeman and the Ravens marching band. Gaba was presented with a montage video that included several Orioles and Ravens wishing him the best.

“He’ll never know how many lives he touched,” said Ravens guard Ben Powers, who was selected in the fourth round in 2019 after Gaba announced the pick. “He will always have a special place in my heart.”

On Tuesday, Gaba became only the second fan to be inducted into the Orioles Hall of Fame. Lying in bed, he had the announcement read to him.

Our most dedicated fan is forever with us in our Hall of Fame. pic.twitter.com/usFYQk7s0p

“Mo Gaba, you have brought so much joy to so many people,” former Orioles outfielder Adam Jones said. “Your legacy will live on as a positive young man who never made an excuse and wanted your team to play hard. You’re such an inspiration. Rest easy big fella. You will be missed!”