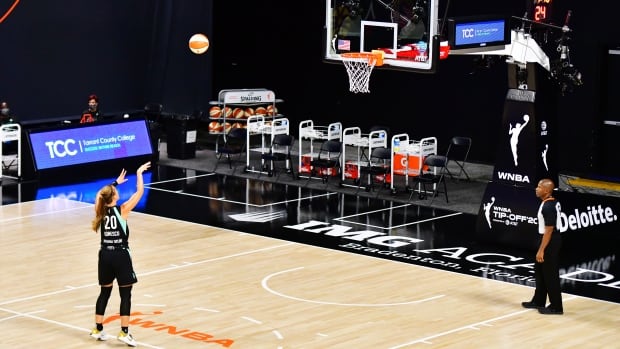 Arike Ogunbowale led five players in double figures with 20 points and the Dallas Wings earned a 93-80 win over the New York Liberty on Wednesday night.

Dallas’ balanced attack helped overcome a 33-point outburst from Liberty rookie Sabrina Ionescu, who was the league’s No. 1 pick in April. Ionescu finished 11-of-20 shooting, including 6 of 10 from 3-point range, and added seven assists and seven rebounds. Layshia Clarendon was the only other Liberty player in double figures with 11 points.

Canadian Kia Nurse returned to start for the Liberty after suffering an ankle injury in the first game of the season. Nurse managed just two points on 1-for-6 shooting, to go along with two rebounds, two assists and two turnovers.

Candice Dupree and Tiffany Mitchell combined for 47 points, Teaira McCowan recorded 20 points and 13 rebounds, and the Indiana Fever rallied after squandering a 12-point lead to hold off the Phoenix Mercury 106-100 on Wednesday in Bradenton, Fla.

The Fever outscored the Mercury 16-7 in the initial five minutes after halftime, extending a three-point lead to 72-60. But behind Bria Hartley, who scored a game-high 26 points off the bench, Phoenix responded with a 15-4 run to close out the third quarter.

The Mercury extended their rally into the fourth, pulling ahead 83-78 when Skylar Diggins-Smith knocked down a 3-pointer.

Toronto native Natalie Achonwa had 6 points and 6 rebounds as the Indiana Fever beat the Phoenix Mercury 106-100. 0:26

Indiana struggled much of the way to contain Brittney Griner, the 2019 WNBA scoring leader who scored 23 points and grabbed seven rebounds. A key defensive moment for the Fever, however, proved pivotal.

Griner was whistled for a charge with 8:10 remaining and the Mercury leading 83-80. Dupree (23 points, nine rebounds) sank a jumper as part of an 8-0 run.

The stretch proved decisive. Indiana never trailed again, but the Fever sweated out a close finish for their first win in the WNBA’s “bubble” at the IMG Academy.

Hartley connected on a 3-pointer with 17 seconds remaining, pulling Phoenix within three points. An errant inbounds pass became a fastbreak opportunity for Diggins-Smith, who made one of two free throws after being fouled.

Kelsey Mitchell chipped in 18 points and five assists for Indiana (1-1). McCowan produced her double-double after she managed just one point and four rebounds Saturday in Indiana’s season-opening 101-76 loss to Washington.

Canada’s Natalie Achonwa started at centre for the Fever, contributing six points and six rebounds in 12 minutes of action.

Phoenix, which lost its opener 99-76 to Los Angeles on Saturday, fell to 0-2 in the COVID-19-shortened campaign.