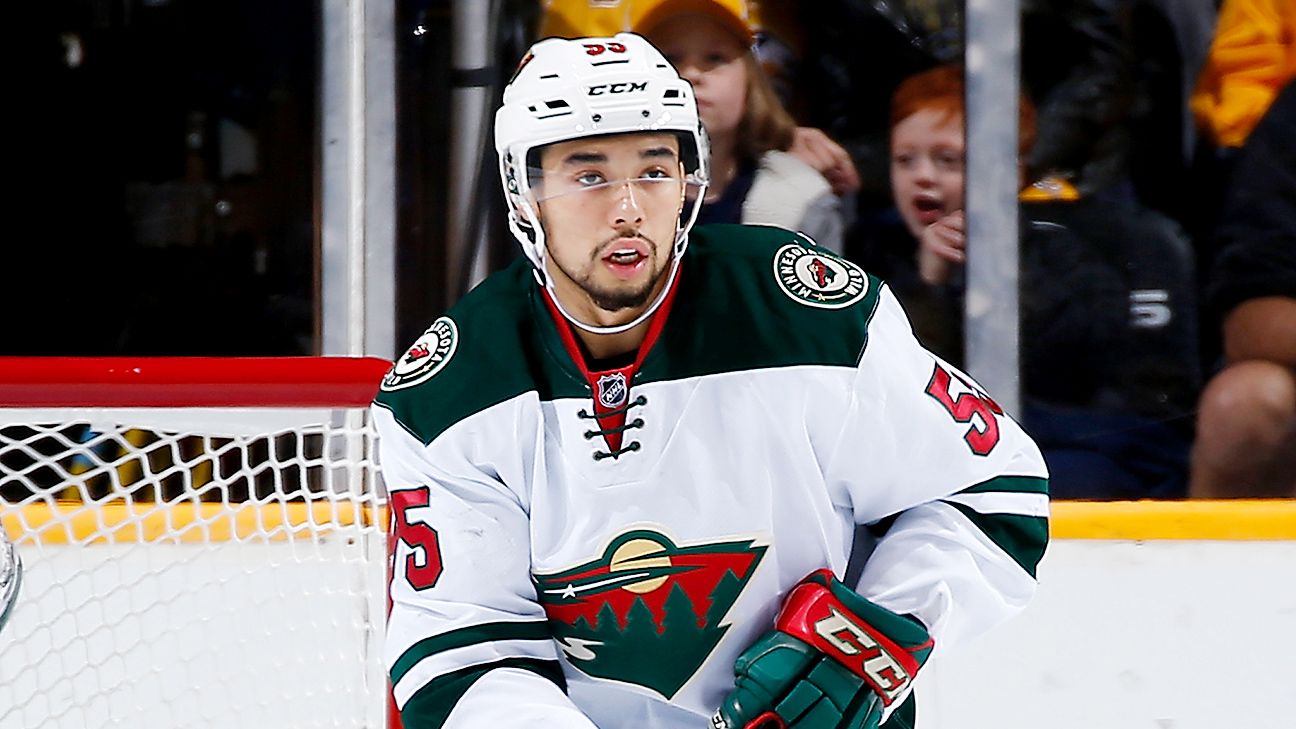 Minnesota Wild defenseman Matt Dumba opened the NHL’s Western Conference postseason with a heartfelt speech against racial injustice before taking a knee during the U.S. national anthem as members of the Edmonton Oilers and Chicago Blackhawks stood around him.

The NHL officially restarted its season Saturday with five games in Toronto and Edmonton, two neutral-site hub cities chosen because of the COVID-19 pandemic. Each game had an acknowledgement of the fight against racism, with “We Skate For Black Lives” ads on video screens around the rink.

Game 1 of the five-game series between the Oilers and Blackhawks in Edmonton was the first on broadcast television nationally in the U.S., and the first to feature an elaborate pregame ceremony.

Players for the Oilers and Blackhawks stood in a circle at center ice to honor both front-line workers during the COVID-19 pandemic and those fighting against racial injustice. At the end of a video that highlighted both, the screens flashed a graphic that read “End Racism.”

Dumba walked out in a sweatshirt promoting the Hockey Diversity Alliance, an organization founded this year by players of color to combat racial injustice and inequality in the sport.

“I’d like to say thank you to all the fans watching at home, and all the people making a positive difference in the world right now. We appreciate you. I know none of us have to be reminded right now about how our day-to-day lives have been affected by the outbreak of COVID-19. So I hope this Stanley Cup playoffs can bring a little normality and peace of mind to these times of uncertainty,” he said.

“I’ll transition to a topic that’s very important to me, my fellow members of the Hockey Diversity Alliance and the NHL. During this pandemic, something unexpected but long overdue occurred. The world woke up to the existence of systematic racism and how deeply rooted it is in our society. For those unaffected by systematic racism or are unaware, I’m sure some of you believe that this topic has garnered too much attention these last couple of months. But let me assure you that it has not. Racism is a man-made creation. All it does is deteriorate from our collective prosperity. Racism is everywhere and we need to fight against it,” Dumba said.

“On behalf of the NHL and the Hockey Diversity Alliance, we vow and promise to stand up for justice and fight for what is right. I know first-hand, as a minority playing the great game of hockey, the unexplainable and difficult challenges that come with it. The Hockey Diversity Alliance and the NHL want kids to feel safe, comfortable and free-minded every time they enter the arena,” he said.

Dumba closed by referencing the Black Lives Matter movement and Breonna Taylor, 26, who was shot and killed by police in Louisville on March 13. “So I stand in front of you today, on behalf of those groups, and promise you that we will fight against injustice and fight for what is right. I hope this inspires a new generation of hockey players and hockey fans. Because Black Lives Matter. Breonna Taylor’s life matters. Hockey is a great game. But it could be a whole lot greater. And it starts with all of us.”

The players tapped their sticks on the ice in appreciation. Dumba took a knee during the U.S. national anthem. No other players joined him. Goalie Malcom Subban of the Blackhawks and defenseman Darnell Nurse of the Oilers, both of whom are Black, stood by his side with their hands on his shoulders. Dumba would stand for the Canadian anthem.

The NHL has attempted to include social justice initiatives in its season restart. Players can customize stickers for helmets and clothing with “We Skate For” slogans, including for diversity and racial justice.