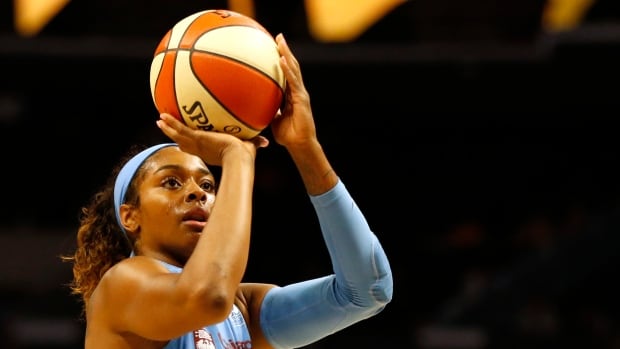 Gabby Williams and Cheyenne Parker each scored 16 points, Courtney Vandersloot had a late steal, and the Chicago Sky beat the Washington Mystics 88-86 on Saturday night.

Allie Quigley added 15 points, Kahleah Copper scored 14 and Diamond DeShields — who has seen limited action as she recovers from a knee injury — had a season-high 10 points for Chicago (3-1).

Washington’s Aerial Powers made 1-of-2 free throws to make it 84-all with 43.2 seconds left before Parker made a layup and Ariel Atkins hit two foul shots. Parker was fouled as she made a short jumper but missed the and-1 and the Sky led 88-86 with 5.9 to play. After the Mystics called a timeout, Vandersloot stole a pass from Emma Meesseman to seal it.

Storm get past Sparks

Breanna Stewart had 21 points, nine rebounds, five assists and four steals and the Storm never trailed in their win over the Sparks.

The Storm (3-1) bounced back from an 89-71 loss to the Washington Mystics on Thursday.

Candace Parker had 19 points and 12 rebounds to lead the Sparks (2-2). Riquna Williams hit 4 of 7 from 3-point range and finished with 16 points and Nneka Ogwumike scored 14.

Crystal Dangerfield had a season-high 17 points for the Lynx (3-1), who trailed by as many as 10 points late in the first half.

DeWanna Bonner led the Sun (0-4) with 28 points, including five 3-pointers, and Brionna Jones had a season-high 15 points. Bonner, acquired from the Phoenix Mercury this off-season in exchange for three first-round draft picks, is averaging a career-best 27.5 points.