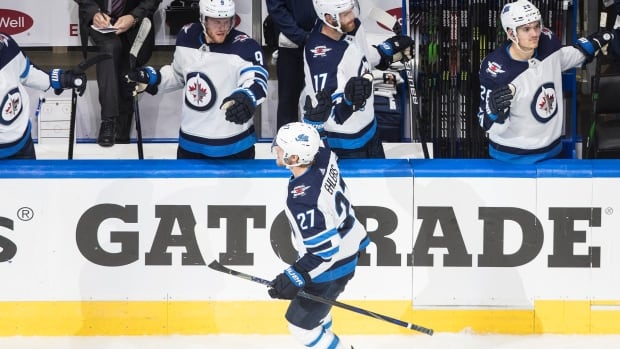 Nikolaj Ehlers’ first NHL playoff goal couldn’t have come at a better time for him and the Winnipeg Jets.

His power-play goal midway through the third period stood up as the winner in a 3-2 victory over the Calgary Flames, and compensated for Ehlers’ giveaway gaffe earlier in the game.

Minus stars Mark Scheifele and Patrik Laine, the Jets evened the best-of-five qualifying series 1-1 ahead of Tuesday’s Game 3 at Rogers Place.

Ehlers’ goal was his first in 23 post-season games. He redirected a Neal Pionk shot from the point at 10:24 of the third

“Did you say it’s been years?” the winger asked. “It felt great.

“That’s not usually my spot on the power play. You’ve got to get in where it hurts a little and I was able to do that today.”

Nikolaj Ehlers scored the winner for Winnipeg who equalize their series with Calgary at 1-1 after a 3-2 victory in game two. 1:15

Adam Lowry led the Jets with a goal and an assist. Rookie Jansen Harkin, who was in a trio drawing in for injured teammates, scored his first playoff goal on his first shot of the game.

Jack Roslovic contributed a pair of assists. Winnipeg starter and Vezina Trophy finalist Connor Hellebuyck made 28 saves for the win.

After scoring a pair of power-play goals in Saturday’s 4-1 win, the Flames were held scoreless on six chances.

“We have to get more bang for our buck on the power play,” Flames head coach Geoff Ward said.

“I thought they did a good job on their penalty kill. They were hungry, they won an awful lot of loose pucks so we couldn’t get into sets.”

Cam Talbot gives us an early contender for best save of the postseason, robbing Winnipeg Jets forward Kyle Connor on a breakaway. 0:48

The Jets were forced into wholesale line changes Monday in their absences as well as centre Mason Appleton’s.

“I’m proud that we won the game in the manner that we did with the injuries that we had,” Jets coach Paul Maurice said.

“It will give the people that are not familiar to our season a little glimpse of what we’ve been doing all year.”

Winnipeg’s win buys time for Scheifele and Laine to perhaps return in the series.

“We’ll see how they come to the rink tomorrow,” Maurice said.

Scheifele injured his left leg tangling with Calgary’s Matthew Tkachuk and Laine appeared to hurt his wrist in a third-period collision with Flames captain Mark Giordano on Saturday.

Maurice had accused Tkachuk of intent to injure Winnipeg’s top centre, saying he delivered a “filthy, dirty kick to the back of the leg.”

Tkachuk denied intent, but the dispute simmered into Monday with the Jets insisting it was a dirty play and the Flames defending their player.

Winnipeg controlled the first half of the game , leading 2-0 until a defensive-zone turnover by Ehlers and an own-goal by the Jets knotted the score.

Ehlers’ goal ended a 0-for-10 drought for the Jets’ power play in the series.

But Calgary couldn’t produce another equalizer, even with Talbot pulled and Jets centre Andrew Copp serving a slashing penalty in the final 22 seconds.

In part 5 of 10, Rob Pizzo breaks down the only all-Canadian matchup in the qualification round.  1:11

A Bennett rebound on an attempted wraparound deflected off the skate and stick of Jets defenceman Nathan Beaulieu and under Hellebuyck at 17:29 of the second period.

Lindholm snared an Ehlers pass intended for Josh Morrissey and put a low shot under Hellebuyck’s trapper at 11:29.

Lowry scored Winnipeg’s second goal 40 seconds after Calgary killed off a Jets two-man advantage to start the second period. He backhand-tipped a mid-air puck over Talbot’s glove at 5:43.

A backhand feed from Lowry at Calgary’s blue-line sprung Harkins for a breakaway. The 23-year-old beat Talbot with a quick high wrist shot at 7:18 of the first period.

Harkins, Gabriel Bourque and Nicholas Shaw all drew into the lineup for the injured Jets. Fake crowd noise in Rogers Place was audible for the first time Monday.

The Flames were in the Edmonton Oilers’ dressing room Monday.

Red Flames ‘C’ jerseys hung below the massive “Oilers” on the ceiling in a supremely odd optic for followers of the NHL’s Battle of Alberta.