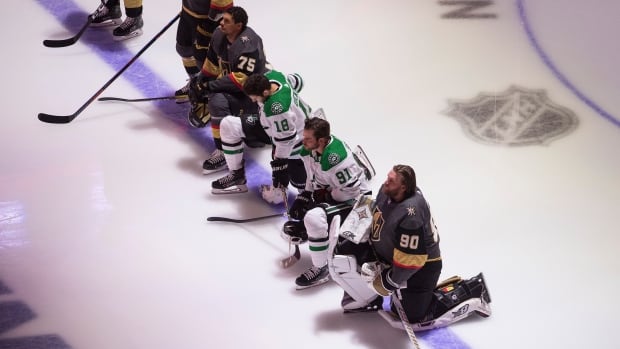 Minnesota Wild defenceman Matt Dumba says he will continue to publicly protest racial injustice as the NHL returns to action in the hub cities of Edmonton and Toronto.

On Monday, he was not alone.

Dumba was the first NHL player to kneel during the restart when he took a knee for the U.S. anthem before Edmonton took on Chicago on Saturday in the first restart game at Rogers Place. He also made a speech at centre ice before the game stressing the need for social and racial justice.

On Sunday, he raised his fist on the Wild’s bench during both the Canadian and American national anthems before Minnesota’s 3-0 win over Vancouver in the opener of their best-of-five playoff series.

The Regina native, who is half-Filipino, said he intends to do that for the rest of the NHL’s restart from the COVID-19 pandemic in homage to former Wild forward J.T. Brown.

Brown did the same during the American national anthem in 2017 as a member of the Tampa Bay Lightning to protest police brutality and racism.

Previously, NHL players hadn’t been as visible as those in other pro sports leagues — particularly the NBA and Major League Soccer — in addressing racial injustice since the death of George Floyd, a Black man, at the hands of Minneapolis police officers in May.

In the NBA, all players and staff of the Los Angeles Lakers and Toronto Raptors knelt for both the Canadian and American anthems when those teams met Saturday at the Walt Disney World complex near Orlando, Fla.

Wild players have said they support Dumba’s protest and are proud he is taking a stand. Forward Marcus Foligno led off his latest diary from inside the Edmonton bubble for The Athletic with an account of the team gathering to watch Dumba’s speech before the Edmonton-Chicago game.

Whether they join him on the ice remains to be seen, however. Wild coach Dean Evason said Monday that there has been no talk of having other Minnesota players raise a fist with their teammate before games.

“Nope, there’s been no discussions, and the only thing that we’ve discussed as a staff, as I’ve mentioned before, is that we want to eliminate racism for good,” Evason said to close Monday’s availability with reporters.