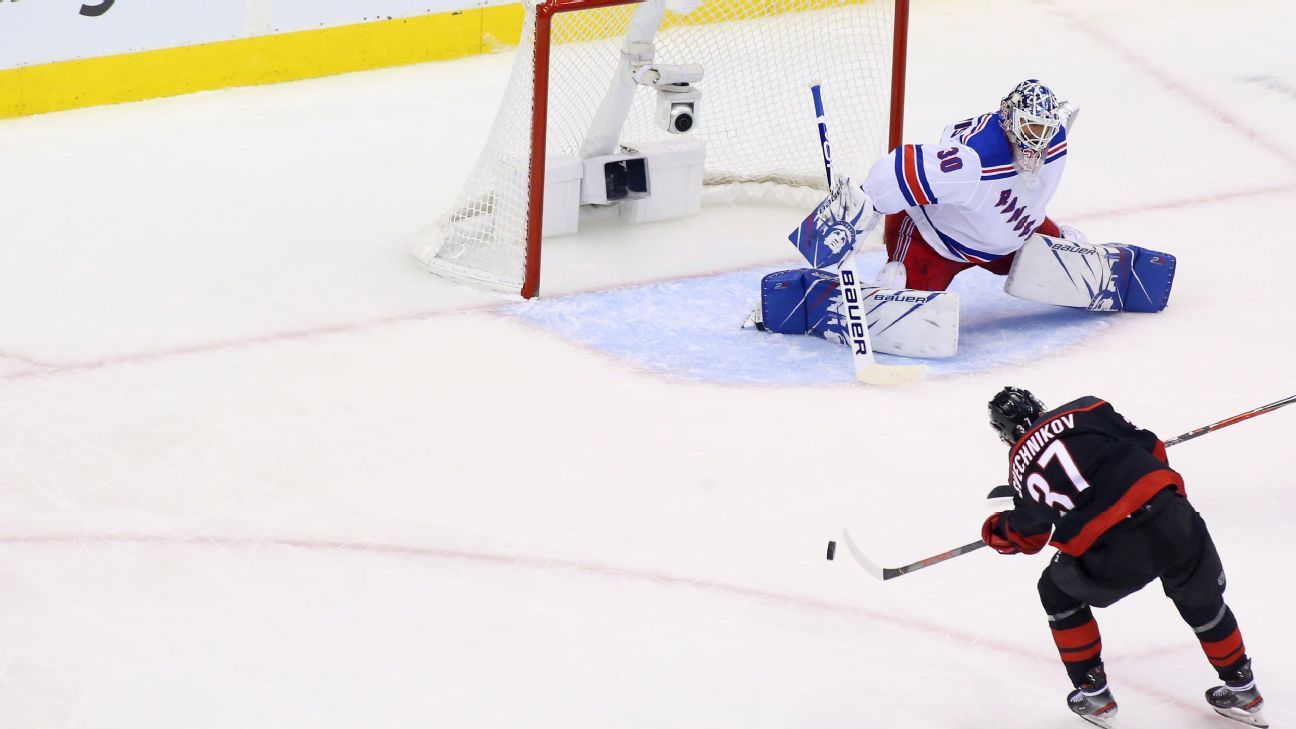 TORONTO — Carolina’s Andrei Svechnikov scored three times for the first postseason hat trick in franchise history and the Hurricanes beat the New York Rangers 4-1 on Monday for a 2-0 lead in the Stanley Cup qualifier series.

Svechnikov beat Henrik Lundqvist for the game’s first goal less than 5 minutes into the game. He followed with a power-play one-timer early in the second off a feed from Sami Vatanen, then buried a third at 14:02 of the third off a feed from Sebastian Aho — who assisted on all three of Svechnikov’s goals.

At age 20 years, 130 days, Svechnikov is the youngest player with a hat trick in the Stanley Cup playoffs since Sean Couturier did so at 19 years, 128 days in Game 2 of the 2012 conference quarterfinals against the Penguins.

Jordan Martinook also scored for the Hurricanes, following Svechnikov’s second goal 71 seconds later for a 3-1 lead in a sequence that put Carolina ahead for good.

Petr Mrazek added 23 saves for the Hurricanes, including big glove stops on Brett Howden and Mika Zibanejad in the first period.

The Rangers had swept the regular-season series, and the Hurricanes rarely led in any of those four meetings. But the Hurricanes have yet to trail in two games in Toronto and now have a chance to sweep the best-of-5 series.

Artemi Panarin scored for the Rangers, beating Mrazek in the closing seconds of a 5-on-3 power play midway through the first. Lundqvist finished with 30 saves, but lost for the second time in the postseason against the Hurricanes after going 3-0 against them in the regular season.

Game notes
New York played without winger Jesper Fast. He left early Saturday after a hard hit from Carolina’s Brady Skjei — traded from the Rangers in February — and coach David Quinn ruled him out Sunday. … Rookie goaltender Igor Shesterkin (10-2) didn’t play for the Rangers. Quinn had been uncertain Sunday on Shesterkin’s status after he was unavailable for Game 1. … Carolina defenseman Dougie Hamilton didn’t play Monday after missing Game 1 and multiple recent practices.

Game 3 is Tuesday night in Toronto.

Information from The Associated Press was used in this report.