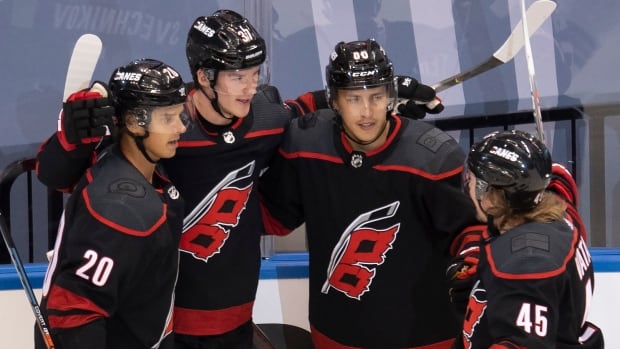 Andrei Svechnikov recorded the first postseason hat trick in franchise history to lead the Carolina Hurricanes to a 4-1 victory over the New York Rangers on Monday afternoon in Game 2 of the best-of-five Eastern Conference qualifying series in Toronto.

Svechnikov, a second-year left winger, scored a goal in each period. His last tally came with 5:58 remaining.

Petr Mrazek made 23 saves for the Hurricanes, who will vie for a series sweep on Tuesday night.

Andrei Svechnikov burned the Rangers for 3 goals in a 4-1 winning effort for the Carolina Hurricanes who take a 2-0 series lead. 1:14

Hart Trophy finalist Artemi Panarin had a goal and Henrik Lundqvist made 30 saves for the Rangers.

“I think he’ll get a few more [hat tricks] before his time’s over in his career,” Carolina coach Rod Brind’Amour said. “He’s a gamer, too. this guy is one of those players in this break that worked on this game, he wanted to get better. I think you’re seeing that.”

Svechnikov, 20, had a two-goal game as a rookie last year in the playoffs against the Washington Capitals. On Monday afternoon, he became the fifth player in franchise history with more than one two-goal performances in a playoff game.

Svechnikov’s first goal came 4:32 into the game as the Hurricanes posted an early goal for the second game in a row.

Panarin produced on New York’s 5-on-3 power-play goal to forge a tie with 7:55 to play in the first period. It was a breakthrough for the Rangers, who were 0-for-7 with the man advantage in the series opener on Saturday.

The Rangers were on fire when the NHL went on pause, Rob Pizzo examines whether or not they can rekindle that flame. 1:09

Svechnikov scored with a one-timer on a power play 71 seconds into the second period. It came as Carolina began the man advantage by winning the initial faceoff.

Martinook’s first career play goal came just 71 seconds later. He was set up on a pass from Morgan Geekie, a rookie center who notched his first postseason point. Geekie didn’t make his NHL debut until March.

Rangers goalie Igor Shesterkin was listed as “unfit to play” for the second game in a row. He was part of the team’s surge prior to the season’s interruption in March, posting a 10-2-0 record.