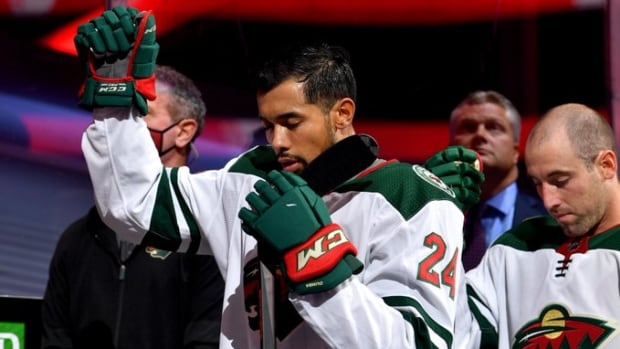 Minnesota Wild defenceman Matt Dumba raised his right fist for “The Star Spangled Banner” and “O Canada” prior to his team’s first game of the NHL’s restart against the Vancouver Canucks on Sunday at Rogers Place.

Dumba’s action came a day after he made a speech at centre ice stressing the need for social and racial justice and then kneeled for the American anthem prior to Edmonton’s first game of the restart between the hometown Oilers and Chicago. Both those teams stood in a circle at centre ice for the speech and anthems.

The Regina native said earlier Sunday he made the decision to raise his fist during the anthems for the rest of the restart after talking to former Wild forward J.T. Brown, who also raised his fist for the “Star Spangled Banner” in 2017 as a member of the Tampa Bay Lightning to protest police brutality and racism.

Dumba said raising a fist is a stronger sign than kneeling if he’s on the bench, as he may not be able to be seen by cameras in the latter scenario.

After the American anthem was played Saturday, Dumba stood for ‘O Canada’, a decision he says he regretted a day later.

“I think my biggest regret is not doing it for the Canadian national anthem as well because there needs to be a lot of light that has to be shed on what it happening in Canada and the oppression First Nations people have felt here for hundreds of years,” Dumba said in a video conference with reporters earlier Sunday.”I have First Nations and Aboriginal families that have lived it and I was disappointed looking back on it.”

Dumba, who is half Filipino, plays in a state where George Floyd, a Black man, was killed earlier this year after a white police officer kneeled on his neck.

“I kind of froze up and I know why I knelt and it wasn’t a sign of disrespect by any means. It was to shed light on the people who’ve lived through injustice and oppression, especially in my home state of Minnesota,” Dumba said.

After delivering a powerful anti-racism speech, Minnesota Wild defenceman Matt Dumba took a knee during the American national anthem prior to Edmonton taking on Chicago. 1:32

Dumba said he got the go-ahead from the NHL midway through the week to make the speech after discussions with the Hockey Diversity Alliance.

“The feeling was just crazy, I’ve never felt anything like that,” Dumba said. “(Teammate Alex Galchenyuk) said right before, ‘if you’ve got the nerves to handle this, nothing can stop you tomorrow or on this playoff run.’

“That’s how I felt. I just wanted to attack it. Stepping out, it almost felt like I was entering the ring like I was a fighter or something, seeing everyone in a circle there.”