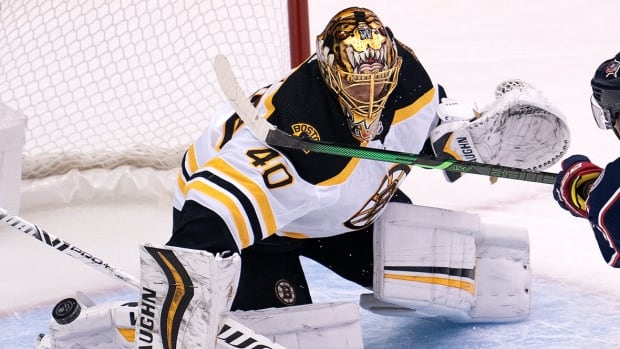 The Boston Bruins need a spark following their lacklustre opener in NHL Eastern Conference round-robin play, and they might find it right there in the team’s crease.

Goaltender Tuukka Rask missed Saturday’s practice and a disappointing 4-1 loss Sunday to the Philadelphia Flyers due to COVID-19 concerns, but the Finnish netminder is back after quarantining for two days in his hotel room.

“I had a cough, so I just clicked yes on the app, and then all kinds of red lights started blinking, and I was quarantined for two days,” Rask explained Monday. “They wanted to do two negative tests after that, and that’s it.”

The NHL announced Monday that it had conducted 7,013 COVID-19 tests in its Phase 4 Return to Play, all coming back negative.

Backup Jaroslav Halak allowed four goals on 29 shots as Boston slipped to the bottom of the round-robin standings through one set of games.

Rask, one of three finalists for the Vezina Trophy as the NHL’s top goalie, is expected to be in goal Wednesday when the Bruins (0-1-0, 0 points) play their second round-robin game, facing their Atlantic Division rival Tampa Bay Lightning (1-0-0, two points).

Puck drop at Toronto’s Scotiabank Arena is at 4 p.m. ET.

Tampa Bay won three of the four contests during the regular season, and all but one — a 5-3 Lightning win in Boston less than a week before the NHL paused the season — ended with one-goal margins of victory.

A major reason for the tight results is the defensive play from both sides and the dominant presence in net. The game should pit the fifth matchup between Rask and Tampa Bay’s Andrei Vasilevskiy, also a Vezina finalist.

The Lightning earned a 3-2 shootout win Monday afternoon over the Washington Capitals. Nikita Kucherov scored in regulation and clanged home the game-deciding goal off the right post behind Washington’s Braden Holtby in the shootout’s third round.

WATCH | Highlights of Flyers’ win over Bruins in round-robin opener:

It took just 8 seconds for Philippe Myers to strike back after a Bruin goal to help Philadelphia to a 4-1 win over Boston. 0:51

Tampa Bay squandered a 2-0 lead as Washington scored a pair late in the second period, but the 65 game minutes were a slugfest of hard shots, late hits, roughing, charging and overall brutally physical play.

The Lightning won the game by one goal, and they won the physical category by one body-to-body blow, edging Washington 45-44 in hits.

“We’ve brought in some players who have helped us in that regard immensely,” Lightning head coach Jon Cooper said of the physical play. “It’s a man’s game when you get in the playoffs.

“The confidence of our group and the no-back-down attitude is definitely something we’ve noticed and was something that was there tonight against one of the best teams in this league.”

Maroon, now 32 and a forceful six-foot-two, 236-pound left-winger, had three hits and an assist against Washington.

“We were in their face. That’s the kind of team we need to be and have that mentality to push back. Don’t let them run around,” he said. “I thought we did a good job not getting frustrated when they threw big hits.”