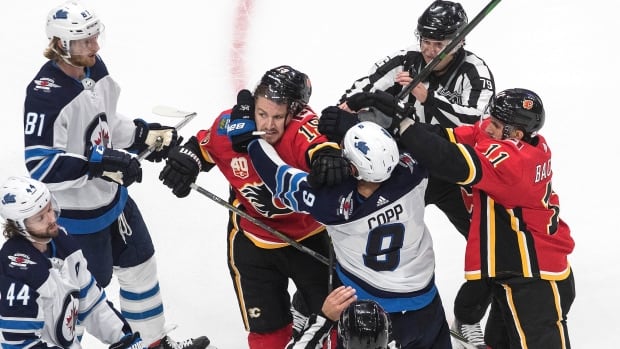 Matthew Tkachuk is accustomed to the less-than-complimentary adjectives opposing players/coaches/fans use to describe his playing style.

The Calgary Flames forward won’t win any popularity contests in 30 NHL cities, but Calgarians adore the curly-haired sparkplug with the dangling mouthpiece.

Certainly, the 22-year-old is the key player to watch for Calgary in Tuesday’s Game 3 between the Flames and the Jets. Their Stanley Cup qualifying series is tied 1-1.

“He’s dealt with it well up until this point in his career,” Flames captain Mark Giordano said of the constant criticism directed at Tkachuk. “He’s had some rivalries between him and other guys in the league, plays on the edge all the time and he’s one of our best players who is clutch in the moment. So that’s what we’re expecting of Chucky.

“He plays on that line.”

In the eyes of the Winnipeg Jets, Tkachuk crossed the line Saturday in a collision that saw Winnipeg centre Mark Scheifele crumple to the ice.

“He went after the back of the leg,” Winnipeg head coach Paul Maurice said. “He could have cut his Achilles. He could have ended the man’s career.It’s an absolutely filthy, disgusting hit.”

Tkachuk received no penalty on the play and no supplementary discipline. Still, Maurice reiterated his revulsion Sunday, perhaps in a bid to get the officials to keep a close eye on Tkachuk.

“If you sin once, are you a sinner? Sin 10 times?” Maurice said. “I don’t think he came off the bench and said, ‘Hey I’m going to see if I can go stab the back of Mark Scheifele’s leg with my skate.’ I  think he got to that point, and I think that’s exactly what he did.”

Winnipeg forward Adam Lowry simply labelled it “reckless” for Tkachuk to lift his skate while finishing his check, leaving Scheifele with a suspected leg laceration.

“It’s such an accident,”Tkachuk said after the game. “I felt terrible.”

Paul Maurice didn’t mince words in his post-game press conference when addressing the incident that took place between Matthew Tkachuk and Mark Scheifele. 6:25

Controversy is constant when it comes to Tkachuk, who grew up underfoot in  the St. Louis Blues dressing room with his dad, NHL legend Keith Tkachuk.

The elder Tkachuk collected 538 goals and 1,065 points in his 18-year-NHL career. Like his eldest son, Keith loved the rough stuff, registering 2,219 penalty minutes.

Back in March 2019, Los Angeles defenceman Drew Doughty generated headlines by saying he had “no respect” for Tkachuk.

Earlier this season, Edmonton forward Zack Kassian called Tkachuk a “young punk”, and Oilers fans dressed up as turtles to make fun of the Calgary forward for refusing to fight in a Jan. 11 instalment of the Battle of Alberta.

“I think his game is best when he’s playing on that edge — not unlike a lot of other top guys in the league,” Giordano said in January. “One of his best qualities ever since he came into the league is that he’s able to ramp it up in big games.”

The Flames need Tkachuk to ramp it up in the next big game. Somehow, with both Scheifele and star winger Patrik Laine out of the lineup, the Jets gutted out a 3-2 win Monday to tie the series.

WATCH | Ehlers gets winner as Jets even series:

Nikolaj Ehlers scored the winner for Winnipeg who equalize their series with Calgary at 1-1 after a 3-2 victory in game two. 1:15

Tkachuk gave the Flames a chance to score the winner by drawing an undisciplined penalty on Winnipeg forward Nikolaj Ehlers in the third period. But Calgary couldn’t convert.

Tkachuk led the Flames in scoring this season with 61 points in 69 games. Through the first two qualifying games, Tkachuk has failed to collect a point.

He’s done what the coaches wanted in terms of annoying and distracting the Jets. Now he needs to contribute on the scoreboard for Calgary to advance.